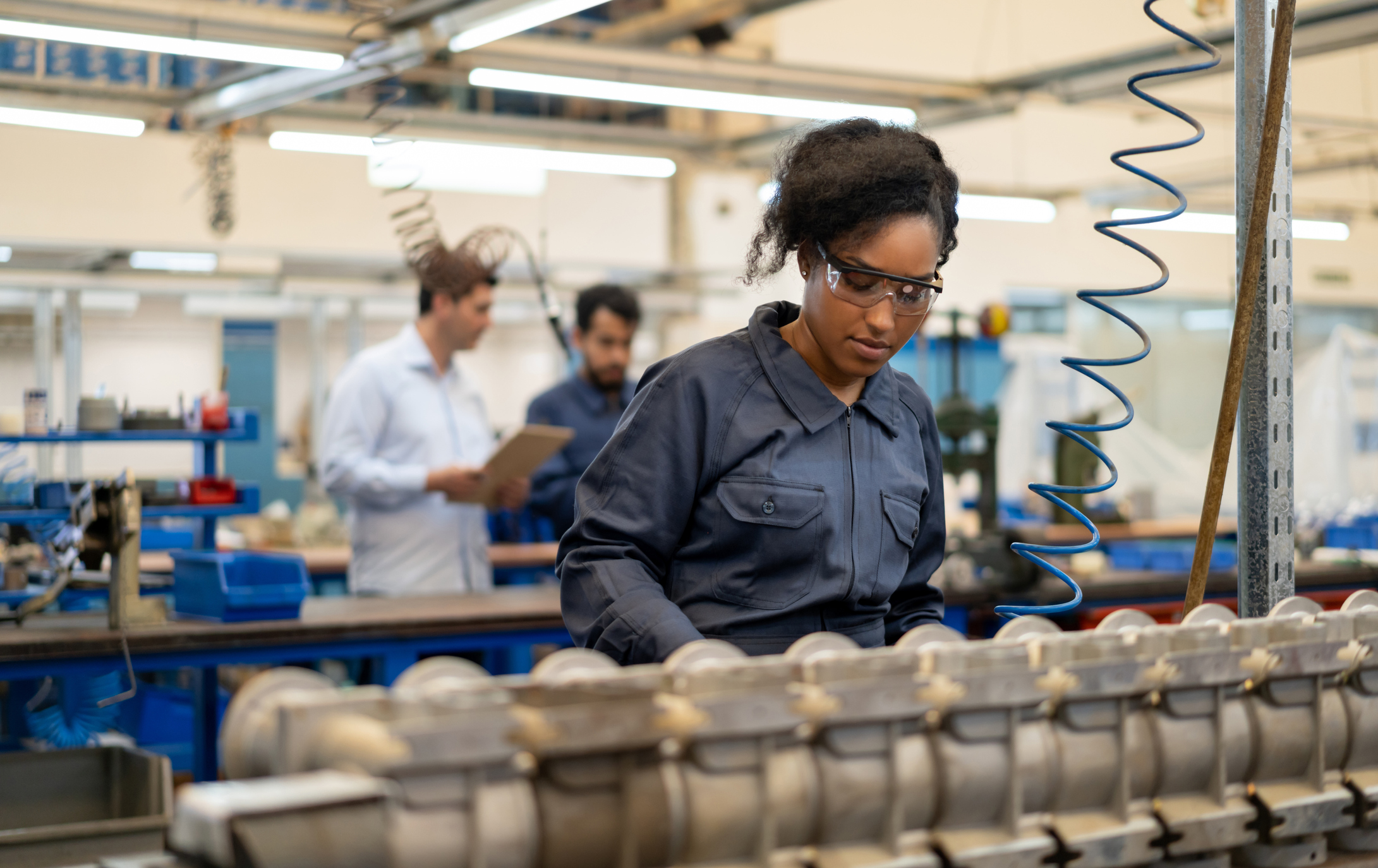 The White House budget & Black communities: Joint Center Workforce Policy Director Dr. Alex Camardelle published an analysis explaining how President Biden’s budget would support Black workers and families, and where it falls short: “To ensure a just recovery for Black communities, we need bold investments. Congressional approval of the Biden budget would be a step in the right direction. Let this budget be the foundation from which the current and future administrations and Congresses build.”

Broadband access: Dominique joined a private virtual event hosted by Consumer Reports to discuss ways to improve broadband across the United States. In July, Dominique will release the Joint Center’s most recent work on expanding broadband in the Black Rural South.

The future of work in counties: Alex joined the National Association of Counties (NACo) at the organization’s Counties at Work Virtual Summit for a conversation entitled “Ensuring Equitable Planning for the Future of Work” with NACo First Vice President and of DeKalb County (Georgia) Commissioner Larry Johnson.

The path ahead for workforce development: Alex joined the Federal Reserve Bank of Cleveland’s “Policy Summit 2021: Pathways to Economic Resilience in Our Communities” for a deep dive policy discussion on workforce development amid the COVID-19 pandemic and moving forward. The Fund for Our Economic Future Job Preparation Director Bishara Addison joined him for the conversation. 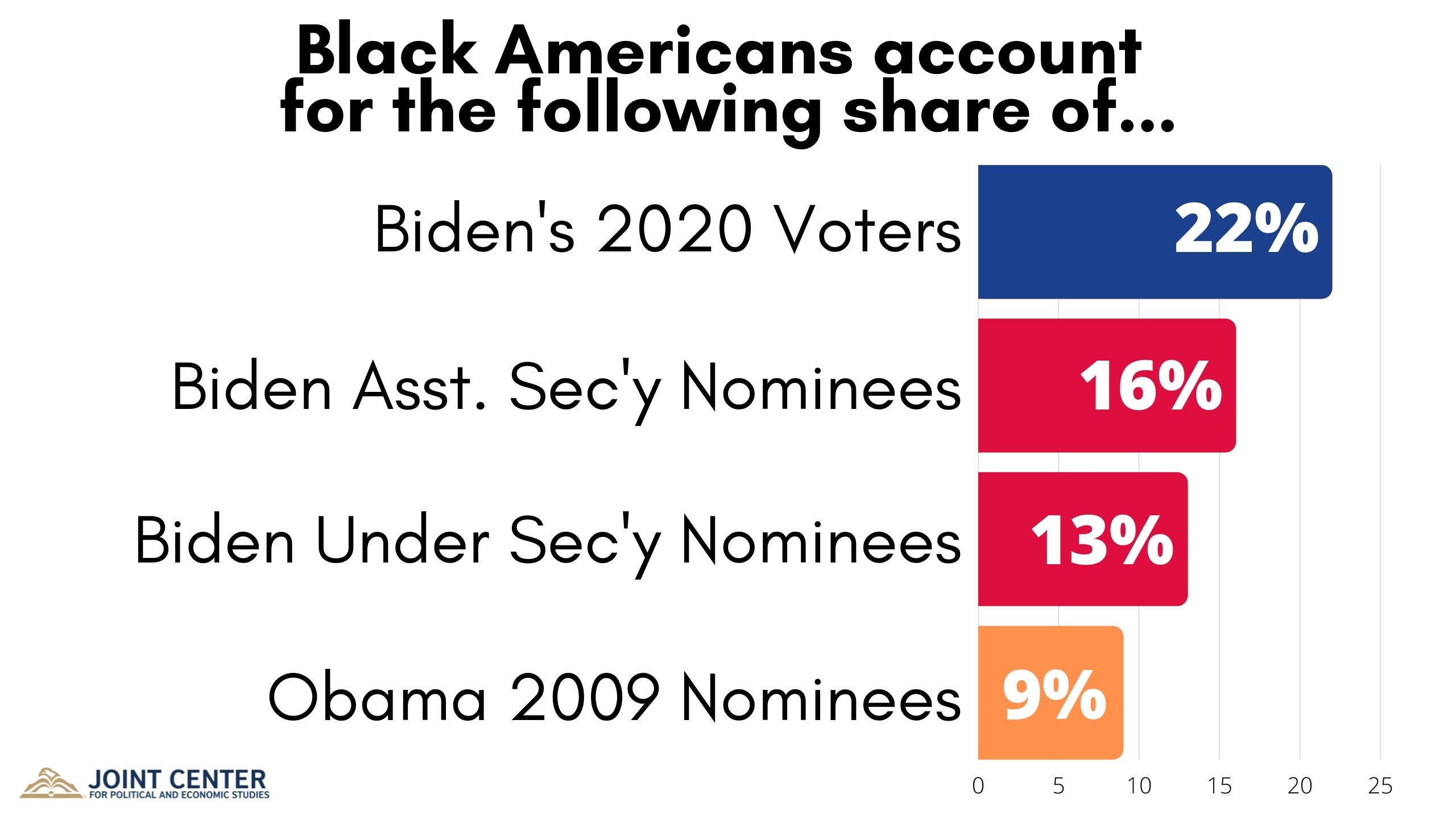 How’s Biden faring on Black nominees? The Joint Center’s Black Talent Initiative program released a report card analyzing the diversity of the Biden administration’s Black Assistant Secretary and Under Secretary nominations. As of June 18, 2021, Biden’s Black nominations for Assistant Secretary (16%) and Under Secretary (13%) positions fell short of the percentage of his voters who were African American during the 2020 general election (22%), but exceeded the Black share of President Obama’s Senate-confirmed appointees to various positions in 2009 (9%).

On NPR talking voting reform: NPR’s All Things Considered devoted a segment to interviewing Joint Center President Spencer Overton about federal reforms to prevent attempts to restrict voting rights in states like Georgia: “Bipartisan election reform depends on whether the future of the Republican party is controlled by those who use government to restrict the freedom to vote and prevent competitive elections, or those who want to use the concepts of limited government and free competition to reach out to and appeal to an increasingly diverse America. In the 1960s we saw the Democratic party undergo such a realignment by squarely rejecting the Southern Dixiecrats and joining with many Republicans to pass the Voting Rights Act of 1965.” Listen to the full six-minute interview here.

Support for congressional staff: Joint Center analysis was mentioned in a HuffPost article on Rep. Alexandria Ocasio-Cortez’s (D-NY) call for higher wages for congressional staffers to increase diversity on the Hill: “The lack of diversity on the Hill can be traced directly to our failure to pay staff a living wage.” Joint Center data found that while people of color account for 40 percent of the U.S. population, they only accounted for 11 percent of top staff in Senate personal offices in 2020 and 13.7 percent of top staff in the House in 2018. Last week, the U.S. House Committee on Appropriations released its draft bill, which proposes increasing funding for internships to “support more interns from working and middle-class families,” and doubling the funding available for the House Office of Diversity and Inclusion. The Joint Center will release a report on top staff diversity among Senate committee offices this summer.

Urging a study on benefits for House staff: The Joint Center signed a letter to U.S. House of Representatives Chief Administrative Officer Catherine Szpindor urging the office to conduct a study on the current benefits available for House staff. The letter asks the office to analyze staffers’ pay as lesser compensation, unpaid internships, and underpaid entry-level positions damage Congress’s ability to attract a diverse workforce or establish a diverse pipeline of talent. Other signatories include Bipartisan Policy Center Action, College to Congress, Demand Progress, Issue One, NALEO Educational Fund, Pay Our Interns, and more. Read the letter here.

The Joint Center is seeking a Vice President of Communications to help to develop and implement an innovative integrated communications strategy to amplify and advance the Joint Center’s strategic audience engagement, research priorities, and growth ambitions. Learn more about the position and how to apply here.

The Joint Center is seeking a Vice President of Finance and Operations to co-create a vision of success for building the organization that inspires staff and creates holistic and flexible systems that support the Joint Center’s growth plan and are aligned and in service of the organization’s mission and values. Learn more about the position and how to apply here.

On July 1, Spencer will join Shorenstein Center Research Director Joan Donovan and Free Press Co-CEO Jessica González to participate on NetGain Partnership’s panel on “Can federal policy reduce the harms of mis/disinformation on platforms?” RSVP for the free event here.