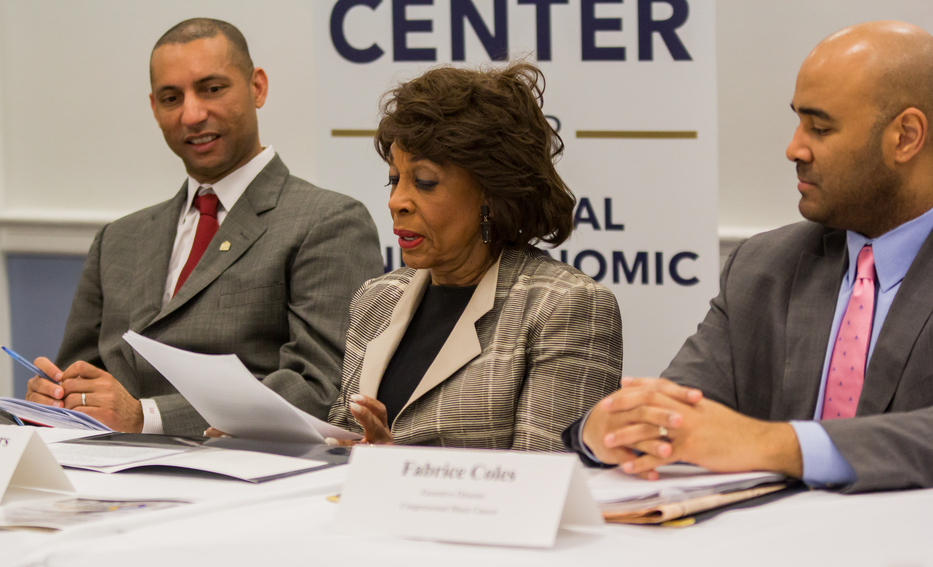 2017 was a successful but challenging year. In May, we lost the most significant figure in our history, former Joint Center President Eddie Williams.

With the support of the Ford Foundation, we also engaged in a strategic planning process, which we will complete in early 2018. The process is allowing us to sharpen our focus, identity, and effectiveness, but it is also requiring tough choices that will not please everyone.

In 2017 our team produced work that is essential to the economic and political future of African Americans.  On economic studies, we published groundbreaking research on

On political studies, our efforts resulted in:

Our successes would not have been possible without your consistent support and without our committed team. 2017 was an important step in our journey. With your help, we’ll do even more in 2018!

Details are below, and click here or above to watch our 3-minute video.

The Future of Work: The Joint Center published Race and Jobs at High Risk to Automation, which showed that 31% of Latino workers, 27% of Black workers, 24% of White workers, and 20% of Asian American workers are concentrated in just 30 jobs at high risk to automation (e.g., cashiers, drivers, cooks, and more).

We also released an Impact of Automation on Black Jobs data brief at a session at the Congressional Black Caucus Annual Legislative Weekend (hosted by Rep. Lisa Blunt Rochester). We organized an event on workers of color and STEM with API at George Washington University.  We also spoke on the future of work at events organized by the American Association of Blacks in Energy, the Congressional Black Caucus Tech & Infrastructure Development and Education & Labor Task Forces (Blue-Collar STEM), Google, LinkedIn, the National Action Network, the National Urban League, Politic365, and Rainbow PUSH.  We also participated in expert dinner conversations on the future of work organized by the Silicon Valley Community Foundation, Google, and Path Forward.

5G, Smart Cities & Communities of Color: How can leaders in communities of color maximize new opportunities and mitigate challenges stemming from the next generation of wireless technology (5G) and Smart Cities technologies? The Joint Center’s 55-page report, infographics, and report video, as well as companion videos (Smart Cities, Day of Equity-5G, and Day of Equity-Smart Cities) answer these questions. The Joint Center also presented on these issues at conferences of the African American Mayors Association, the Congressional Black Caucus Annual Legislative Weekend (hosted by Congresswoman Yvette Clarke), MMTC (February and July), the National Organization of Black County Officials, the National Organization of Black Elected Legislative Women, Politic365, and a policy forum in Napa Valley.  We also talked about the issue on Roland Martin’s News One Now television show.

Congresswoman Eddie Bernice Johnson speaks at release of data on Business Tech Use.

The Use of Digital Tools by Black & Latino Businesses: The Joint Center partnered with the U.S. Black Chambers, Inc. and U.S. Hispanic Chamber of Commerce to survey their members about technology use in September and October of 2017, and issued this report with findings.  We released the data at this lunch event at the U.S. House of Representatives featuring remarks from Representatives Nydia Velazquez (Ranking Member, House Small Business Committee), Eddie Bernice Johnson (Ranking Member, House Committee on Science, Space and Technology), Dwight Evans (Ranking Member, House Subcommittee on Economic Growth, Tax and Capital Access), Gregory Meeks (Senior Member, House Financial Services Committee), and Lisa Blunt Rochester (Member, Education and Workforce Committee). The Joint Center also hosted live case studies of businesses using tech tools at conferences of the U.S. Black Chambers and the U.S. Hispanic Chamber of Commerce.  Further, the Joint Center traveled to Dallas to participate in “Equalizing the Playing Field of Black Business Ownership in the U.S.” organized by ABFE-A Philanthropic Partnership for Black Communities and the Council on Foundations.

Midwest Roundtable participants at Focus: HOPE, a Detroit organization that aims to overcome racism and poverty by providing education and workforce training to people of color

Elected Officials, the Future of Work & Economic Development: The Joint Center partnered with the African American American Mayors Association and Comcast in hosting the 2nd Annual Technology Summit in Philadelphia. Elected officials and experts discussed the role technology plays in the development, investment, and growth of America’s cities. The Joint Center also convened 20 of the Midwest’s most innovative and influential elected officials and economic development leaders of color for a 2-day Roundtable of the Midwest roundtable in Detroit, Michigan, which covered the future of work, equitable development, and related topics.

Shared Insights from Corporate Diversity Leaders: We brought together senior Democratic and Republican staffers to discuss diversity with corporate and public sector leaders in diversity.

Partnered with NALEO: At a reception we organized featuring Rep. Barbara Lee and Rep. Ileana Ros-Lehtinen, we announced our new partnership with NALEO Educational Fund—Staff Up Congress. The collaboration will maintain a joint database of candidates, and will help identify, develop, and help place Black and Latino candidates into Hill staff positions.

Researched Diversity Among Top House Staff: Throughout 2017, the Joint Center researched diversity among U.S. House Chiefs of Staff, Legislative Directors, Communications Directors, and Committee Staff Directors, and we hosted a lunch with top House staff of color and several meetings of staff association leadership to provide updates and obtain insights. We will continue this work and release a report on the data in 2018.

Encouraged U.S. Senator-Elect Doug Jones (AL) to Advance Diversity: The Joint Center organized 16 other organizations to submit this letter to Senator-elect Jones. We released this press release and this updated fact sheet on the issue. Our efforts resulted in AL.com and Washington Post coverage, and we are currently working with the transition team to identify strong staff candidates.

As a Result of the Efforts of the Joint Center and Our Many Allies:

Other Political Studies Activities: In addition to advancing congressional staff diversity, the Joint Center published a policy brief and video on LIHEAP, a federal program that provides energy to low-income households of color. We also organized policy breakfasts with House Speaker Chief of Staff Jonathan Burks and HUD Secretary Dr. Ben Carson with Insight America.  We served as co-host of the Celebration of the 40th Anniversary of the Senate Black Legislative Staff Caucus, the Black44 Conference (professional development workshop for Black Obama Administration appointee alumni), and the Reflections on the Impact of the Reconstruction Amendments research symposium with Duke University at the National Archives. We also organized a breakfast for Black foundation executives and CBC Members with ABFE: A Philanthropic Partnership for Black Communities.

The Legacy of the Joint Center—Eddie Williams

This year the Joint Center mourned the loss of Eddie Williams, who served as Joint Center President from 1972-2004 and passed away on May 8, 2017.

As Congresswoman Eleanor Holmes Norton stated, while individual Black public intellectuals existed before the Joint Center, Eddie brought them together with a platform that allowed them to collectively provide rigorous research, public policy solutions, and technical assistance. Eddie commissioned and published surveys of Black Americans, and effectively produced information about African Americans that is not available anywhere else.

Click here for a detailed overview of Eddie’s life and statements from President Clinton, President Obama, and many others.

The Future of the Joint Center—Strategic Planning Process

With support from the Ford Foundation, in late 2016 the Joint Center started a strategic planning process.
In 2017, we held several in-person listening sessions about the future of people of color with groups of community activists and elected officials in Tunica, Mississippi, as well as with groups of experts in technology and race, health, financial services, energy, and transportation. We traveled to Seattle (once) and Silicon Valley (seven times) to meet with leaders in technology and equity and get their thoughts. Our consultant conducted extensive one-on-one interviews with top elected officials, civil rights leaders, foundation officials, and private sector representatives, as well as a top congressional staffer and a futurist.

The Joint Center meets with transportation experts to discuss issues key to communities of color for our strategic planning process.

We learned several things, including that: 1) the African American community faces unique challenges and needs a think tank to provide data and actionable solutions; 2) with finite capacity, the Joint Center should master a narrow group of defined but high-impact economic and political issues —like future of work (click here for a 2-minute video) and congressional staff diversity —and then gradually add other issues; and 3) the Joint Center should not duplicate the efforts of established Black membership organizations, but should partner with them to create briefs, videos, and other content with actionable solutions tailored to their members (e.g., Black mayors).
We are continuing to receive feedback, and we are looking forward to finishing the process and starting to implement the plan in the first quarter of 2018.

Thanks to Our Supporters

Roland Martin: For over a year Roland Martin allowed us to fortify our connection to our community by giving the Joint Center a weekly panel spot on News One Now, the only daily television news show for African Americans. Roland appreciates the need for a Black think tank, and he has consistently supported the Joint Center. December 21, 2017 was the last day of Roland’s award-winning show, and we look forward to his continued contributions to our community.
Board: The Joint Center’s board consists of Barbara Johnson (chair), Scott Bolden, Paula Boyd, Chris Kang, Robert Hagans, Chanelle Hardy, Beverly Perry, Dianne Pinderhughes, Robert Raben, Vincent Sarmiento, and Paul Thornell.