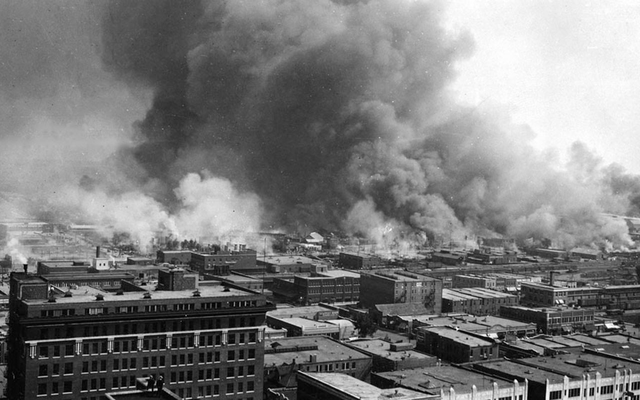 Economic equity 100 years after the massacre on Black Wall Street: President Joe Biden will visit Tulsa, Oklahoma on June 1 to commemorate the 100th anniversary of the Tulsa Massacre, and Stacey Abrams will keynote a commemoration. The commemoration comes after three survivors of the Tulsa massacre testified before Congress last week for a House Judiciary subcommittee “considering reparations for survivors and descendants of the massacre.” To start to address systemic inequity in the economy, the Joint Center’s 100-Day report called on President Biden to appoint African Americans to top financial regulator positions. None of Biden’s nominations so far have been Black (e.g., CFPB, NCUA, and SEC heads), and hopefully, Biden will nominate Black leadership for current openings (CFTC & OCC heads) and upcoming openings (the Federal Reserve, FDIC, and FHFA heads). The report also urges him to ensure better Black representation in key Under Secretary and Assistant Secretary positions at Commerce and Treasury.

One year later: President Biden and Vice President Kamala Harris met with George Floyd’s family one year after he was murdered by police. After the meeting, President Biden called the guilty verdict of Derek Chauvin an “important step forward toward justice” and called for support for the George Floyd Justice in Policing Act. Vice President Harris echoed his sentiments and noted that “one verdict does not address the persistent issue of police misconduct and use of excessive force.” The Hill reports the bill may be gaining momentum, and also reflects on the emotional toll on Black communities over the last year in light of police killings of African Americans and the pandemic.

Biden’s budget plan expected to leave out significant debt relief: The upcoming White House budget proposal will focus on legislative agendas already introduced this year. Among the several initiatives expected to be left out of the new budget plan is $10,000 in student debt cancellation. Black borrowers, compared to their white peers, typically owe 50 percent more in student debt upon graduation. For Black households, “a lack of generational wealth risks making student debt a long-term financial burden.”

Extreme weather funding must account for Black communities: President Biden announced his $1 billion spending investment to prioritize Americans safety and readiness during extreme weather events that “put on vivid display any failure to respond.” As demonstrated following Hurricane Katrina and other weather events, the government’s past failures in responding to natural disasters have devastated many Black communities in the South that are particularly vulnerable to hurricane season because of concentrations in “low-lying, flood-prone, and amenity-poor segments of urban areas.” Additional spending must prioritize disaster planning, response, and recovery in Black neighborhoods.

Infrastructure plan on a standstill: Efforts to reach an agreement on a bipartisan infrastructure proposal is “on life support” as Democrats and Republicans are $1.5 trillion apart on a final investment price tag. President Biden made it clear that he wants a bipartisan agreement and may not signal support for Democrats to move forward if there “isn’t movement toward a compromise by the end of this week.”

CBC commemorates the 100th anniversary of the Tulsa Massacre: Congressman Hank Johnson (D-GA) will host a Congressional Black Caucus event on Thursday, May 27, at 8 pm EST, “Remembering the Greenwood Massacre: 100 Years from Tulsa to the Insurrection — Reconciliation, Restoration & Reparations.” 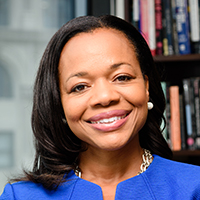 Kristen Clarke confirmed as Assistant Attorney General for the Civil Rights Division at DOJ. With a senate vote of 51 to 48, Ms. Clarke was confirmed as the first Black woman to lead the division since its establishment in 1957. Throughout her longtime career as a civil rights attorney, she has advocated for the enforcement of voting rights laws and has prosecuted cases involving police brutality, hate crimes, and human trafficking. Ms. Clarke was a priority candidate for the Joint Center’s Black Talent Initiative. See statements from Joint Center President Spencer Overton, Lawyers’ Committee for Civil Rights Under Law, NAACP, and NAACP LDF. 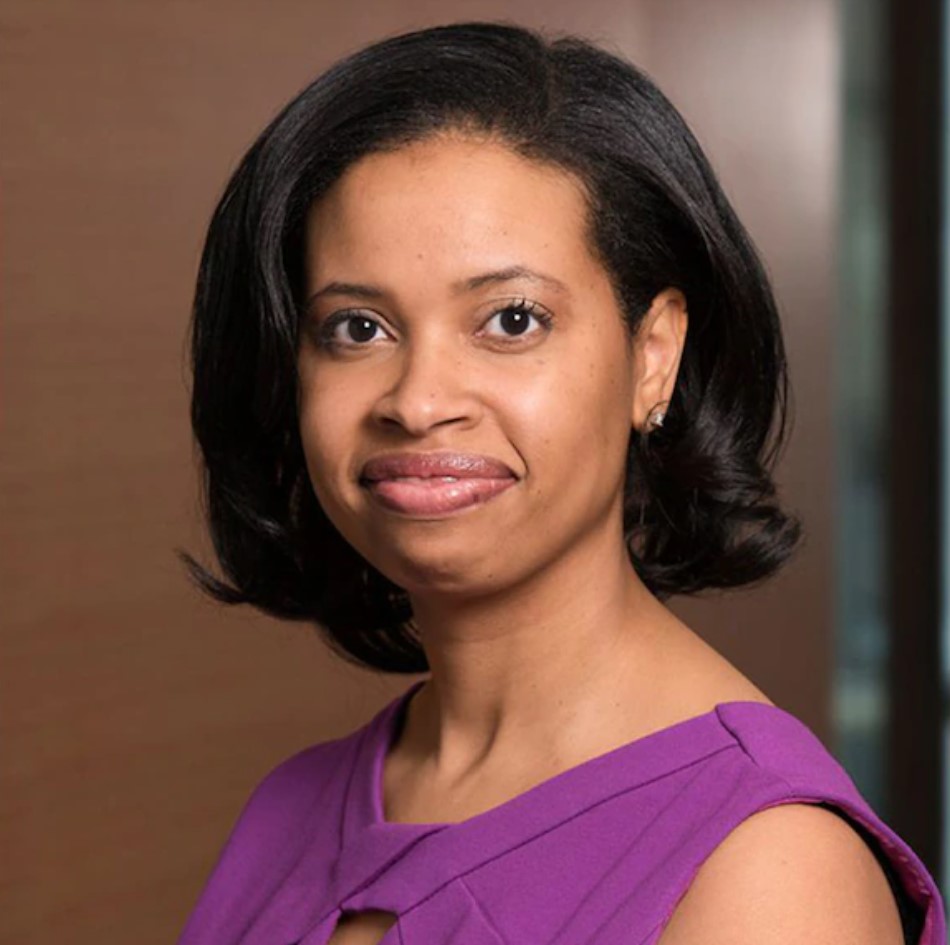 Chiquita Brooks-LaSure confirmed as Administrator for the Centers for Medicare and Medicaid Services at HHS. The Senate vote was 55 to 44, placing Ms. Brooks-LaSure as the first Black woman to lead the second-most powerful post at the Department of Health and Human Services. She played a key role in the passage and implementation of the Affordable Care Act (ACA) when she served as a senior official under President Barack Obama. Prior to joining the Biden Administration, she served as the managing director at Manatt, Phelps & Phillips, LLP, a health consulting firm. Ms. Brooks-LaSure was a priority candidate for the Joint Center’s Black Talent Initiative. 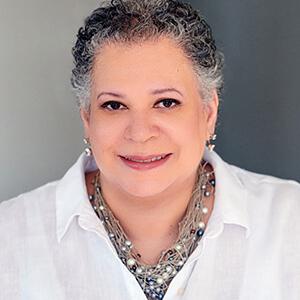 Biden appoints Hazel Ruth Edwards to be a member of the Commission on Fine Arts. Since 2016, Dr. Edwards has been a professor and Chair of the Department of Architecture, College of Engineering and Architecture at Howard University. She was appointed as the first female to chair the department in 2016. 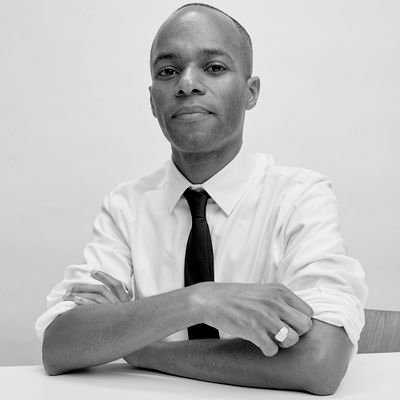 Biden appoints Justin Garrett Moore to be a member of the Commission on Fine Arts. Mr. Moore is currently the Inaugural Program Officer of the Humanities in Place program at the Andrew Mellon Foundation.

Joblessness hits new lows: Initial claims for unemployment benefits dropped to 440,000, the lowest level since the beginning of the pandemic.

Make public works inclusive: This time around make inclusivity a priority in the government push to create infrastructure jobs, the Brookings Institution argues. The Works Progress Administration (WPA) largely excluded Black workers, and in October 1942 white workers held nearly 80 percent of all WPA jobs. Today, seven of the ten infrastructure jobs with the highest percentage of Black workers pay less than the sector’s median wage of $21.47.

Business gentrification: Gentrification and COVID-19’s economic disruption accelerated the displacement of many small businesses. CityLab reports that businesses owned by people of color are concentrated in neighborhoods that have long been subject to disinvestment and, without state and local policy change, may face commercial displacement.

Make family supports permanent: The Center for American Progress calls for the permanent expansion of the Child Tax Credit and the Earned Income Tax Credit to begin to eliminate structural inequities in the tax code. Typically, more than half of Black children are ineligible for the full Child Tax Credit because their household incomes are too low, while only 23 percent of white children face this barrier.

Black renters evicted more often: An eviction crisis in central Florida continues to heavily affect renters in Black neighborhoods. In predominantly Black ZIP codes in Orange, Osceola, and Seminole counties, the eviction rate is significantly higher than in nearby predominantly white ZIP codes, according to the Shimberg Center for Housing Studies at the University of Florida and an Orlando Sentinel analysis.

Washington assesses its new leave policies: The state’s paid family and medical leave benefits were the focus of listening sessions in Black and other communities of color in Washington State. Among the key takeaways were the persistence of racial and gender stereotypes in the workplace and the need for stronger worker discrimination protections when seeking access to benefits. 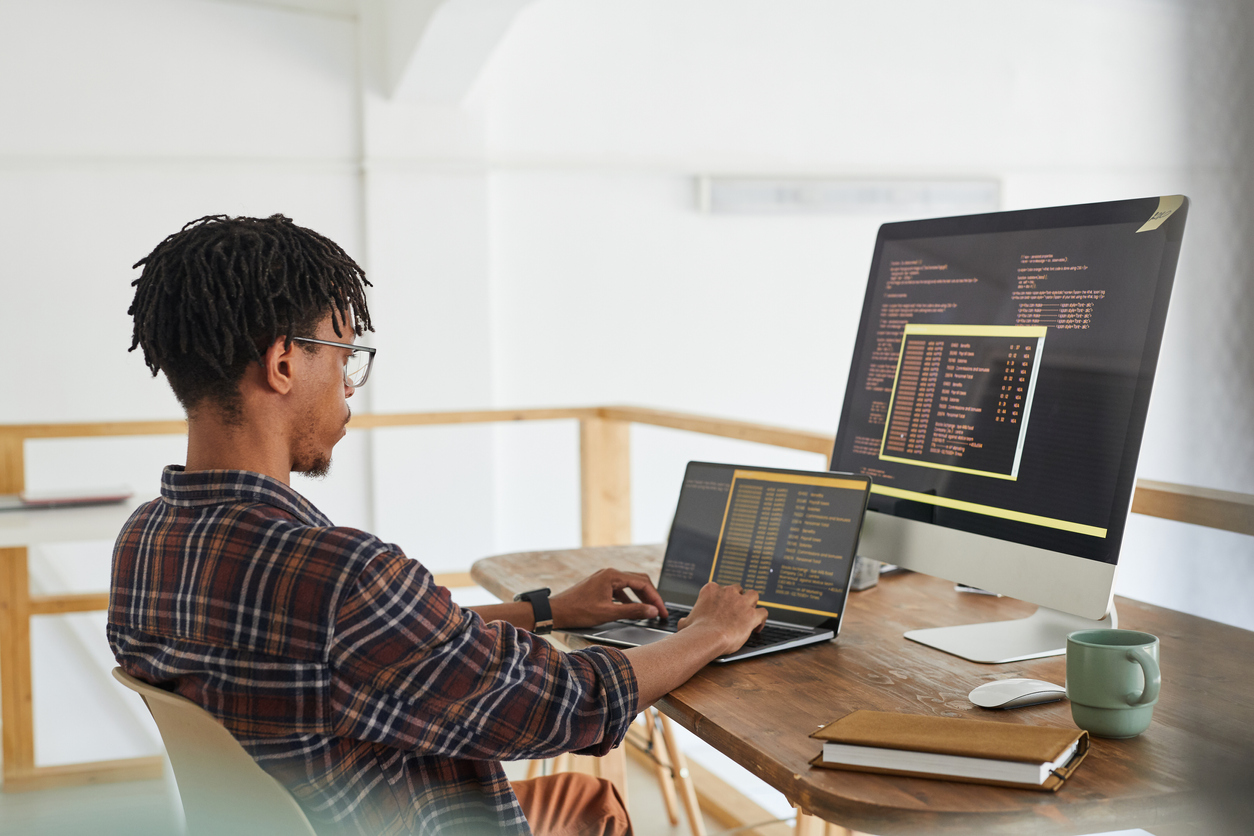 Meaningless pledges: Tech companies that made statements in support of the Black Lives Matter movement had 20 percent fewer Black employees than companies that did not pledge, a new study of diversity in the tech industry finds. The study of 240 companies was conducted by Blendoor, a Black-owned company founded by Stephanie Lampkin and focused on diversity recruitment in the tech industry.

Cropping out Blackness: Twitter’s image-cropping algorithm tends to exclude Black people from photos, the company finds. White people are 4 percent more likely to be included in a photo than their demographic representation would warrant.

Twilio misstep: Twilio, a Silicon Valley company with a progressive reputation for explicit anti-racism, was called out for selling its services to Global Tel Link, a prison telecommunications vendor accused of price-gouging, the American Prospect reports.

Prioritize young people: Economic recovery is not complete without a national plan of employment for young workers who are increasingly disconnected from school and work, argues New America.

New paths to BAs: A system of incremental credentialing can help students of color earn workplace certifications of immediate value as intermediate steps toward a bachelor’s degree, the Lumina Foundation argues. 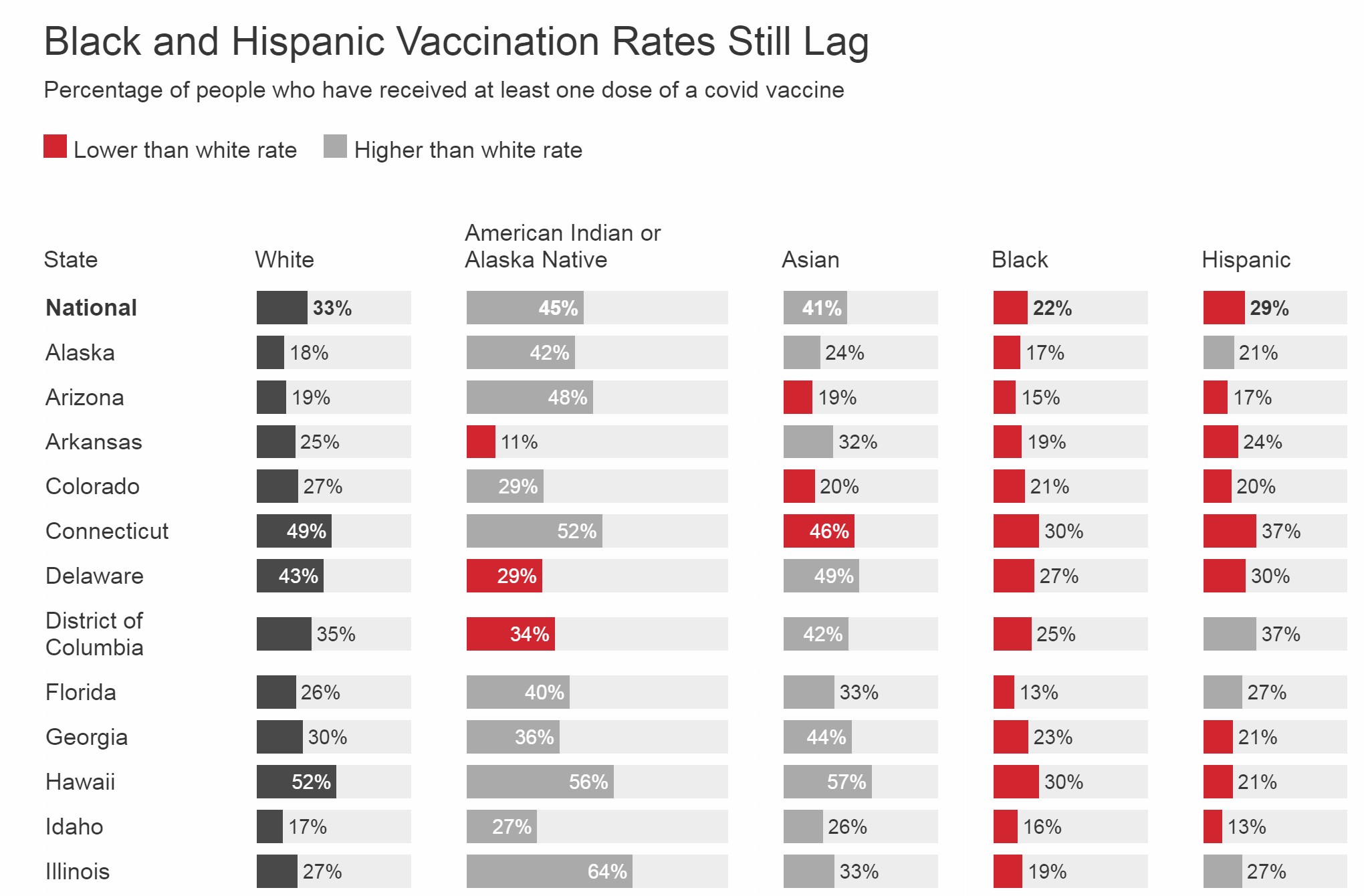 Race and the vaccine: Vaccination disparities by race persist, the Kaiser Family Foundation finds (chart above). As of May 17, only 22 percent of Black people have received at least one shot, compared to 33 percent of whites.

LA grapples with vaccine gaps: In Los Angeles county, racial gaps in vaccines must be narrowed if the region is to achieve herd immunity and end the pandemic, officials warned. Only 37 percent of Black residents aged 12 and over have received at least one dose of the vaccine compared to 60 percent of white residents.

Chicago chases vaccine parity: Neighborhoods of color in Chicago have the lowest vaccination rates, the Chicago Sun-Times reports based on new data by ZIP code. Citywide, about 55 percent of white residents have at least one shot versus only 32 percent of Black residents.

NYC goes door to door: In New York City, 59 percent of all residents, but only about 33 percent of Black residents, have received at least one vaccine dose. Public health officials have begun a door-to-door campaign to overcome vaccine resistance and help those with limited access to vaccinations.

Data gaps impede progress: Failure to collect quality race-ethnicity data on COVID-19 testing, morbidity, mortality, and vaccinations—despite federal mandates to do so—is a significant impediment to the health care system’s response to the pandemic. During the initial month of the vaccine rollout, data on race and ethnicity was missing for 48 percent of those vaccinated.

Barbershops help out: In Prince George’s County, Maryland, a network of Black barbers and hair salons are working to overcome vaccine hesitancy in Black communities. 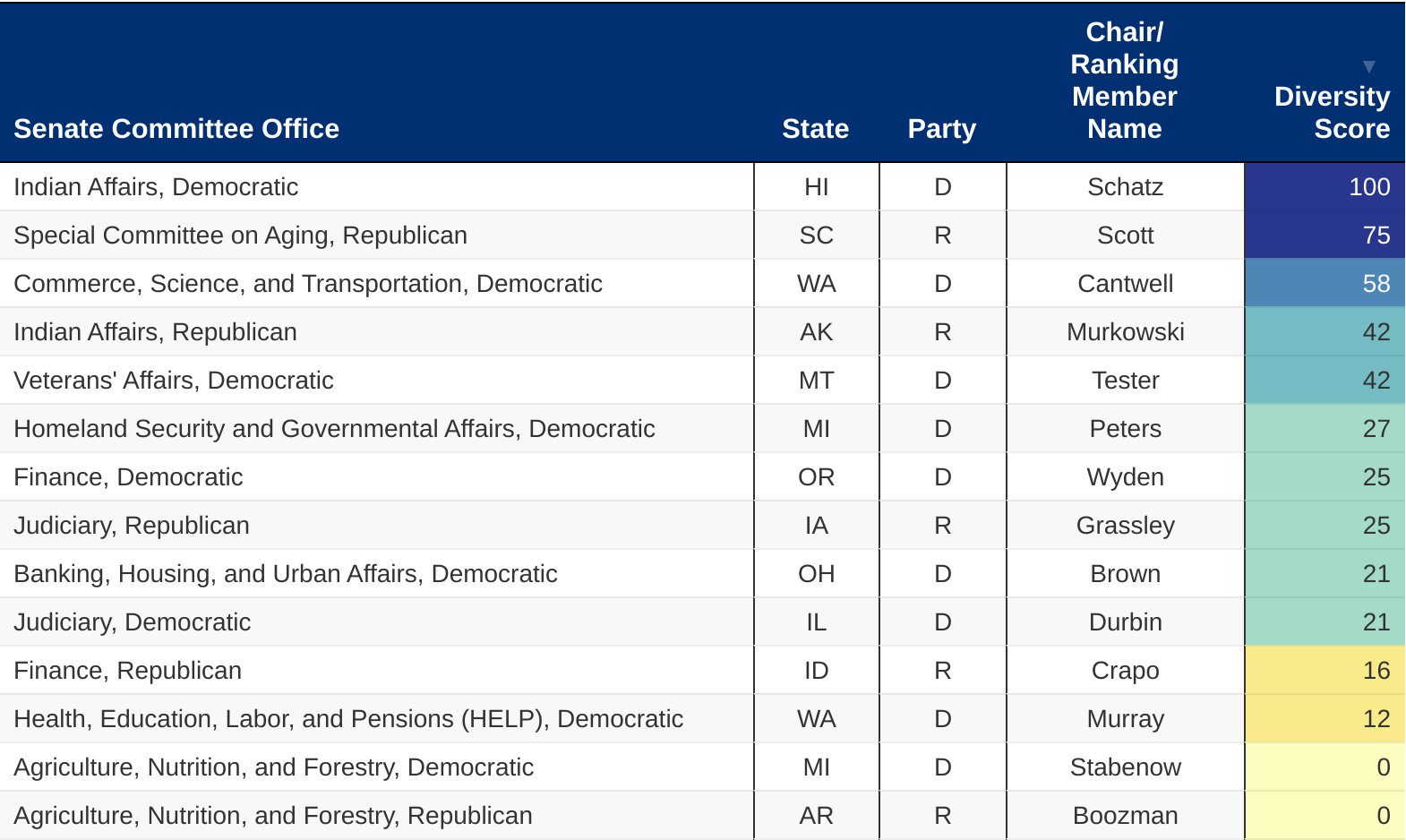 Racial diversity among Senate committee top staff: As of May 24, the Joint Center’s interactive report card shows that out of the 39 U.S. Senate full committee offices, less than 31 percent have at least one person of color among top staff (8 Democratic offices and 4 Republican offices).

Reparations for Tulsa massacre survivors: As the centennial of the 1921 Tulsa race massacre approaches, Human Rights Watch wants the city and state to honor victims with reparations and create a history center memorializing the tragic event. All three living survivors have sued the city for appropriating the massacre for economic gain, and at least one—106-year-old Lennie Benningfield-Randle—has issued a cease-and-desist letter ordering the Tulsa Race Massacre Centennial Commission to stop using her name and likeness to promote the project.

Color of Change hosts a week of racial justice action to honor the 2020 racial justice uprisings and uplift families who lost loved ones to police violence, celebrate Black joy, reimagine public safety, hold corporations accountable, and commit to a continued fight for justice.

JPMorgan Chase announces updates to their AdvancingCities Challenge that will now “source bold solutions” for long-term economic prosperity for Black and Latina women.

The National Telecommunications and Information Administration announces the Broadband Infrastructure Program which will provide federal funding for the deployment of broadband infrastructure in an eligible service area.

Upcoming events include “Resources For Your Small Business” (National Urban League, May 27); “Can Biden’s Broadband Infrastructure Plan Close the Digital Divide?” (Brookings Institution, June 2); and “Strategies for Protecting Communities of Color in the DMV Region: Defunding the Police and Exploring Other Alternatives to Policing” (Urban Institute, June 10).

A Strange Moment for the U.S. Economy (New York Times)