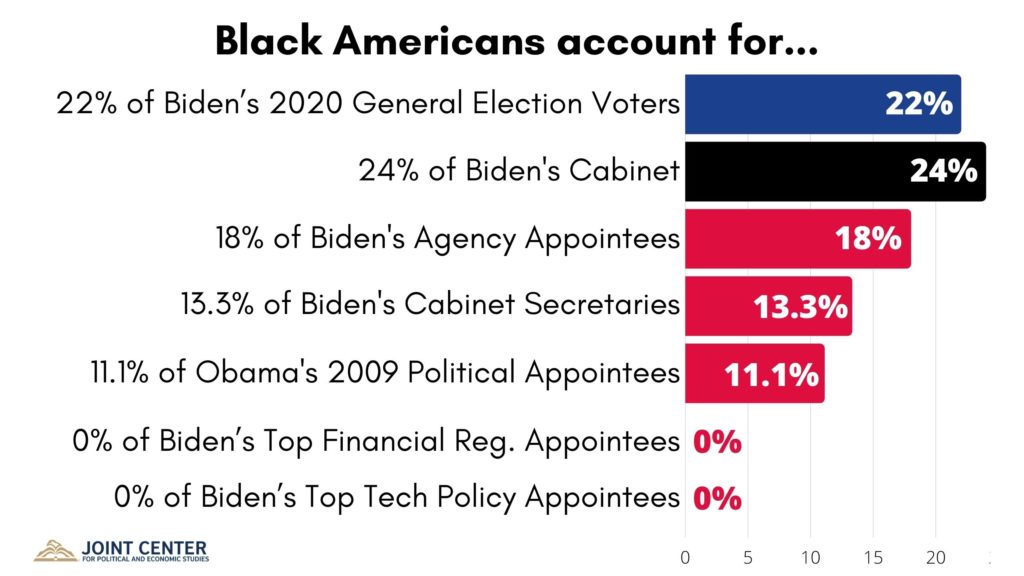 Today, the Biden Administration reported on its progress over the first 100 days, and announced that of “the approximately 1,500 agency appointees hired by President Biden so far… 18% identify as Black or African American.” It did not disclose the percentage of leadership positions held by African Americans, such as nominations for Senate-confirmed positions, or appointments to senior executive service or senior White House positions.

In response to the release, Joint Center President Spencer Overton issued the following statement:  “Too often, African Americans have been underrepresented in both Democratic and Republican administrations. We appreciate the Biden Administration’s stated commitment to ensure African Americans are fairly represented and many of their accomplishments.  However, notwithstanding these efforts, the glaring absence of Black representation in economic and tech policy top leadership positions and inadequate Black representation in critical Assistant Secretary and Senior Executive Service leadership positions are unacceptable. As evidenced by the data, there is much more work to ensure fair representation and racial equity for Black communities. We look forward to working with the President and his team to increase Black representation in his Administration.”

Numbers on Black Appointments 100 Days into the Biden Administration

According to the Biden Administration, after 100 days 18% of its agency appointees identify as Black or African American. By comparison, African Americans were 22% of the voters who cast ballots for Joe Biden in the 2020 general election, and over 54% of the Georgia voters who supported the Democratic Senate candidates in the 2021 runoff election that allowed Democrats to control the Senate and the confirmation process. 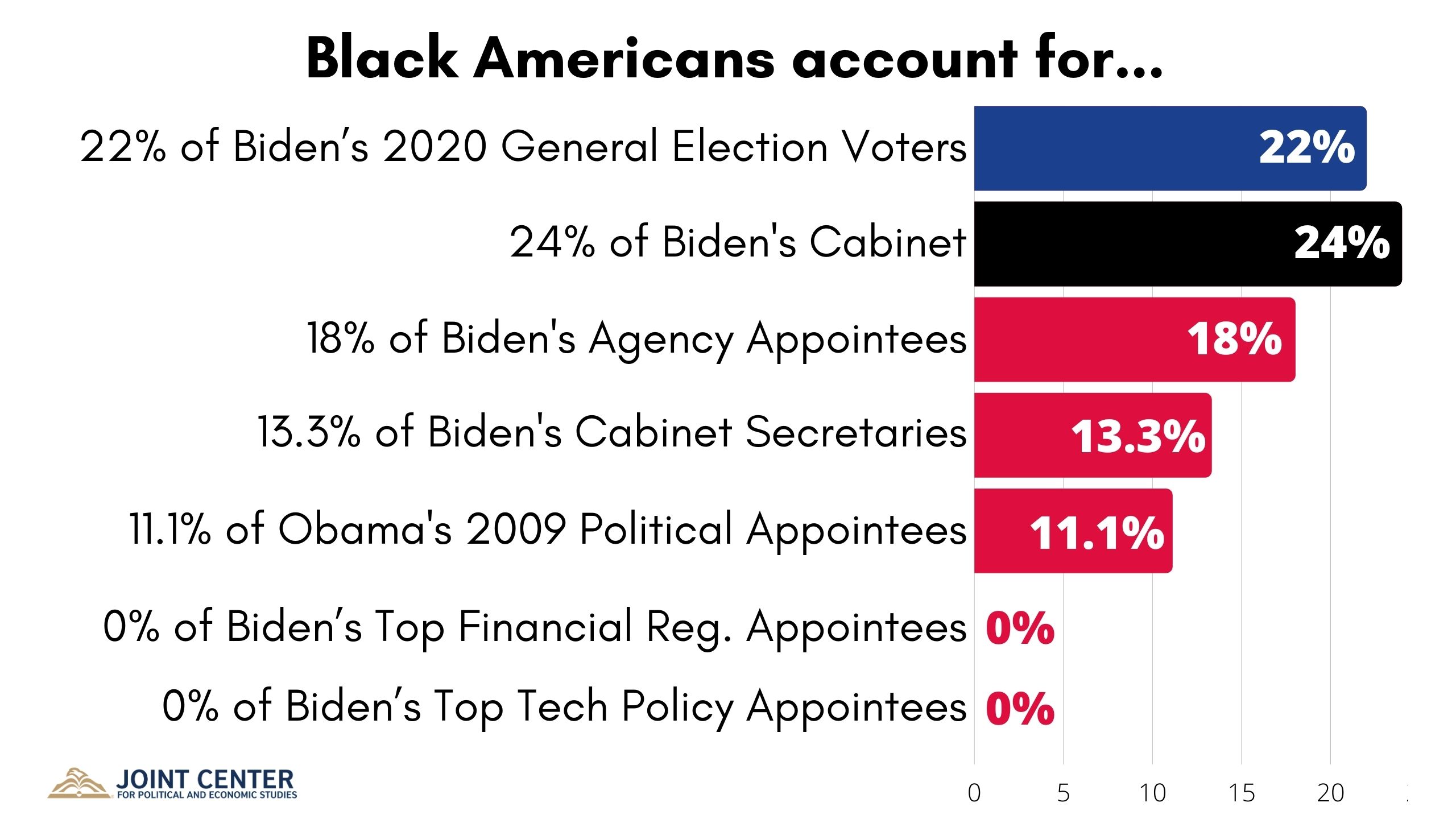 While assessing the diversity of the high-profile cabinet is relatively straightforward, the Biden Administration did not release key data that would allow an assessment of Black representation in critical subcabinet and other leadership positions at agencies and in the White House (see below). Too often, elected officials that fail to disaggregate this data obscure that their racial diversity is concentrated in support roles and that their leadership has little Black representation. For example, in June 2020 Senate Democrats reported data showing that the average Democratic Senate personal office had a staff that was 13.7% Black. In August 2020, however, the research of Dr. LaShonda Brenson of the Joint Center revealed that African Americans accounted for only 5% of Democratic Senate personal office top staffers (chiefs of staff, legislative directors, and communications directors).

Lack of Data on Black Leadership

The Biden White House has not released the percentage of its nominations and appointments to key leadership positions who are African Americans, including:

With regard to Black appointments, the Biden Administration has enjoyed several “firsts,” including:

More Black Leadership in Economic Agencies: As illustrated in the chart above, African Americans account for none of President Biden’s top financial regulator appointments, even though they historically have been underrepresented in these positions (e.g., heads of the Commodity Futures Trading Commission, the Consumer Financial Protection Bureau, the Federal Reserve, the Federal Deposit Insurance Corporation, the Office of the Comptroller of the Currency, the Federal Housing Finance Agency, the National Credit Union Administration, and the Securities and Exchange Commission).  To date, none of President Biden’s appointments to lead these agencies have been Black (CFPB, NCUA, and SEC), the current open slots are the heads of the CFTC and the OCC, and the leaders of the other agencies either have not yet concluded their terms (the Federal Reserve, FDIC) or have not yet been required to leave (FHFA).

Additionally, the Biden Administration should appoint African Americans to top economic positions at Treasury (e.g., Assistant Secretary for Financial Markets and the Assistant Secretary for Financial Institutions), Commerce (e.g., Under Secretary of Commerce for International Trade, Minority Business Development Agency Director, Economic Development Administration leadership), and the open Governor position on the Federal Reserve Board, as well as nominate Shalanda Young to serve as Director of the Office on Management and Budget (she is currently the Acting Director and has been confirmed by the Senate as Deputy). At this critical moment, Black communities have been devastated by the economic impact of the pandemic, and economic policy has too often exuded a veneer of mathematical objectivity while ignoring the persistent legacy of racial inequity woven into the fabric of the U.S. economy since its inception. These systemic failures are only exacerbated by the underrepresentation of African Americans in political leadership and among staff (e.g., this New York Times analysis found that only 0.5 percent of the Ph.D. economists on staff at Federal Reserve in Washington are Black).

More Black Leadership in Tech Positions:  The Biden Administration has emphasized dismantling systemic inequality, and Black representation in key tech policy positions is also critical to shaping an equitable future. Closing the digital divide, preventing algorithmic bias in the collection and use of data, and tackling many other challenges will shape the future of race in the United States. As illustrated by the chart above, African Americans account for none of President Biden’s top tech appointments so far (White House Office of Science and Technology Policy Director and National Cyber Director).  He should shift course and ensure strong Black representation among his nominations for the Assistant Secretary of Commerce for Communications and Information (head of the National Telecommunications and Information Administration), Federal Communications Commission Chair, Federal Trade Commission Chair, and U.S. Chief Technology Officer.

To see all of the Joint Center’s report cards examining the Biden administration’s performance on Black appointments, click here.