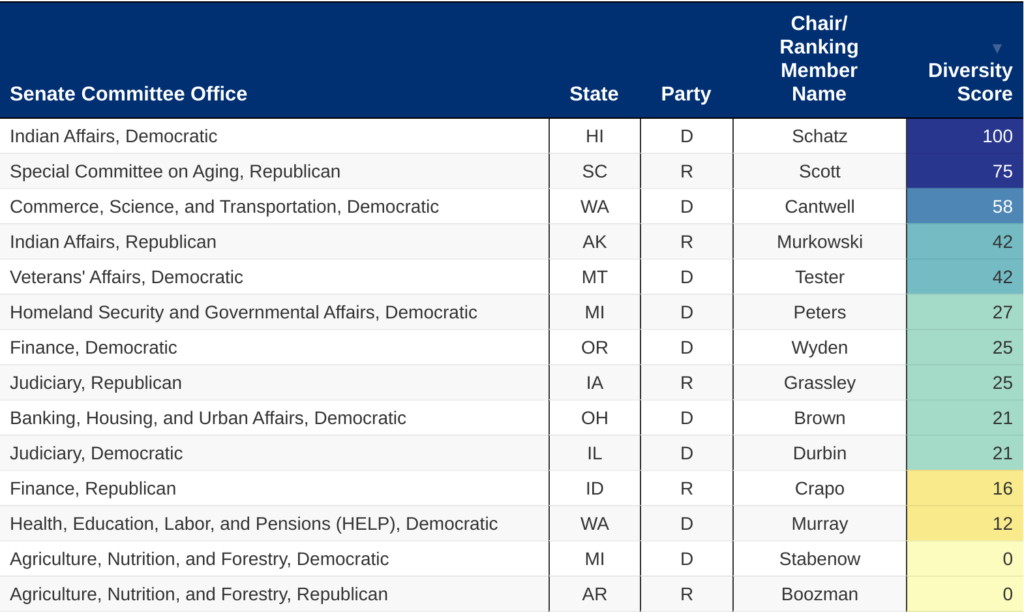 Only 30 percent of Senate committee chairs and ranking members currently employ at least one person of color among their top committee staff.

Of the 39 Senate committee chairs and ranking members, only five matched or had a higher racial diversity score than the population of people of color in the U.S. (40 percent):

See the interactive report card with an analysis of all 39 committee offices here, and the Politico coverage here. The Joint Center will update committee tracker data every two weeks.

Diversity among top staffers of U.S. Senate full committees is critical because committee top staffers play essential roles in policymaking and in managing the confirmation process for federal judges, U.S. Attorneys, cabinet secretaries, ambassadors, and other executive branch and independent agency leadership. These top committee staff think through how policies and appointments will affect various communities, and often hire, manage, promote, and dismiss other staff.

Congress has since taken essential steps to improve transparency and staff diversity. For the past four years, Senate Democrats led both chambers by releasing racial/ethnic data about the staff in Democratic Senators’ personal and committee offices. Senate Democrats, however, have not disclosed the diversity of top staff.

Senators should work together and follow the lead of the U.S. House of Representatives by establishing an Office of Diversity and Inclusion that develops a diversity plan and helps Senate offices in recruiting, hiring, training, promoting, and retaining a diverse Senate staff. Earlier this year, the Joint Center organized a letter signed by over 35 civil rights groups addressed to Senate Majority Leader Chuck Schumer (D-NY) urging his office to establish a bipartisan Senate Diversity and Inclusion Office.