The Joint Center released a report analyzing racial differences on the future of work, and examined the latest Senate Democratic Caucus demographic data on their staff. Details below! 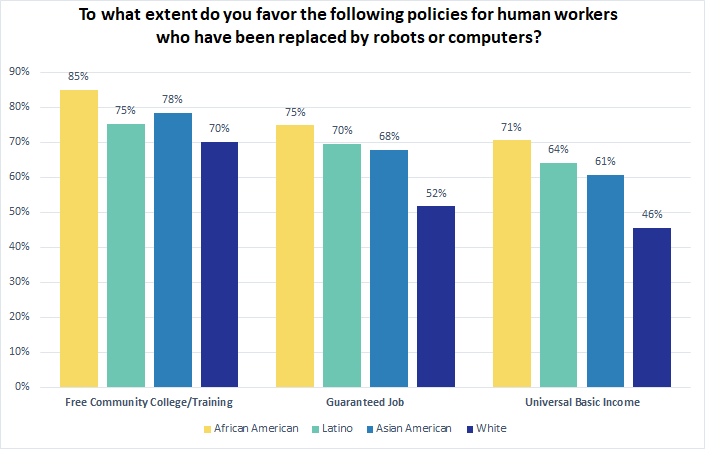 On July 24, the Joint Center released Racial Differences on the Future of Work: A Survey of the American Workforce. The report highlights the findings of a Joint Center survey of over 2,000 Black, Latino, white, and Asian Americans on their perspectives on the changing economy. Key findings include:

The report was covered in Bloomberg, Communications of the ACM, Diverse: Issues in Higher Education, EdWeek, GW Hatchet, Inside Higher Ed, Political Hispanic, and #RolandMartinUnfiltered.

Joint Center President Spencer Overton presented the Joint Center’s findings from the report during a panel at the 2019 National Urban League Annual Conference in Indianapolis, IN.

Harin attended the Center for American Progress’s Workforce Equity Conversation Series, an invite-only workshop with over 20 representatives from think tanks and foundations.

Employment Situation Report: On July 5, 2019, Harin hosted analysis on the Bureau of Labor Statistics monthly jobs report. In our latest chat, Harin conducted a solo-session due to the July 4 holiday. He shared that education plays a stronger role for African Americans’ attachment to the labor force than for whites. However, African Americans have higher unemployment rates at every educational attainment level compared to their white counterparts. 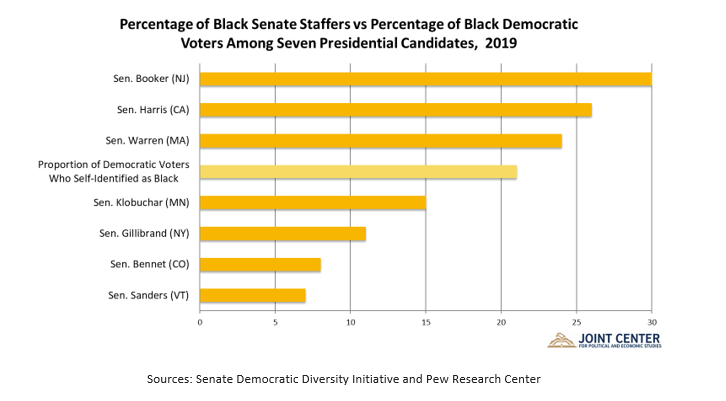 The Joint Center examined the latest Senate Democratic Caucus demographic data on their staffs. The analysis includes a series of lists ranking Senate offices in categories such as top three racially diverse personal offices, top Senators with Black staff, and Senators up by more than 5 points from 2018 in racial diversity. The Joint Center also analyzed the racial diversity of the personal offices of the 7 U.S. Senators running for the 2020 Democratic presidential nomination.

On his weekly podcast, WashingTECH Host Joe Miller spoke with The Giving Block Co-Founder Alex Wilson on whether nonprofits should accept bitcoins for donations, Premier, Inc. President Michael J. Alkire on applying data science to healthcare, Nokia Senior Director of Policy and Government Relations Lauren McCarty on the potential for 5G broadband, and Next Century Cities Executive Director Francella Ochillo on discussing 5G with cities in mind. The podcast is available on iTunes, Spotify, and on WashingTECH’s website. New episodes every Tuesday. Listen here.

McKinsey Global Institute released a report on the future of work in America including analysis on its impact on places, people, and companies. The report finds that 23.1 percent of Black workers could be displaced by 2030 (4.6 million workers). Learn more about McKinsey’s take on Black worker displacement on pages 60-64 here.

Marcus Casey and Sarah Nzau of the Brookings Institution wrote about how automation will affect the middle class.

The National Urban League Annual Conference is happening from July 24-27. At the conference, Spencer will be release new data on race and the future of work. Learn more here.

National Association of Black Women in Construction is hosting a reception on September 12. More here.