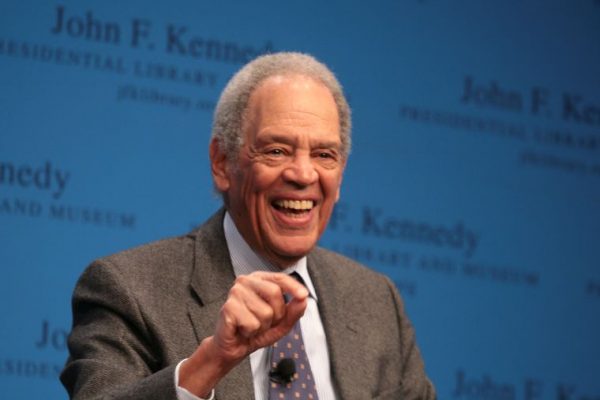 Roger W. Wilkins—civil rights leader, history professor, and award-winning journalist—passed away March 26, 2017 at the age of 85.

Spencer Overton, the President of the Joint Center for Political and Economic Studies, issued the following statement: “The Joint Center mourns the loss of Roger Wilkins. Roger played a significant role in the history of our nation, and a groundbreaking role in the history of African Americans in government and law. He worked at the Ford Foundation in 1970 when the Foundation helped establish the Joint Center. On a personal level, I have always appreciated Roger’s encouragement and support, and I have been inspired by his model of social commitment and intellectual engagement. Roger’s wife Patricia and the rest of his family are in our thoughts and prayers.”
Wilkins was born in Kansas City, Missouri, grew up in Grand Rapids, Michigan, and completed his undergraduate degree and law degree from the University of Michigan. He held a diverse array of influential positions throughout his life. Wilkins served as an intern for NAACP LDF director-counsel Thurgood Marshall, an Assistant Attorney General in Lyndon B. Johnson’s administration, a program officer at the Ford Foundation who oversaw funding for job training and education, a member of the editorial boards of the Washington Post and the New York Times, chair of the Pulitzer Prize board, a member of the D.C. school board, a publisher of the NAACP’s magazine the Crisis, and a professor at George Mason University.