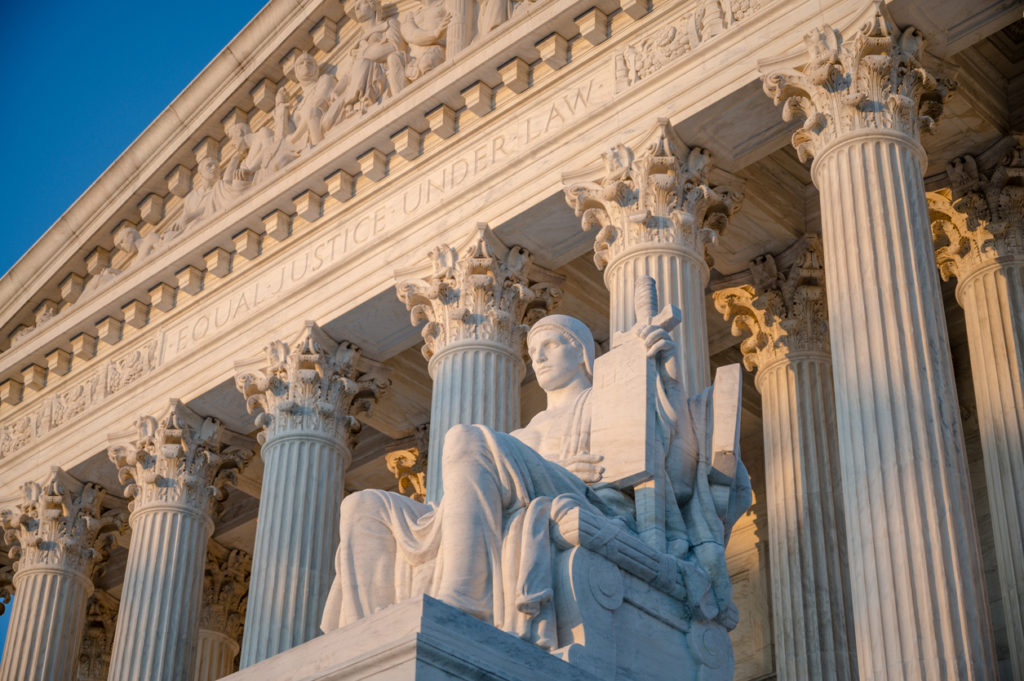 With the number of U.S. deaths from COVID-19 surpassing 200,000, Senate Majority Leader Mitch McConnell’s focus on replacing Supreme Court Justice Ruth Bader Ginsburg despite failing to pass a stimulus bill has drawn significant criticism. He has faced protests outside his Kentucky home and several Democratic lawmakers have questioned his priorities. While Democrats have insisted that Leader McConnell should comply with the precedent he set in 2016 when he refused to let the Senate consider Obama Supreme Court nominee Merrick Garland following the February 2016 death of Justice Antonin Scalia. Leader McConnell stated a Trump Supreme Court nominee will receive a vote in the Senate.

Last week—Senate Republicans dismissed calls from President Donald Trump to put forth a larger stimulus package (the White House has signaled it would be open to a $1.5 trillion stimulus package). Speaker Nancy Pelosi (D-CA), who is facing pressure to take decisive action on a bipartisan coronavirus stimulus bill, upped the ante on Republicans by announcing plans for the House to vote on an additional relief package should bipartisan agreement be reached ahead of the elections. Pelosi continues to push for a package of at least $2.2 trillion, while the GOP remains committed to a $650 billion proposal blocked by Senate Democrats.

The battle against the pandemic continues to be shaped by the often conflicting agendas of election-year politics and science-driven public health policy. In response to protests from public health officials, the Centers for Disease Control and Prevention reversed its previous guidance suggesting that it was unnecessary for asymptomatic people to be tested for the coronavirus: “If you have been in close contact, such as within 6 feet of a person with documented SARS-CoV-2 infection for at least 15 minutes, and don’t have symptoms, you need a test.”

Trump announced that a coronavirus vaccine would be manufactured and made available to all Americans by April of 2021. The forecast conflicts with CDC Director Robert Redfield’s assertion at a Senate hearing earlier in the week that a vaccine would not be available until late summer or fall of next year. 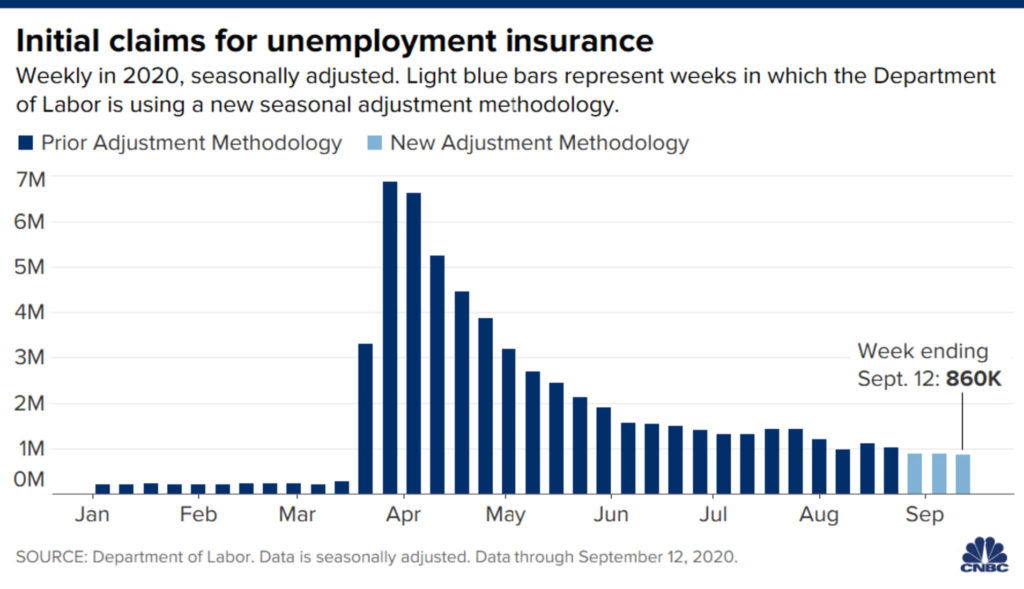 There were 860,000 initial unemployment claims filed for the week ending September 12, still significantly higher than the pre-coronavirus single week record high of 695,000 claims in 1982.

The Economic Policy Institute (EPI) points out that unemployment claims would be 1.5 million when including Pandemic Unemployment Assistance (PUA) claims, which are jobless benefits for freelancers and others who are not typically eligible for jobless benefits. Economists draw concerns over unemployment claims being overcounted for a variety of reasons, including the fact that PUA claims are counted differently by the federal government and state governments.  Unemployment filings may be a less reliable metric for the health of the economy, according to the article, and “economists usually turn to more reliable monthly and quarterly data to get a more complete picture of what is going on.”

The Center for American Progress finds that the amount of state unemployment benefits are too low to cover modest expenses for an average one-adult, one-child family anywhere in the U.S. CAP’s analysis shows that even with the $600 federal jobless benefit supplement that expired at the end of August, a gap of $387 remains between a typical monthly budget and unemployment insurance levels. 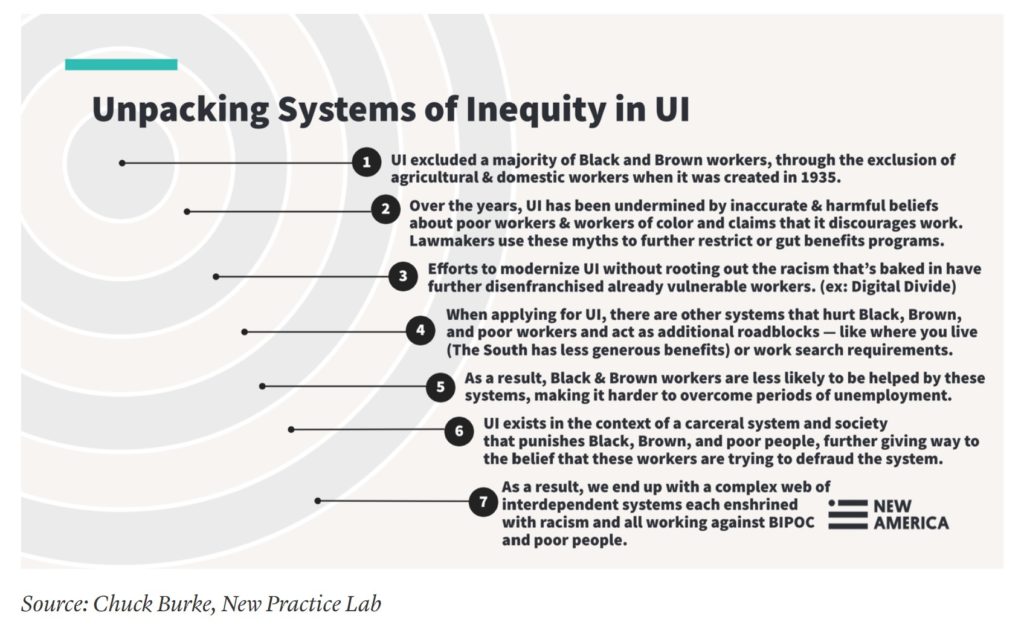 New America shows how long-standing inequities in the unemployment insurance system have disadvantaged Black and Latina/o workers during the COVID-19 pandemic. New America hopes that policymakers will use the research “to broaden the type of experts they invite to the table when creating policy.” Joint Center Vice President Jessica Fulton provided comments on the experience of essential Black and Latina/o workers for the report, noting “These workers deserve to feel safe at work, and when they can’t find work that keeps them safe, they still deserve to have the kinds of stable incomes that will allow them to plan for and afford expenses like food and rent.” 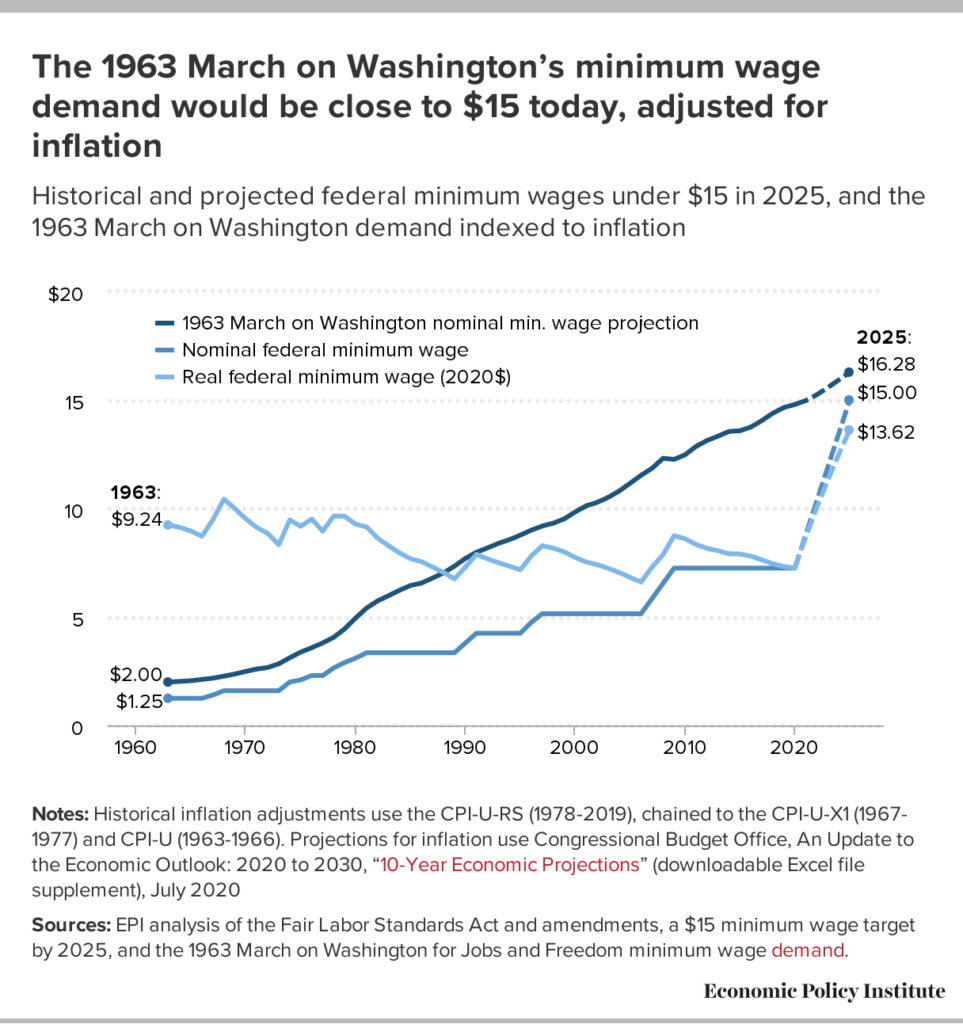 The Economic Policy Institute shows that had policymakers raised the minimum wage to $2 per hour as demanded by the March on Washington in 1963, and tied future increases to the cost of living, the minimum wage today would be $14.79/hour, more than twice it’s current value. According to economists Ellora Derenoncourt and Claire Montialoux, the minimum wage increases that did occur were responsible for over 20 percent of the decline in the Black-White income gap during the Civil Rights Era.

The narrowing of the Black-White income gap over the last four decades is more from the “flat or declining wages for low- and middle-income White men than it is of substantial gains for women and nonwhites,” Time magazine reports.

The National Women’s Law Center (NWLC) finds that “[b]etween February and April, women lost over 12.1 million jobs, completely erasing all of their job gains over the past decade.” According to NWLC calculations of U.S. Census Bureau data from July 16, 2020 to July 21, 2020, women of color were the hardest hit by the coronavirus: 54.5% of Black women; 56.3% of Asian women, and 63.7% of Latinas reported a loss of income since March, compared to 46% of White women. Also, 21.5% of Black women and 21.1% of Latinas reported not having enough food to eat, compared to 8.5% of White women and 7.7% of Asian women.

The Center on Budget and Policy Priorities analyzes Census Bureau data from 2018 to 2019 and identifies that before the pandemic, “Black and Hispanic individuals were more than twice as likely to be poor as (compared to) non-Hispanic whites: 18.8% and 15.7%, respectively, versus 7.3 percent.”

In identifying 10 facts about COVID-19 and the U.S. economy, The Hamilton Project finds that “[i]nequities in infectious disease outcomes are the byproduct of decades of government policies that have systematically disadvantaged Black, Hispanic, and Native American communities.” For example, Black and Latino communities in high-density, urban locations were most affected at the onset of the pandemic because of policies that determine the location and residential quality for people of color.

The Federal Reserve Board finds that as of July 2020, “27% of Black workers said that their employer was not taking enough precautions to prevent the spread of COVID-19, while 23% of Hispanic workers and 16% of White workers responded similarly.” The report also finds that 28% of Black workers worked entirely from home over the week before the survey, compared to 22% of Hispanic workers and 33% of White workers. 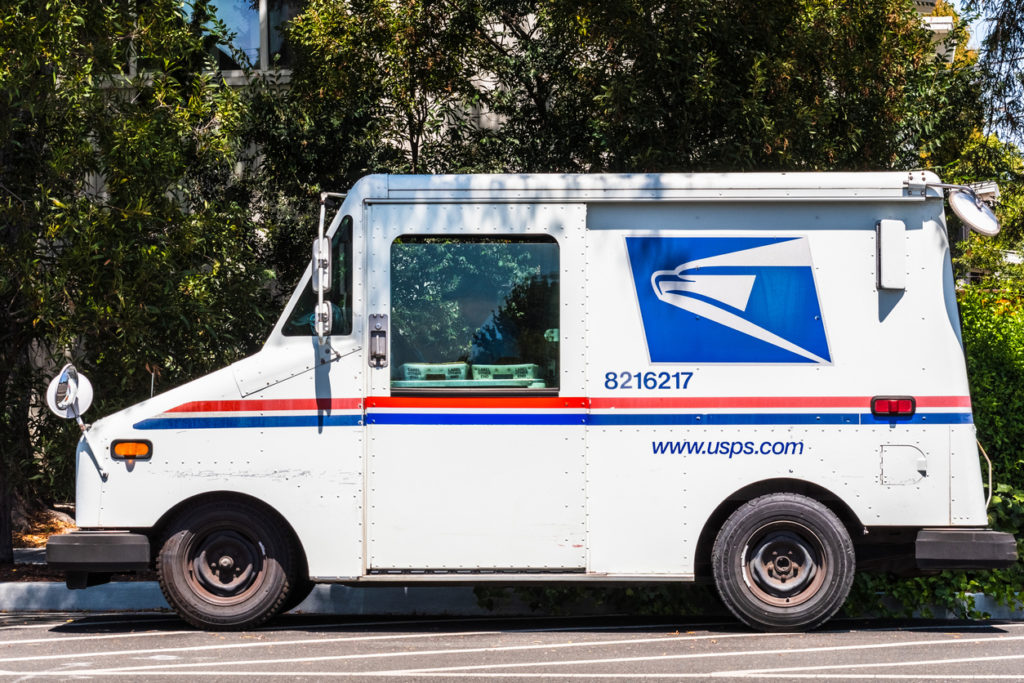 U.S. Postal workers affected by the COVID-19 virus could pose a threat to mail-in voting. ProPublica reports that over 52,000 of the agency’s 630,000 employees have taken time off during the pandemic to quarantine, care for their family members, or because they were sick. The Postal Service, whose workforce is 23 percent Black, does not conduct temperature checks, employee testing, or contact tracing according to the article.

The NAACP and the American Federation of State, County and Municipal Employees (AFSCME) are partnering on a joint radio ad buy targeting the disproportionately negative impact of President Trump’s coronavirus response on communities of color. The Hill reports that the ads will run on Black radio stations in swing states including Michigan, North Carolina, Pennsylvania, and Wisconsin.

Advocacy groups partner with jails across the country in the “Vote By Mail in Jail” initiative to register people who are in jail but have not been convicted of a felony to vote in the upcoming presidential election. Time reports that “jail populations are disproportionately Black, Latino, and Native American, and disproportionately homeless and low income.”

BET, National Urban League, and more than 40 partners held National Black Voter Day on Friday to encourage African Americans to register to vote. In a statement, National Urban League President and CEO Marc H. Morial said “in the current climate of uncertainty and unrest, it’s important to make a plan for voting — particularly for Black voters. Efforts to suppress the Black vote are coming from all sides, whether it’s restrictive state voting laws or foreign-based misinformation campaigns. National Black Voter Day is an opportunity to rise above the confusion and plot out a clear path to the ballot box.”

According to a report by Healthpayer Intelligence, racial disparities in health care coverage will be further exacerbated because 2  million Black people and 3  million Latinas/os could lose employer-sponsored health insurance by the end of 2020.

The CDC reports that Black, Latina/o,  and Indigenous children comprise more than 75% of pediatric deaths caused by contracting the COVID-19 virus, even though these children only make up 40% of the U.S. population. Of the children and teens killed, 29 percent were Black. According to the Washington Post, a key factor could be underlying health disparities among children and adolescents of color. About 75% of those who died had at least one underlying condition, and the most frequent were asthma and obesity, which are conditions that disproportionately occur in youth of color.

In Smithsonian Magazine, scholars explain how systemic racism is the primary driver of high COVID-19 infection and death rates in Black communities and other communities of color.

Concerns are brewing over cases pending before the U.S. International Trade Commission (ITC) to block the import of mobile devices, which could compound the existing digital divide during the COVID-19 pandemic in Black communities. p to 42 million people in the United States may lack access to broadband–a disproportionately high share of which are people of color. ithout mobile devices that access the internet, the digital divide excarberates and communities of color are at a significant disadvantage.

Inside Higher Ed reports that a survey of about 45,000 undergraduate, graduate, and professional students by the Student Experience in the Research University Consortium reveals that students of color and those from economically disadvantaged backgrounds are more likely to experience hardships, including lost wages and unexpected living expenses, than their White peers as a result of the coronavirus pandemic.

The coronavirus crisis has triggered a wave of students dropping out of college, with especially steep drops in Black enrollment. The Washington Post reports that “fall enrollment at Miami Dade College is down 17.5 percent so far, with a 16 percent decline among Hispanic students and a 20 percent decline among Black students. Northern Virginia Community College and the City University of New York are down about 4 percent each this fall, with early data indicating a steep decline for Black students at NOVA.”

Color of Change issues a petition to Facebook urging the immediate end to hate group recruitment. 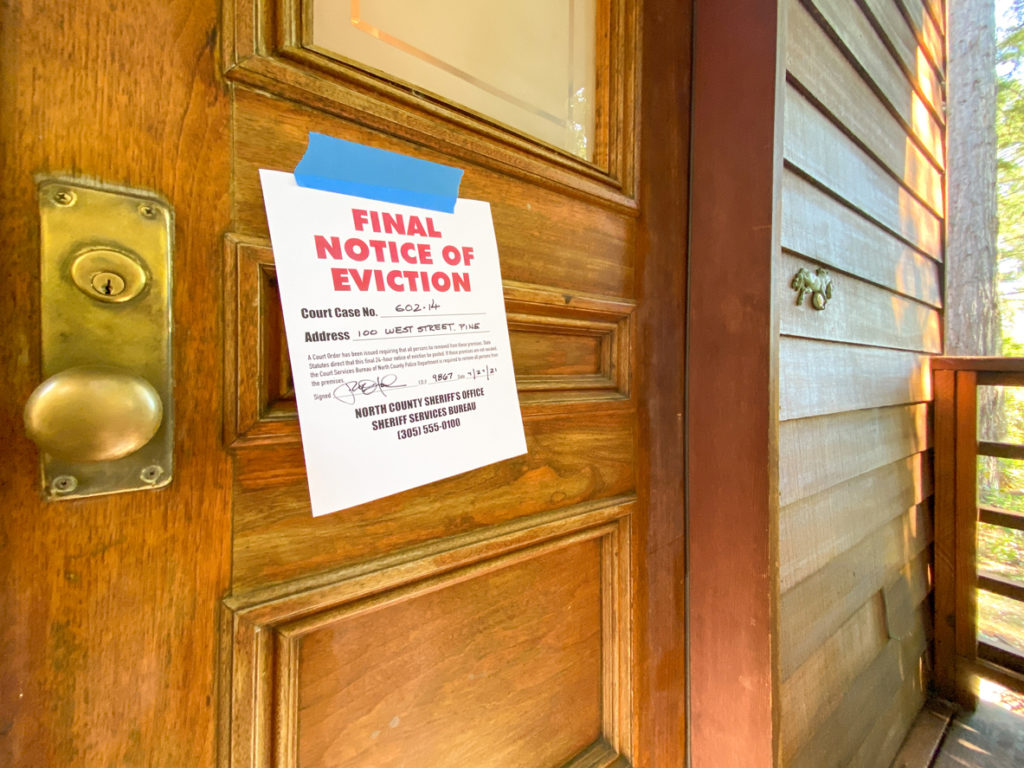 Lyft announces Voting Access plans for the November election which include discounted and free rides to polling locations on Election Day and a partnership with the NAACP, National Action Network, Black Women’s Roundtable, National Urban League, and several other organizations to help “distribute free and discounted rides in communities where access to reliable, affordable transportation is limited.”

The Bay State Banner hosts an event with experts to discuss resources and solutions to build back Black wealth during COVID-19. Panelists include Congresswoman Ayanna Pressley (D-MA), who explains how the Payment Protection Program left small Black businesses owners at a disadvantage.