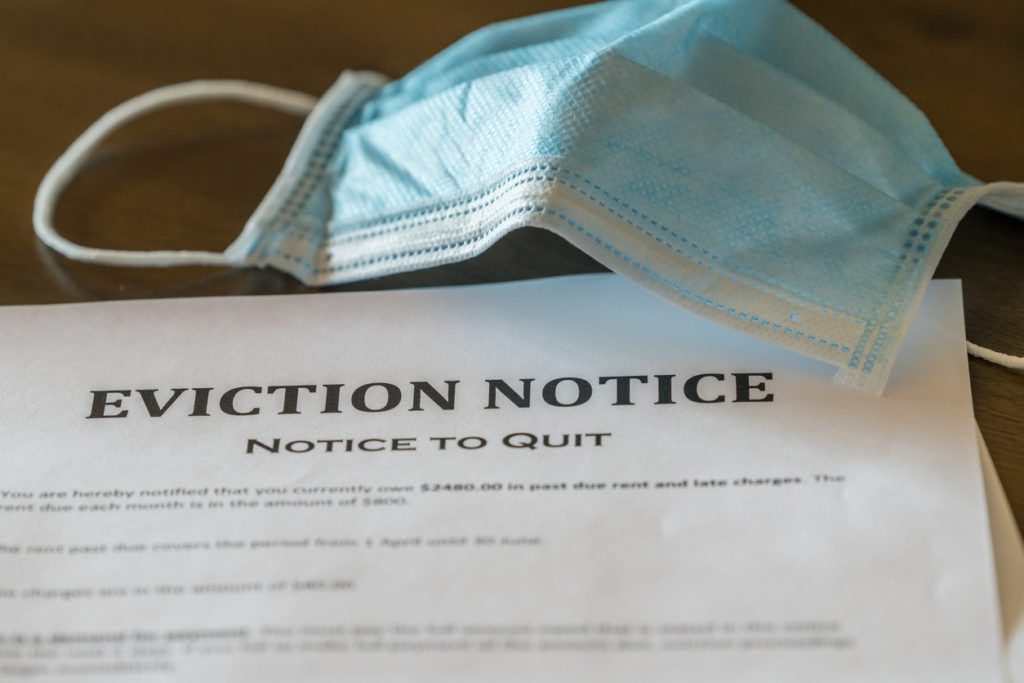 Last week, in the wake of the July expiration of both the $600 federal unemployment benefit and a federal eviction moratorium and following an executive order from the White House, the Centers for Disease Control (CDC) issued a four-month moratorium on evictions to prevent the displacement of 43 million residential renters. A coalition of housing industry groups—including realtors, builders and mortgage bankers—charged the Trump Administration with endangering “the stability of the entire housing sector” by issuing the moratorium without funding rental assistance for landlords. Speaker Nancy Pelosi (D-CA) also criticized the extension of the rent moratorium stating, “it’ll get pushed further down the road, unless we get some money for them to compensate for what they have to get. And that’s not just for the renters, that’s for the landlords.”

While the Senate is back in session this week and the House comes back next week, Democrats and Republicans remain far apart on a coronavirus relief package. The Democrats’ recent $2.2 trillion offer—which is much lower than the initial $3.4 trillion HEROES Act House Democrats passed in May—has been rejected by U.S. Treasury Secretary Steven Mnuchin. On Tuesday, Senate Majority Leader Mitch McConnell announced the Senate would vote on a narrower coronavirus relief bill this week. The bill is not expected to advance due to Democratic opposition and Republican internal differences

At the same time that Congress is grappling with a coronavirus spending bill, it faces a September 30 deadline when agency funding will expire and the federal government will start to shut down. Speaker Pelosi (D-CA) and Treasury Secretary Mnuchin reached a tentative agreement to a short-term spending bill in order to avert a government shutdown. 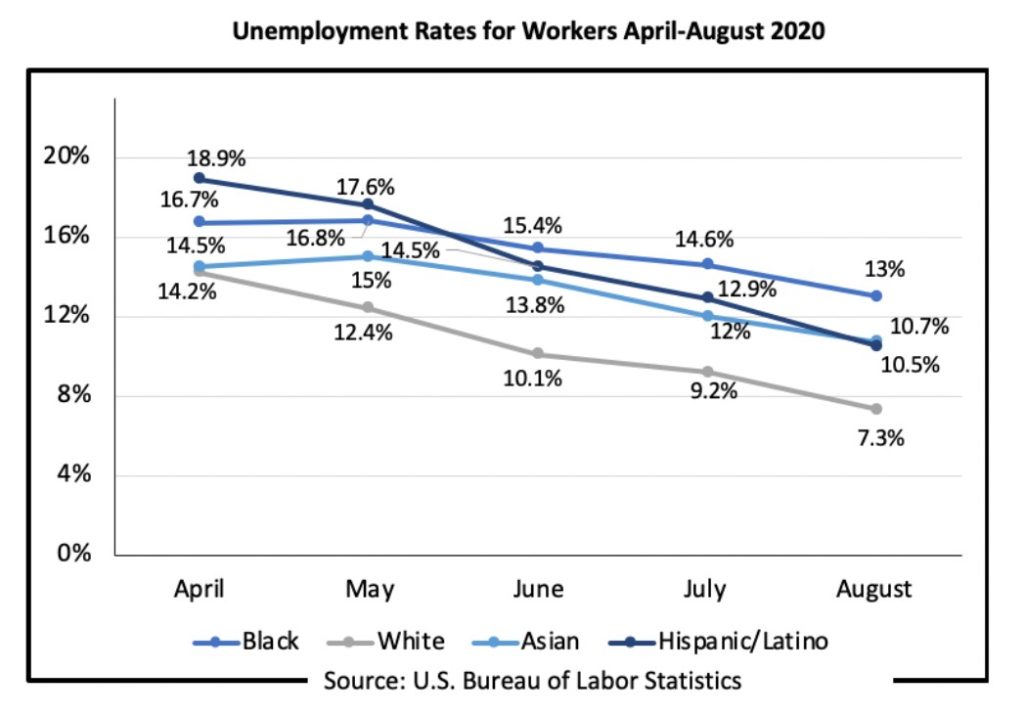 There were 881,000 new unemployment claims for the week ending August 29. This decrease from the prior week partially reflects a revision to the Department of Labor’s seasonal adjustment methodology, which is intended to account for patterns in unemployment filings from year to year. Prior to the coronavirus, the single-week record high was 695,000 claims in 1982.

In the second quarter of 2020, African American unemployment rates rose by at least 10 percentage points above pre-pandemic levels in 11—Alabama, California, Florida, Illinois, Michigan, New Jersey, New York, Ohio, Pennsylvania, South Carolina, and Texas,—of the 22 states (including the District of Columbia) where data is available according to analysis by the Economic Policy Institute.

Third Way proposes an Emergency Payroll Subsidy program that would provide federal subsidies for worker salaries in the event of future economic disasters similar to COVID-19 and the Great Recession.

In light of Labor Day, Center for American Progress advocates for better protections and compensation for the more than two million home care workers who are “disproportionately made up of Black women and other women of color.”

The Washington Post writes about the important role of Black press in providing accurate public health information to Black communities. 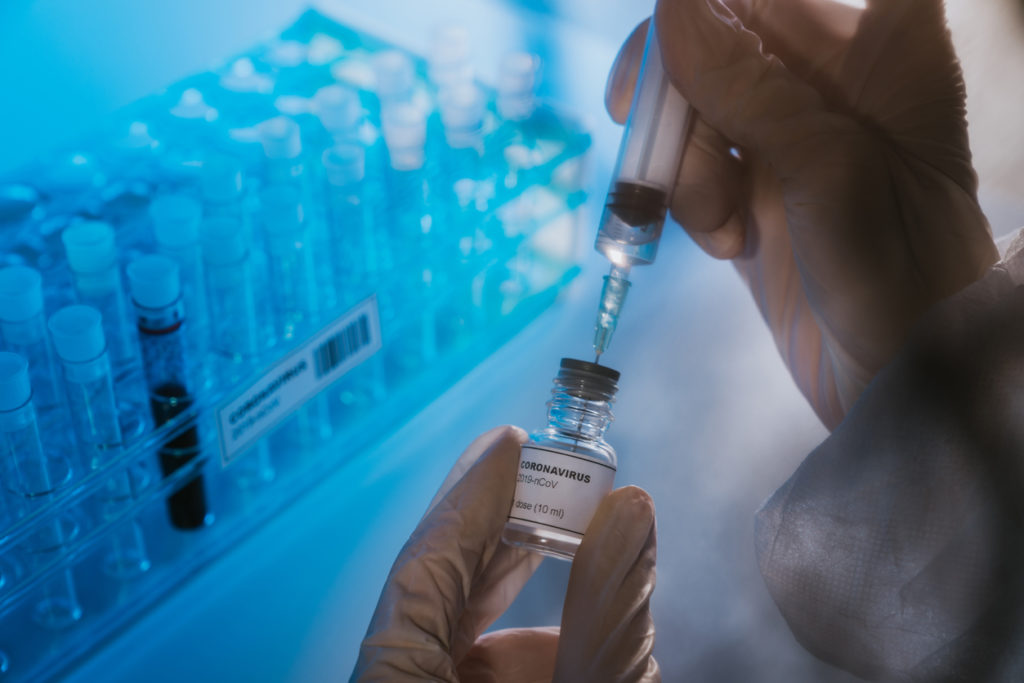 Congresswoman Karen Bass (D-CA) pens an op-ed in The Washington Post arguing that “National Institutes of Health and the companies working on stage-three vaccine trials must urgently recruit Black, Latino, Native American and Asian Pacific Islander participants, using strategies endorsed and supported by the communities they are targeting.”

The Centers for Disease Control and Prevention (CDC) issues a notice to all 50 states to prepare to administer a coronavirus vaccine by late October or early November, sparking speculations of President Trump acting prematurely.

ProPublica interviews families of two dozen elderly Black patients who died of COVID-19 and reports that a Louisiana hospital “discharged them, in many cases sending them home to die with hospice care.” ProPublica cites CDC data showing that “coronavirus patients aged 85 and older died at home only 4% of the time,” while “local coroner records show that in New Orleans, it was 17%.” A Kaiser Health News analysis of CDC data finds that “African Americans ages 65 to 74 died of COVID-19 five times as often as whites. In the 75-to-84 group, the death rate for Blacks was 3.5 times greater. Among those 85 and older, Blacks died twice as often.”

The New York Times explores the unique vulnerabilities that have caused children of color to become more ill or die of COVID-19 than white children. According to their analysis of CDC data, of the 180,000 deaths in the U.S., children make up close to 100 deaths (41 Latino children; 24 Black children; 19 white children; 3 Asian children; 3 American Indian children, and 2 multicultural children).

In a Vox article evaluating the impact of stress during the coronavirus pandemic, Black Women’s Health Imperative President and CEO Goler Blount says their analysis found that “in the next three years, every Black person in the US will lose someone they know to Covid-19 or its long-term consequences.”

Homeless populations are vulnerable to both contracting and spreading the coronavirus. 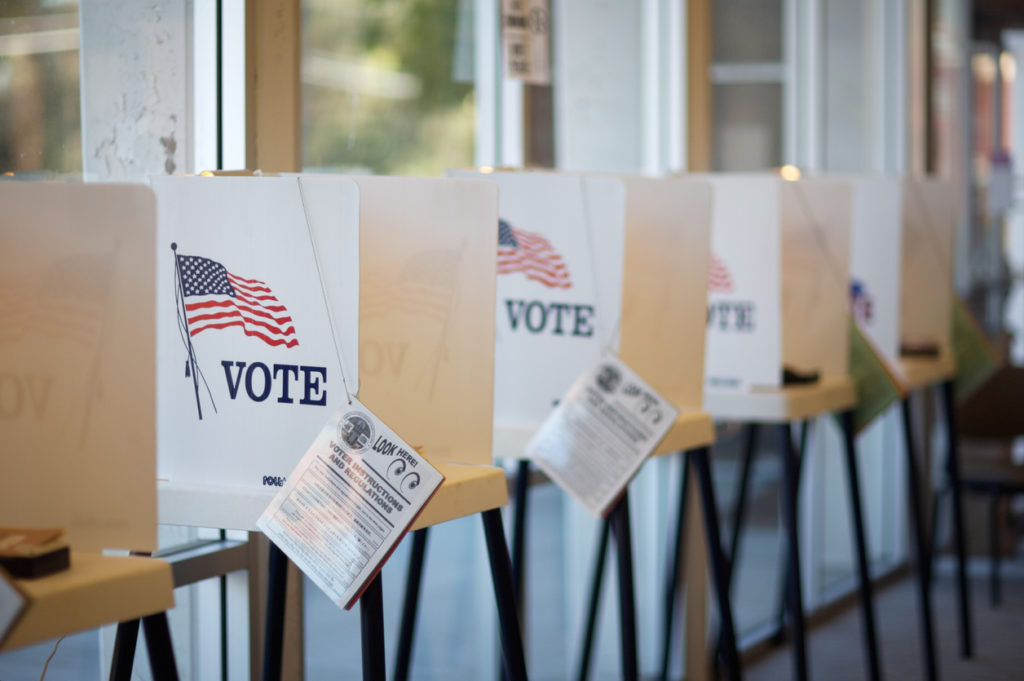 In the Washington Post, Christopher Ingraham analyzes how the electoral college, the Senate, gerrymandering, voter suppression, and big money in politics all contribute to voter inequalities among Black and other nonwhite communities. Ingraham references studies that found some of these factors give white voters more power than Black voters.

Noting that operatives have been criminally prosecuted after attempting to suppress the Black vote in previous elections, the Brennan Center for Justice releases proactive recommendations that can be taken by local officials, internet companies, and Congress to reduce digital voter suppression prior to the November election.

Facebook promises to take a number of actions to prevent voter suppression and misinformation in the upcoming election including, prohibiting new political ads the week before the election, removing posts that claim that voters will get COVID-19, and attaching a label to posts that challenge the legitimacy of voting methods or the outcome of the election. Color of Change President Rashad Robinson responds, stating “Facebook’s new election policy is a step in the right direction. But political ads are not the only problem. Facebook AND Congress must address misinformation shared in posts (including the president’s), fire policy chief Joel Kaplan & limit Zuckerberg’s power over our democracy.”

In their analysis of Cuyahoga County, Ohio, Demos found that predominantly Black communities had lower absentee ballot requests and turnout than white communities in the 2020 primary election. White neighborhoods had a 30% absentee ballot request rate and a 28% turnout rate in the 2020 primary compared to Black neighborhoods that only had a 15% request rate and a 14% turnout rate.  The Joint Center’s report on this issue highlights datasets showing that in most states Black people are not less likely to vote-by-mail, but are about twice as likely as white people to have their vote-by-mail ballots rejected by election officials (see note 6).

New data from a Human Rights Campaign LGBTQ Voting Experience Survey provides shows that LGBTQ adults of color are more likely to fear or experience discrimination in voting and face issues in meeting voter ID requirements than other LGBTQ adults. 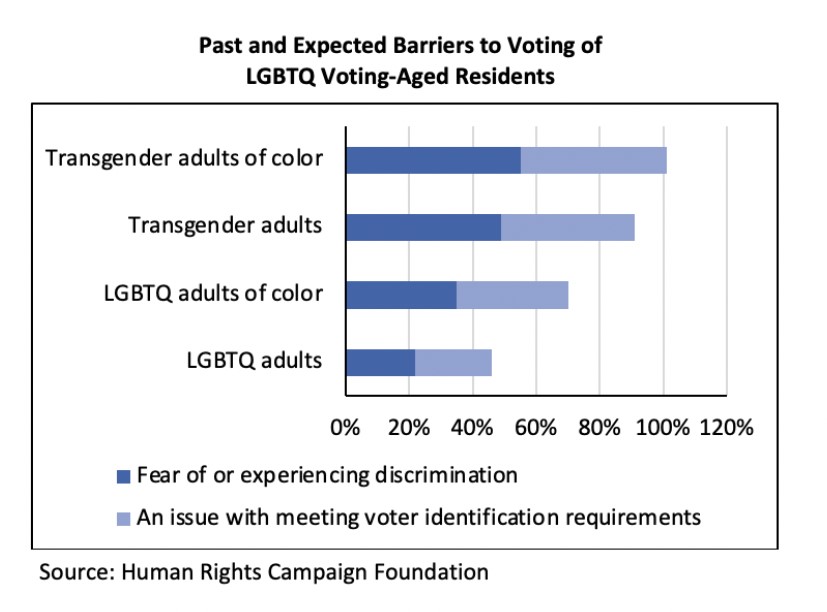 The New Yorker takes an in-depth look at how the state of Florida has historically implemented laws to prohibit felons from voting in order to stifle the Black vote. There is an ongoing litigation over a ban that once “disenfranchised one out of every five Black adults in the state,” which is slated for resolution only a month before the presidential election.

The NBA’s Orlando Magic will open the Amway Center as an early voting location starting in October for all registered voters in Orange County, Florida. The NBA Foundation has also committed $300 million over the next 10 years toward economic empowerment in the Black community.

In honor of former Congressman John Lewis, the Lawyers’ Committee for Civil Rights Under Law is offering up to $2,000 to HBCU student leaders who plan events to increase voter participation in the November election.

Scrutiny over the U.S. Postal Service intensifies as records reveal that Postmaster General Louis DeJoy has at least a $30 million stake in XPO Logistics, which has received more than $33 million annually from the Postal Service since 2014. Meanwhile, the NAACP LDF files an injunction motion against the Postal Service to suspend service changes that were proposed by DeJoy that may negatively impact mail-in voting operations for the November election.

The Lawyers’ Committee for Civil Rights Under Law releases their 2020 Public Policy Platform report that “advocates for the effective advancement of civil rights law at the state and federal level.”

New America urges Congress to allocate funding to colleges in the next stimulus bill based on total headcount, not just full-time enrollment, as to better serve Minority Student Institutions (MSIs), which include Historically Black Colleges and Universities, Tribal Colleges and Universities, Hispanic Serving Institutions, Asian American and Native American Pacific Islander-Serving Institutions, and Predominantly Black Institutions, among others. Basing the next stimulus bill on the total headcount would include part-time student MSI students who are enrolled part-time due to financial hardships, jobs, or familial responsibilities, and may have chosen to attend an MSI because it is more financially accessible than other institutions.

Causa Justa Just Cause (CJJC) announces the “Rooted and Ready: Eviction Defense for the Renter Nation Training Series to “review the basics of the eviction process and share helpful tips you can add to your toolkits to stop evictions.”

The Advancement Project sends a letter to school districts, councilmembers, congresspeople, and other stakeholders in opposition of the physical reopening of schools amid COVID-19.

The Georgia NAACP Youth and College Division publishes a letter sent to Governor Brian Kemp expressing concern over the conditions of the Georgia Education system, relief during the school year, and equitable education access.

New York University Associate Professor of Sociology of Education Dr. L’Heureux Lewis-McCoy and the NYU Metro Center’s From Integration to Anti-Racism Project host a webinar, “Equity, Pandemic & Pods” on “the challenges related to schooling in NYC in the midst of a global pandemic.”

Census Counts (The Leadership Conference on Civil and Human Rights)