President Trump contracting the coronavirus has increased the demand for a new round of COVID-19 stimulus. A $2.2 trillion updated relief bill was passed by the House on Thursday, but was viewed as unlikely to be considered by Senate Republicans, who continue to take exception to a price tag above $2 trillion and funding for state and local governments, among other issues. House Speaker Nancy Pelosi (D-CA) and Treasury Secretary Steve Mnuchin met on Wednesday, but failed to reach a bipartisan deal. 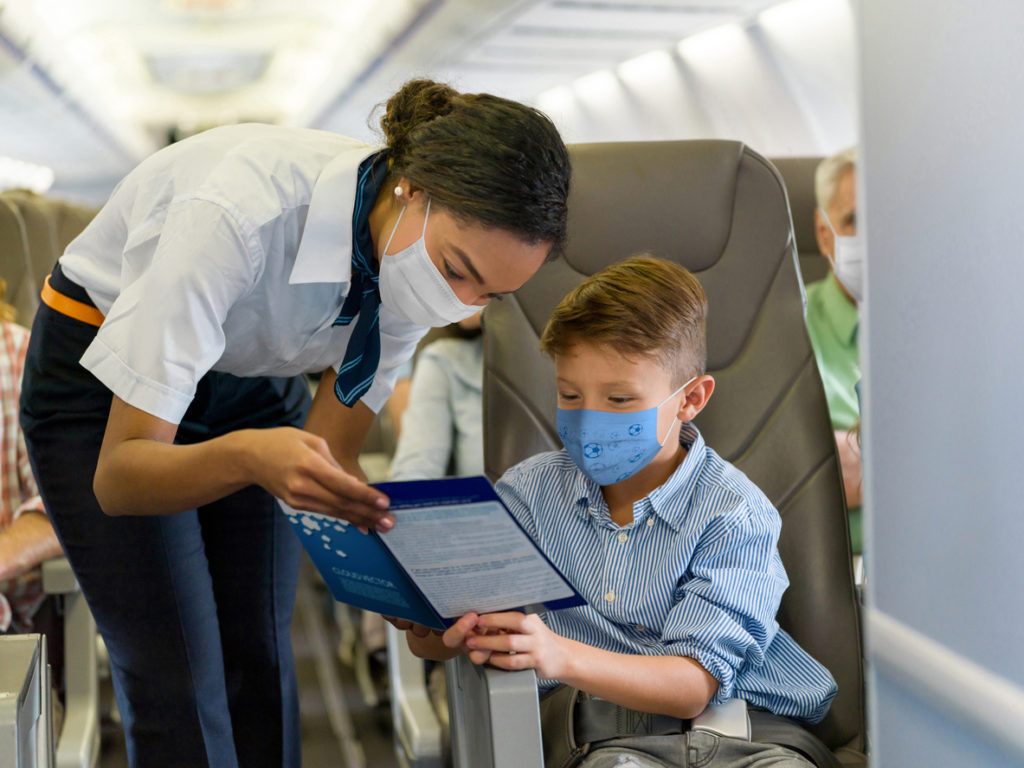 On Friday Speaker Pelosi promised that Congress will enact airline aid as a part of a larger relief bill or separately (17.5% of flight attendants in the U.S. are Black). Negotiations have been complicated by the fact that three Republican Senators have said they are in quarantine, which could narrow the 53-Member Republican majority because Senate rules mandate that Members be in Washington, DC to vote.

President Trump is sending mixed messages on whether he supports the next coronavirus stimulus relief. Yesterday, Speaker Pelosi’s Deputy Chief of Staff Drew Hammill tweeted that “the President walked away from COVID talks.” President Trump also tweeted that he “instructed my representatives to stop negotiating until after the election.” However, President Trump later tweeted a call for the U.S. House and Senate to “IMMEDIATELY” approve $25 billion for “airline payroll support” and $135 billion for the Paycheck Protection Program, and that he would “IMMEDIATELY” sign a stand alone bill for $1,200 individual stimulus checks. A government shutdown during the pandemic just weeks before the elections was avoided after a brief lapse in U.S. spending authority, when Congress passed and President Trump approved a temporary spending bill to keep federal agencies running through December 11.

Shortcomings in Deployment of COVID-19 Tests

President Trump plans to deploy 150 million COVID-19 rapid tests. One-third of these tests were designated by the White House for “the most vulnerable communities,” including nursing homes and Historically Black Colleges and Universities. According to some state leaders, the deployment of new COVID-19 tests to vulnerable populations was beset by poor execution and lack of federal planning.

Black workers experienced a stubbornly high unemployment rate of 12.1% in September, compared to 10.3% for Latina/o workers, 8.9% for Asian American workers, and 7% for White workers. The overall monthly unemployment rate for September was 7.9%, down from 8.4% in August in part because many people stopped looking for jobs and were no longer counted as unemployed. According to a National Women’s Law Center analysis, more than 1 million workers dropped out of the labor force between August and September, including 865,000 women—58,000 of whom are Black. 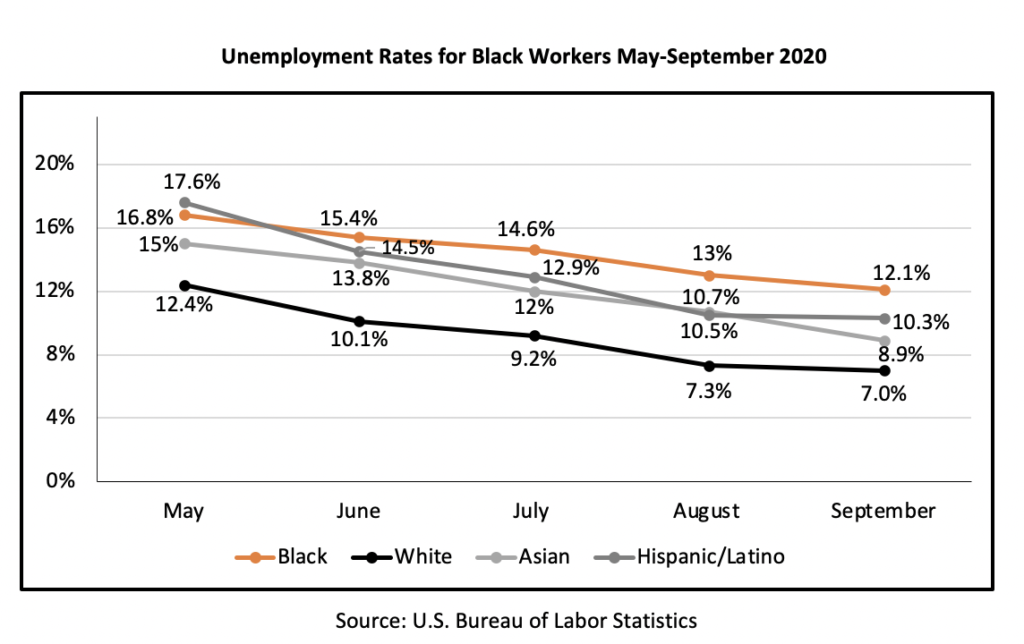 Weekly unemployment claims totaled 837,000 for the week ending September 26, remaining significantly higher than the pre-coronavirus record high in 1982 of 695,000 claims filed in a single week.

The Economic Policy Institute (EPI) estimates the total weekly unemployment numbers to be 1.5 million when including the 650,000 “gig” workers or freelance workers who would ordinarily not qualify for jobless benefits, and are not included in the regular unemployment claims reports.  With unemployment insurance (UI)  recipients scarcely getting by on state unemployment benefits,, EPI makes the case for reinstating the $600 federal supplement to jobless benefits, stating that “[f]ailing to renew the extra $600 is also exacerbating racial inequality. Due to the impact of historic and current systemic racism, Black and brown communities have seen more job loss in this recession, and have less wealth to fall back on.”

RAND Corporation Associate Economist Jhacova Williams analyzes the racial disparities between Black and white workers who were temporarily laid off and then either hired back on or permanently laid off as a result of COVID-19. She finds that a higher percentage of Black workers than White workers reported permanent layoffs. In comparing the outcomes to previous recessions, Williams says “getting back into a job later rather than sooner could do lasting harm to millions of Black Americans’ incomes and wealth accumulation for years to come.”

Noting that Black and Latina/o workers are overrepresented in job losses, the Center on Budget and Policy Priorities President Robert Greenstein issued a statement of support for the House’s $2.2 trillion package, which would reinstate the federal supplemental unemployment benefits until the end of January, provide financial support to states and localities, and boost Medicaid funding, among other supports. 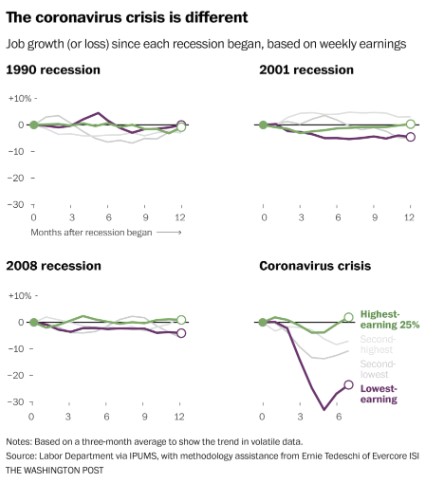 Since the beginning of the pandemic, “the nation overall has regained nearly half of the lost jobs,” but Black women have only regained 34 percent of lost jobs through August. Washington Post takes an in-depth look at the slow recovery of several demographic groups, including Black men, Black women, and mothers of school-age children.

Despite the CDC’s moratorium on evictions, a CNN analysis of data from The Eviction Lab shows that evictions remain high around the country, especially in areas with the highest rates of COVID-19 risk factors. These areas are also disproportionately Black and Latina/o communities.

Regional organizations, such as the Oakland African-American Chamber of Commerce (OAACC), are raising funds from corporations to help small Black-owned businesses that are struggling as a result of the COVID-19 pandemic. OAACC has reportedly raised more than $1 million from more than 200 companies so far. 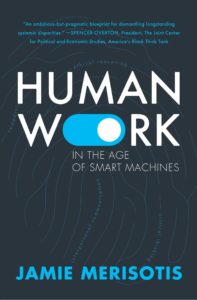 The spread of COVID-19 has resulted in massive displacement and accelerated the workplace transition to automation. Many jobs will not return, and even when the economy recovers it will be fundamentally different. To eliminate the disparities that COVID-19 highlighted, we need to focus on building structures that equitably provide people from all communities support and pathways into the work of the future.

Lumina Foundation President and CEO Jamie Merisotis’s latest book, Human Work in the Age of Smart Machines, delves into this important issue.  Joint Center President Spencer Overton has read the book, and offers this assessment:  “Jamie Merisotis takes concepts too often used to justify exclusion–credentials, skills, and technology—and repurposes them to provide an ambitious but pragmatic blueprint for dismantling long-standing systemic disparities. HUMAN WORK IN THE AGE OF SMART MACHINES recognizes the true ends are not greater efficiencies and revenues, but greater equity and economic mobility. This book is required reading for anyone committed to the future success of our increasingly diverse nation.”

Former Vice President Joe Biden pointed out at the presidential debate that 1 in 1,000 African Americans have died from COVID-19 and that 1 in 500 may die if President Trump “doesn’t do something quickly.” 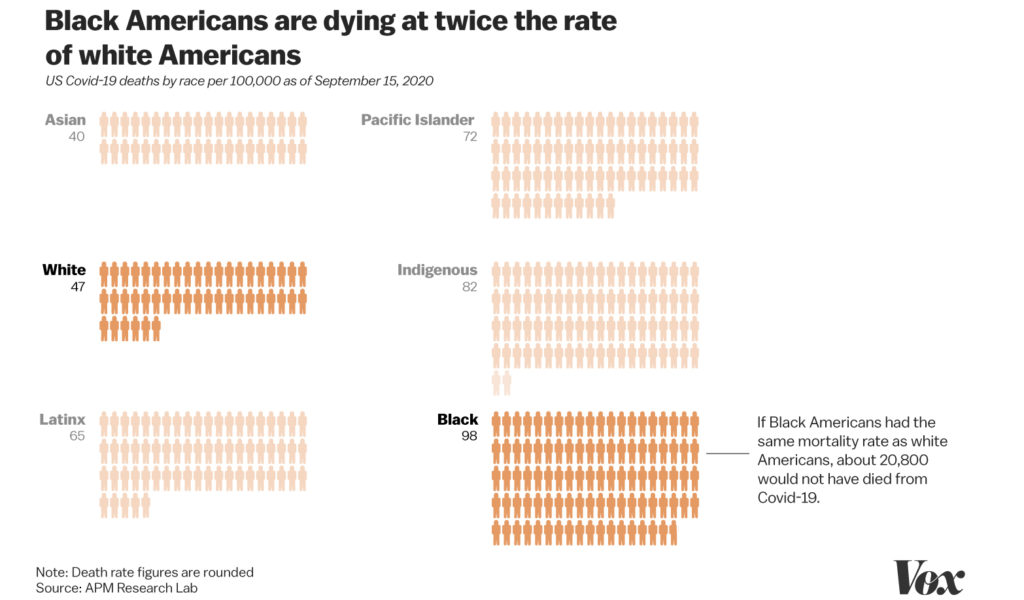 Vox reports that while Black people are dying at twice the rate of White people to COVID-19, “Trump does not bear all the responsibility for Covid-19’s toll on Black Americans. Long-standing health and economic disparities played an important role.”

Politico reports that nearly 1 million Americans have already voted via mail-in ballots in the presidential elections, but in North Carolina Black voters have a 4.3% rejection rate, compared to 1.1% for White voters in the state. The higher rejection rates are drawing concerns about how the Black vote will be affected in swing states like North Carolina.

The COVID-19 pandemic is presenting unique challenges for voters this election as more are looking at vote-by-mail and other methods of voting to remain safe from the virus. However, online disinformation continues to be a major issue as false information about voting is spread online. In a congressional hearing yesterday, Joint Center President Spencer Overton explained that efforts to spread online disinformation used to target and suppress Black votes is happening again in 2020. President Trump proposed limitations on Section 230, but as stated in Spencer’s testimony, these proposals would effectively discourage social media companies from removing misinformation about voting and COVID-19.

Noting that 74% of NBA players are African American and only 37% of Black men under 30 voted in the 2016 election, The Washington Post reports on the NBA’s increased efforts to register players to vote.

A lawsuit filed by the NAACP Legal Defense and Educational Fund (LDF), Southern Poverty Law Center, American Civil Liberties Union, ACLU of Alabama, and Alabama Disabilities Advocacy Program, resulted in a federal court ruling requiring the state of Alabama to better protect voters during the COVID-19 pandemic. This decision also allows Alabama voters with an underlying medical condition who can provide a statement to vote by mail without a witness or notary.

A September 2020 report by Democrats on the Senate Committee on Health, Education, Labor and Pensions (HELP) calls for Congress to provide public health relief to communities of color; the report shows that Black people are dying from COVID-19 at 3.4 times the rate of White people, according to NPR.

The Wall Street Journal reports that those dying from COVID-19, especially Black people, who comprise more than a fifth of coronavirus deaths, are least likely to have life insurance. 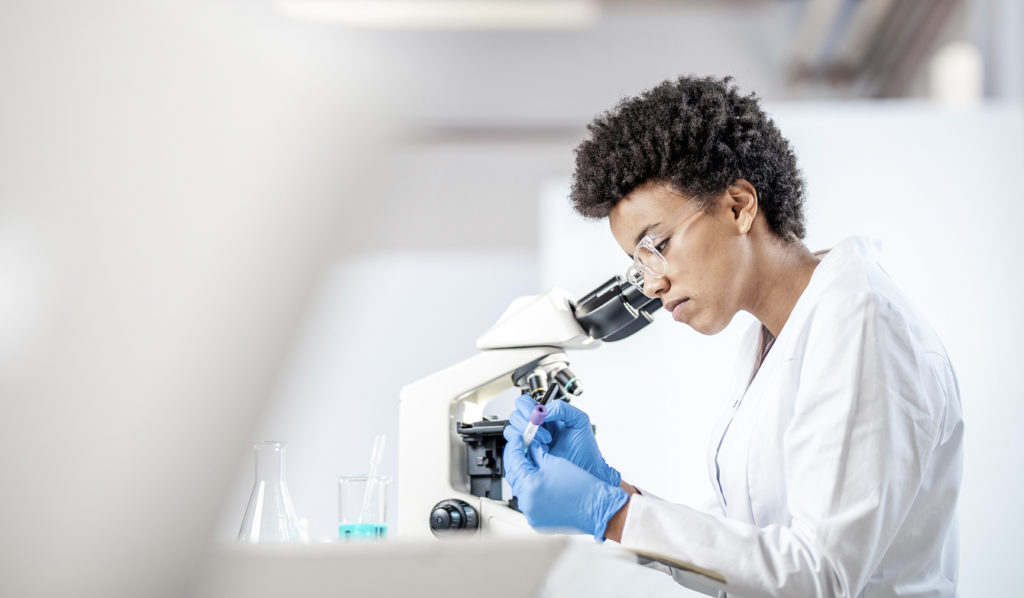 The New York Times reports on Black in Microbiology Week, a series of virtual events highlighting African Americans who work in the microbiology field to discuss “a range of topics under the microbiology umbrella, including the coronavirus” and ”disparities in medicine, education and career advancement.” Citing a study by the National Science Foundation, NYT states that “Black people make up less than 7% of students who earn bachelor’s degrees in science or engineering fields and less than 5% of people granted doctorates in microbiology each year.”

The Brookings Institution finds that Black, Latina/o, and Asian students are around 15 percentage points more likely than White students to live in a “remote-only” school district. According to Brookings, “[i]n the absence of aggressive policy interventions, this online learning gap could widen existing educational disparities by race.” ProPublica details the shortcomings and pitfalls of remote learning in underserved Black communities by students who don’t have adequate shelter, Wi-Fi, or computer equipment.

The Center for American Progress sounds an alarm about the decline of college enrollment by Black students during the COVID-19 crisis, recommending solutions including greater federal investment in debt-free college and increasing the size of Pell Grants.

South Carolina’s HBCUs share the challenges of leading their institutions while coping with both the COVID-19 pandemic and the social unrest triggered by the killings of George Floyd, Breonna Taylor, and other unarmed Black people.

Forbes speaks with an HBCU alum and student about the legacy of HBCUs and how the global pandemic has intensified the higher institutions’ fight for more resources and recognition.

Restaurant Opportunities Centers United issue a petition to put restaurant workers first by “demanding that the Right to Return and Hazard Pay policies be included in the RESTAURANTS Act and the new COVID-19 relief package.”

Southern Education Foundation releases Election 2020: Education Equity on the Ballot, an online voter guide that compiles education policy positions from the Democratic and Republican candidates for President, , the four southern governor seats open in 2020 (Delaware, Missouri, North Carolina and West Virginia) the State Superintendent of Public Instruction in North Carolina, and all candidates running for State School Board in Alabama and Texas.”.

The NAACP announces a long-term partnership with Hello Alice to create the Black-owned Business Center that will give over $4 million in grants to Black-owned small businesses, provide mentorship to participants, and supply access to resources on the Hello Alice platform.