Last week, despite optimistic tones expressed by the White House and House Speaker Nancy Pelosi (D-CA), the prospect of getting a new round of coronavirus relief passed before Election Day was deemed unlikely. 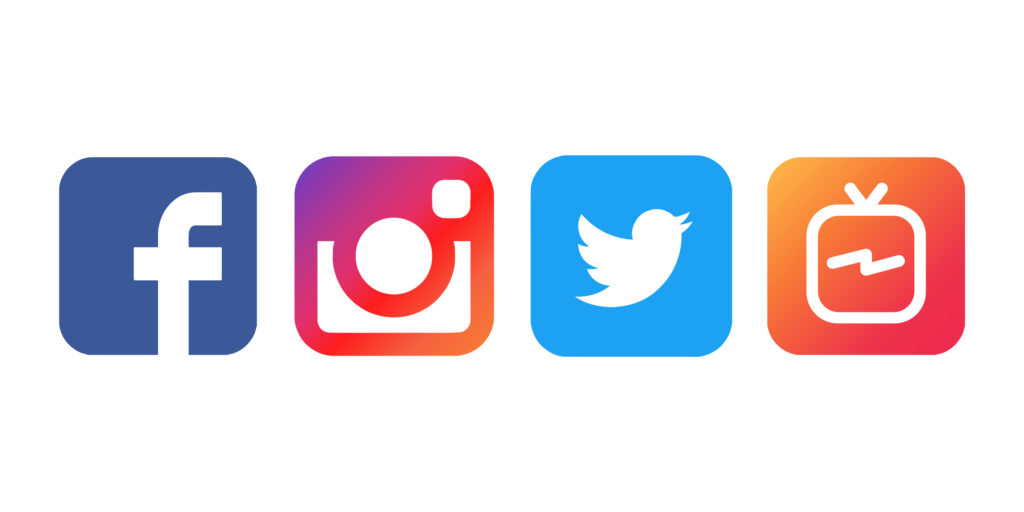 Unemployment claims dropped to 787,000 for the week ending October 17 but remained above the pre-pandemic weekly claims record high of 695,000, which was set in 1982. An additional 345,000 applied for Pandemic Unemployment Assistance (the federal program for gig workers and others who are not typically eligible for regular unemployment insurance).

The Economic Policy Institute notes that “[d]ue to the impact of historic and current systemic racism, Black and Latinx communities have seen more job loss in this recession and have less wealth to fall back on.”

John Jay College Professor Michelle Holder pens an op-ed in The Hill exploring the reduction of women in the labor force which states that “it wasn’t hard to predict that families were going to face tough choices about who would stay home with children engaged in full- or partial-distance learning. September labor force statistics seem to suggest that choices were indeed made, and that women were assuming the responsibility.” 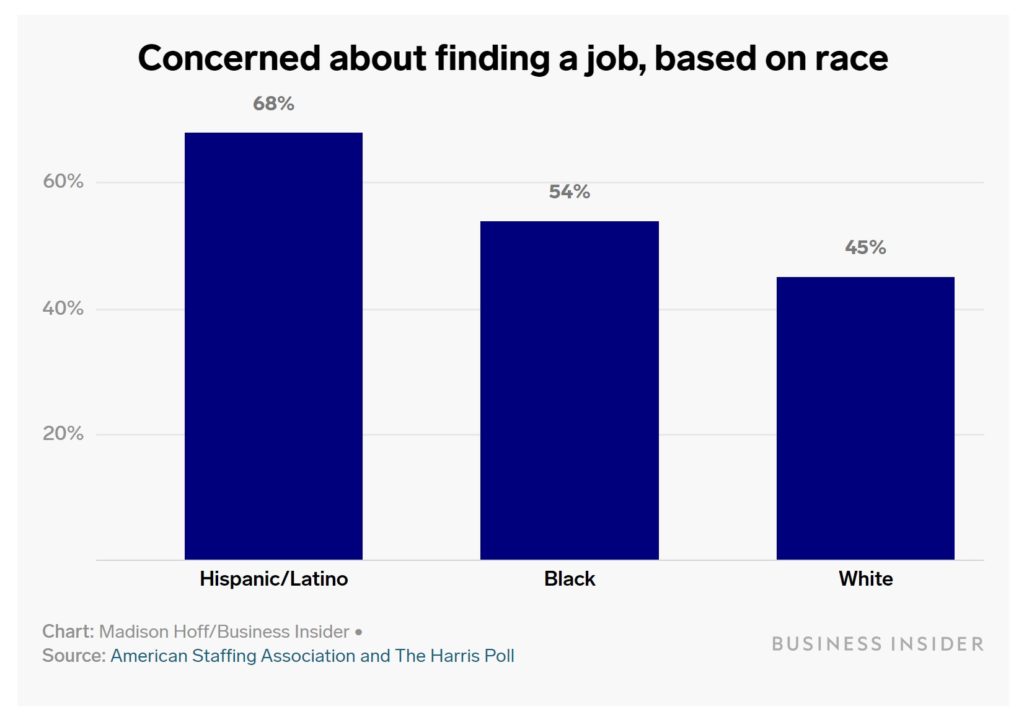 Business Insider examines a Harris Poll survey showing that Black and Latina/o Americans are having a harder economic time in the pandemic than their White counterparts. The survey polled 2,000 Americans and shows that 50% of Black and 58% of Latina/o respondents were concerned about losing a job, compared to 40% of White respondents.

An analysis of Census Bureau data by the Center for Budget and Policy Priorities finds that 59% of children in Black households are in households that find it somewhat or very difficult to pay for usual household expenses; 18% of Black adults and 17% of Latina/o adults say their households didn’t get enough food to eat during the survey period, compared to 7% for White adults; and, 26% of Black renters were behind on rent, compared to 20% of Asian, 19% of Latina/o and 11% of White renters.

The Center for Law and Social Policy (CLASP) concludes that the consequences of failed public policies for youth and young adults have been exacerbated by the COVID-19 crisis, with an even greater impact on young Black people, including greater unemployment and higher rates of homicide and police violence.

Yahoo Money reports on the Federal Deposit Insurance Corporation’s (FDIC) Survey of Household Use of Banking and Financial Services, highlighting that “before the pandemic, only 5.4% of U.S. households did not have a bank or credit union account. But a far higher share of Black and Hispanic households are unbanked, at 13.8% and 12.2%, respectively.” 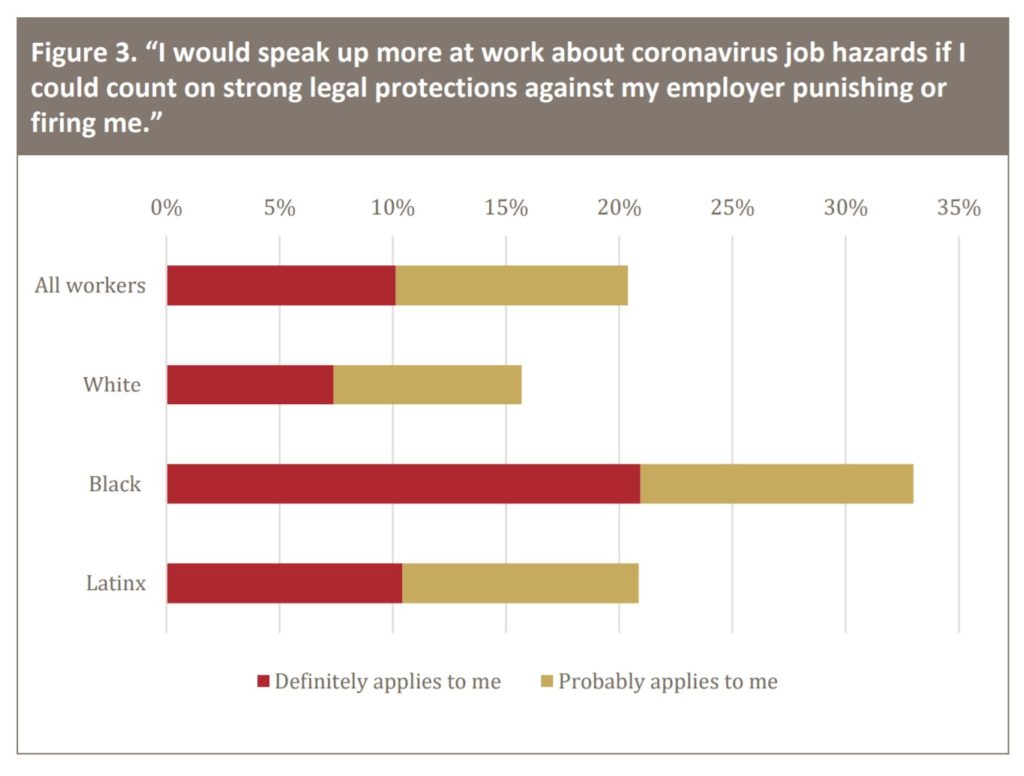 Emphasizing that “workers of color in particular, face some of the most severe impacts of the pandemic and recession,” CLASP releases a report, “In Their Own Voices: How Workers Earning Low Wages Struggle with COVID-19.” The report includes findings from interviews with low wage workers, including a heightened fear of retaliation, which has been shown to disproportionately affect Black workers.

Baltimore entrepreneur Andrew Suggs expands his Live Chair app concept into Live Chair Health, which is designed to help African American men assess their health while at the barbershop.

The National Association of County Officials releases a report “Assessment of County Needs in Economic Recovery from COVID-19,” which includes findings from surveys, interviews, and focus groups with county officials throughout the country. The report emphasizes how Black and Latina/o populations are disproportionately harmed by COVID-19.

Distrust of the election process is resulting in Black people turning out in unprecedented numbers to vote early in person. The Washington Post cites a Pew Research Center survey showing that 55% of Black voters say they expect voting to be “very or somewhat easy,” compared to 68% of White voters. 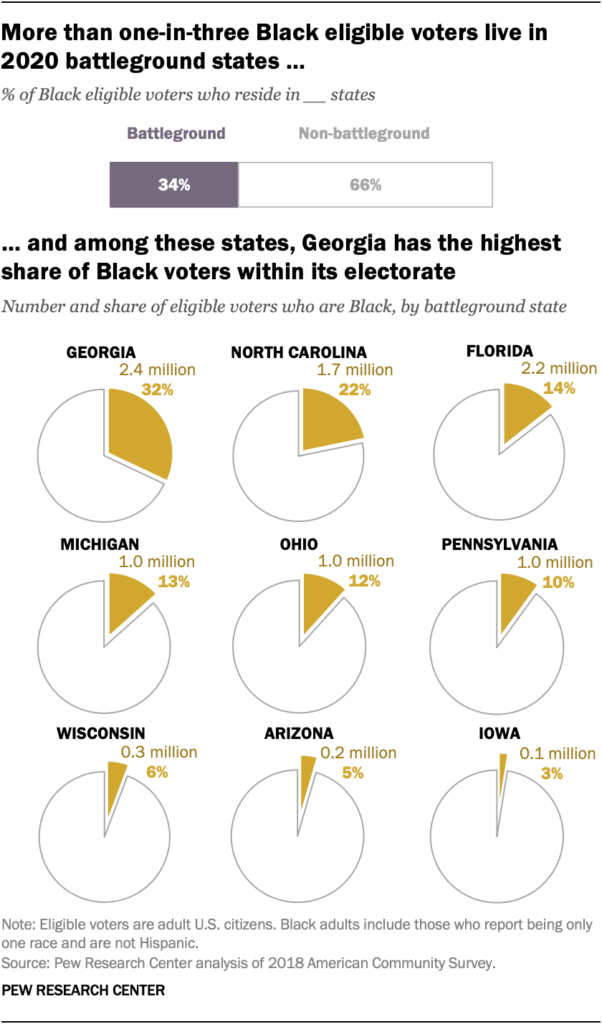 Pew Research releases a fact sheet demonstrating that Black eligible voters in 2020 comprise 12.5% of the electorate, up from 11.5% in 2000.e. More than 6 out of 10 Black registered voters surveyed are “extremely motivated” to vote. Thirty-four percent of Black eligible voters live in nine battleground states in the general election, including Georgia, Michigan, and North Carolina.

The Center for Public Integrity explores how Alabama’s long legacy of suppressing Black votes continues with the 2020 general election, including not offering early voting, requiring absentee ballots to be witnessed or notarized, and arguing against a court ruling allowing counties to offer curbside voting.

With the national focus on the possible development of a coronavirus vaccine, the African American distrust of a vaccine persists due to a long history of racism (most notably, the infamous Tuskegee experiment). The Hill points to a Third Way study showing that while 90% of respondents agree that vaccines are safe and effective against measles and other diseases, only 50% of Black respondents said they would be willing to take a COVID-19 vaccine, compared to 76% of White respondents.. Historically Black Colleges and Universities (HBCUs), in an effort to overcome the distrust of Black communities, are leading efforts to get more Black people to participate in vaccine trials and get tested for the coronavirus.

The Brookings Institution declares that public discourse about the need to protect teachers from the threat of COVID-19 as schools struggle to reopen has focused almost exclusively on K-12 school teachers, while hardly addressing the peril faced by teachers in child-care centers. Results of a pre-COVID-19 survey of early education teachers show Black teachers make up 25% of teachers at child-care centers, and only 7% of K-12 school teachers.

Demos makes the case for a federal guarantee of affordable or free access to a college education for all students.

Advancement Project partners with Win Black / Pa’lante to “motivate young voters of color to cast a ballot in the 2020 elections and fight mis- and disinformation targeting Black and Brown voters.”

Alternatives For Girls and Forgotten Harvest partner for their monthly grocery giveaway in Detroit. 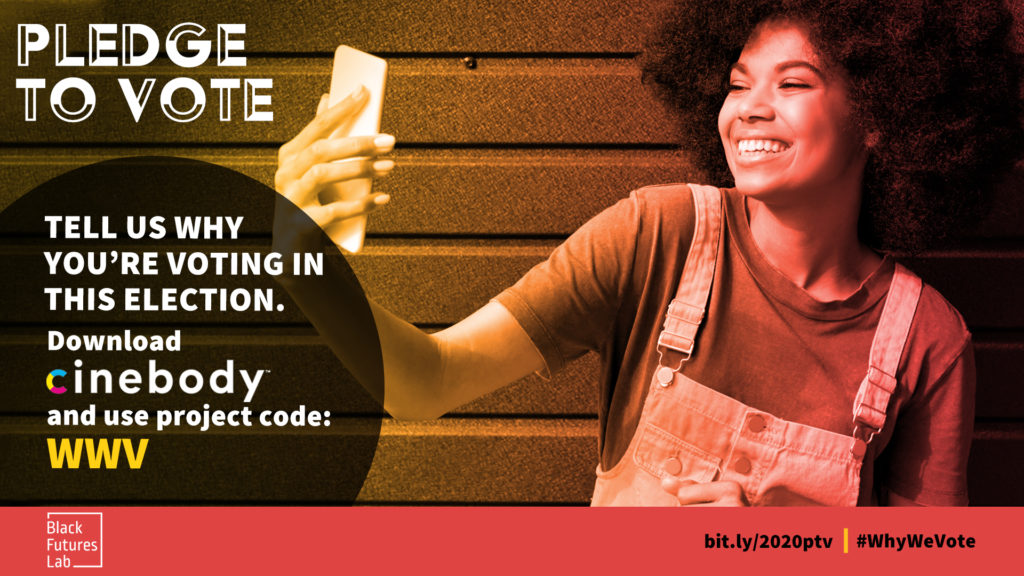