It’s Election Day! Since 1970, the Joint Center has celebrated and supported the civic engagement of Black communities. If you have not yet voted, visit vote.org to learn more about how to cast your ballot today. 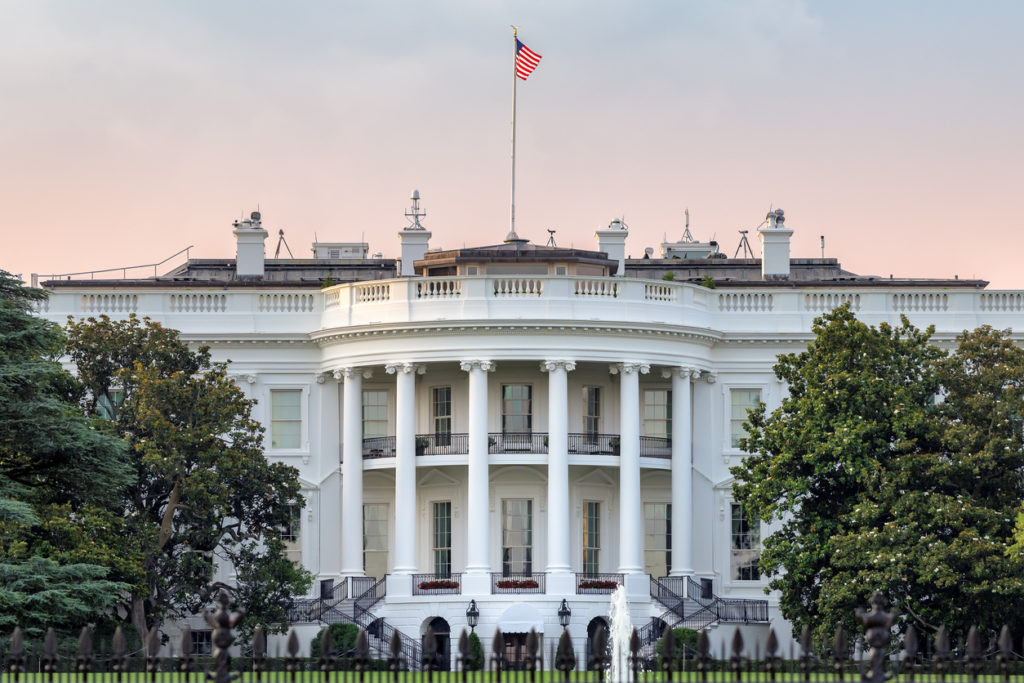 A stalemate between the White House and House Democrats continues to delay a new round of coronavirus relief as Speaker Nancy Pelosi (D-CA) presses Treasury Secretary Steve Mnuchin for an agreement on a proposed $2.2 trillion stimulus package. Blaming Pelosi for the failure to reach an agreement, President Trump says the White House will approve a “big” stimulus package after the election, assuming the GOP gains control of the House of Representatives.

Medicare will cover all costs of any FDA-approved COVID-19 vaccine under a new White House policy, The Hill reports. The policy also implements provisions of the CARES Act that call for most private insurers to cover a COVID-19 vaccine without cost-sharing.

Common Sense, Education Superhighway, and Boston Consulting Group offer recommendations to close the digital divide in K-12 public education. According to the recommendations, 30 percent of Black students live in households without access to broadband.

Initial unemployment claims fell to 751,000 for the week ending October 24. The number marks the lowest level since March 14, but remains higher than the pre-pandemic initial weekly claims record of 695,000 set in 1982. 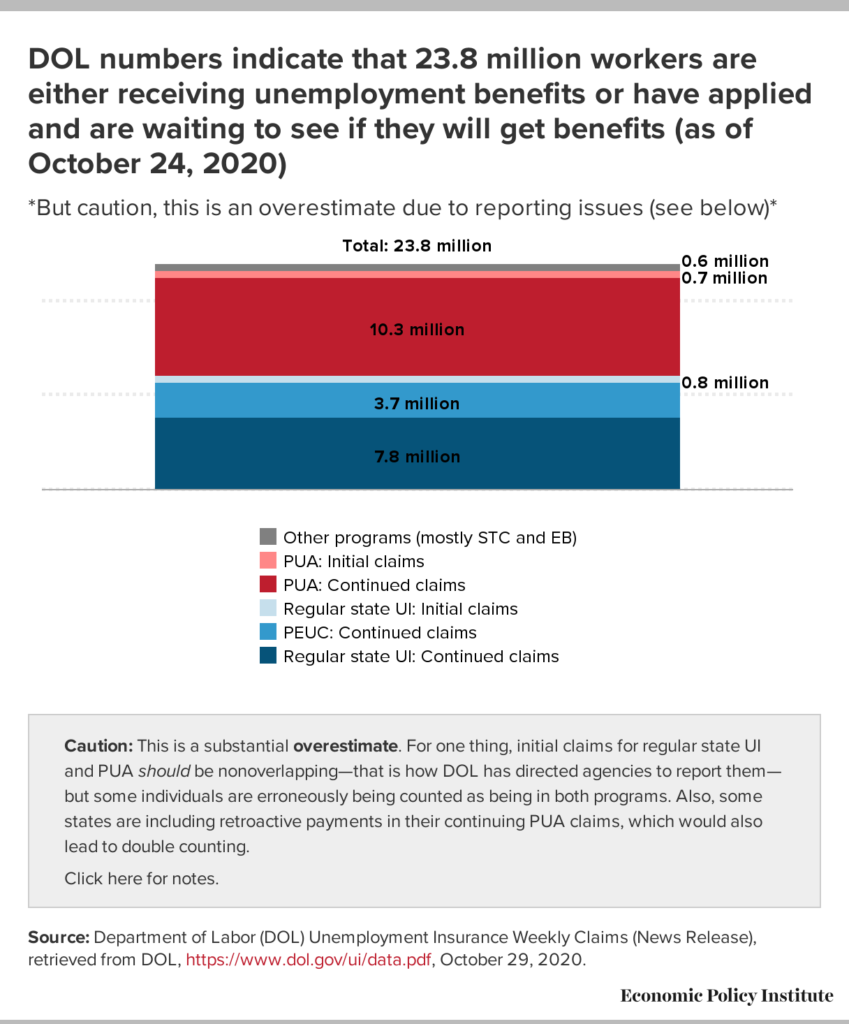 The Economic Policy Institute estimates that total initial unemployment claims were 1.1 million as of October 24 when including the 360,000 Pandemic Unemployment Assistance (PUA) claims. PUA covers gig and freelance workers who are not typically eligible for regular unemployment benefits.

Black and other communities of color continue to suffer disproportionately from the economic consequences of the coronavirus pandemic, according to the Urban Institute. Over one-quarter of adults in Black households surveyed between August 19-31 used savings or sold assets to meet economic needs in the previous week. Twenty-four percent of Black adults lived in households that were behind on rent payments. And approximately one-third of African Americans shared a household with someone expected to lose employment income in the next four weeks.

The current rental market could usher in another housing crisis, according to the Wall Street Journal, and people of color are at heightened risk since they are more likely to owe back rent. “Black and Latino Californians were twice as likely as white Californians to face rent insecurity amid the pandemic,” the Journal reports.

As many as 12 million people have yet to receive their stimulus checks, ProPublica reports, including up to 2 million eligible inmates of prisons and jails, who are typically supported by their families, and “who [themselves] are disproportionately low-income people of color—a demographic that has been hit hard by the pandemic’s economic fallout.” 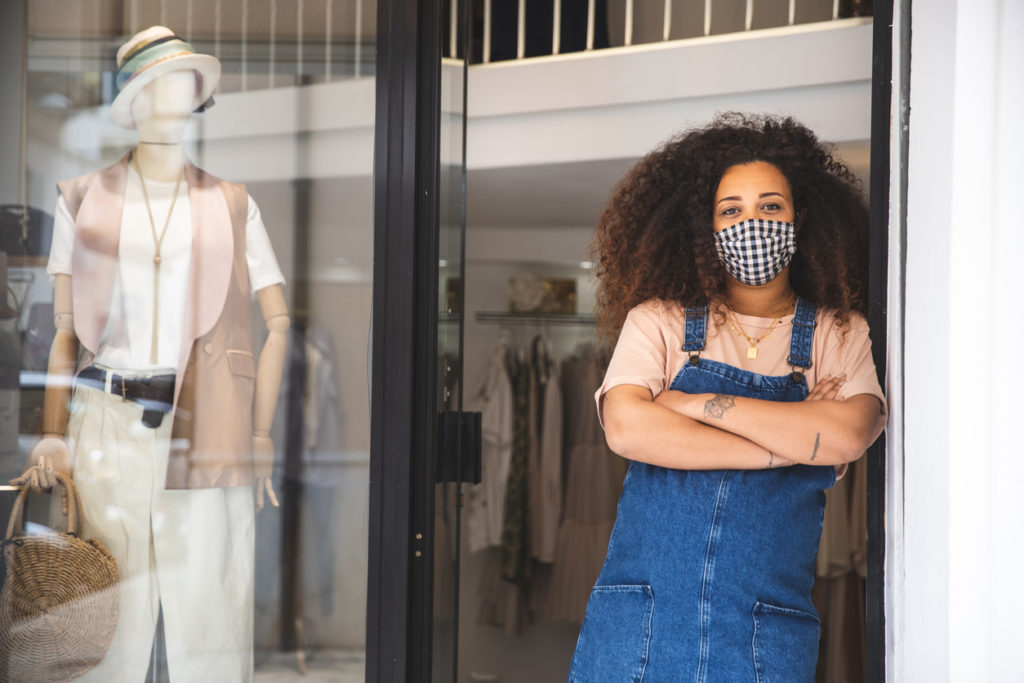 Forbes interviews Black women business owners decimated by the pandemic. According to Forbes, 31 percent of Black-owned businesses in Goldman Sachs’ entrepreneurial program say less than one-fourth of their pre-COVID revenue has returned.

As the COVID-19 pandemic reaches another peak, the Brookings Institution advocates for continued hazard pay for frontline essential workers. Brookings points out that nearly half of these low-wage, frontline workers are nonwhite, “with Black and Latino or Hispanic workers overrepresented among critical jobs that pay less than a living wage.”

A Washington Post columnist makes a connection between the need for Black people to participate in coronavirus vaccine trials and the economic recovery of Black communities, despite their mistrust of vaccines and the medical community. 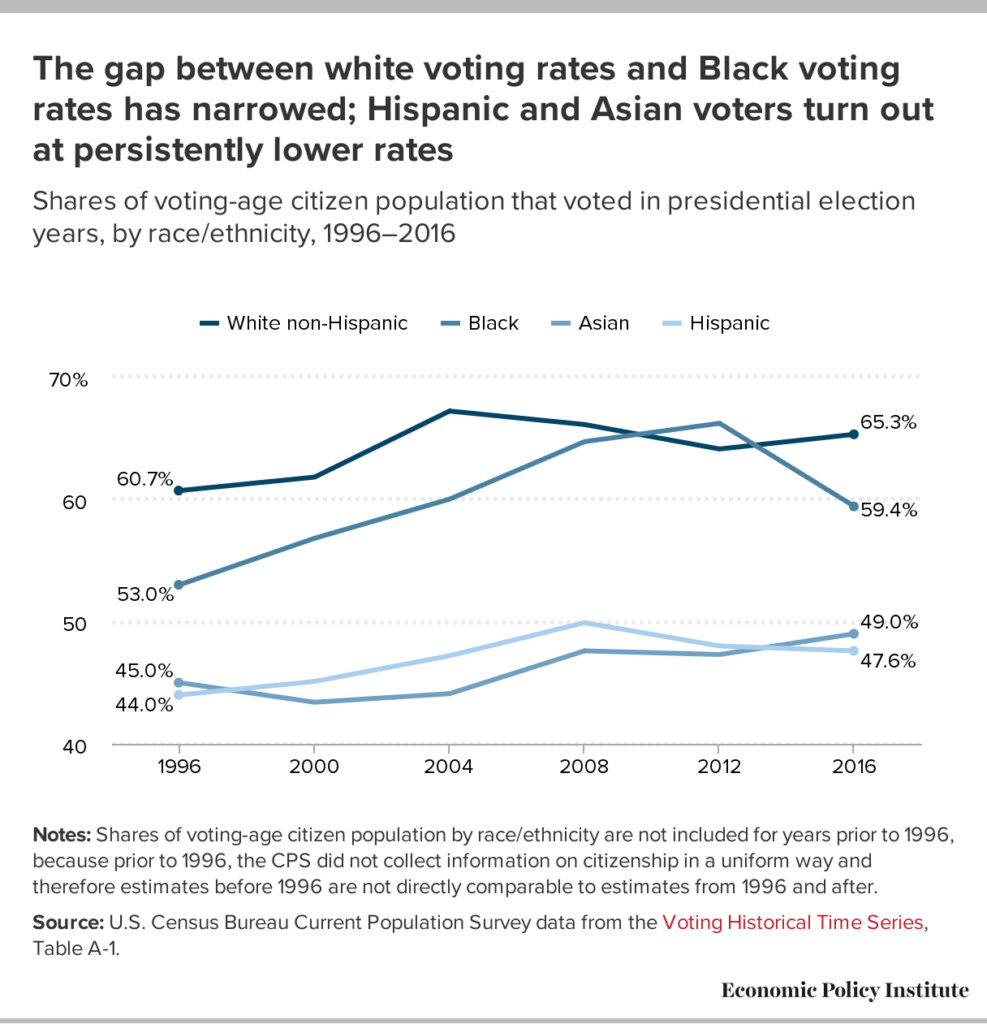 The Economic Policy Institute questions whether the groups most affected by COVID-19, including Black Americans, will turn out to vote on November 3. Black voter registration and participation has increased since the 1965 Voting Rights Act, closing the gap with white voters, but rates dipped below white voting rates in the 2016 presidential election, amid higher reports of voter intimidation and suppression as compared to recent elections.

Black high school and college students are being recruited as poll workers to step in for older people, who are more vulnerable to the coronavirus, NBC News reports. There are several volunteer recruitment efforts focused on urging young people, particularly people of color, to sign up to be a poll worker. As of October 23, more than 10,000 students have signed up, primarily in 10 battleground states. Last month, a partnership with More Than a Vote, a high-profile coalition of athletes like NBA player LeBron James, the NAACP Legal Defense Fund, and Power the Polls signed up 10,000 poll workers.

Lawyers’ Committee for Civil Rights Under Law President and Executive Director Kristen Clarke stresses the power of down-ballot races should not be overlooked in this election, citing local elections’ critical role in police reform, racial justice, and education.

COVID-19 creates significant burdens on students of Historically Black Colleges and Universities (HBCUs). Their families, for example, more often rely on them to work in order to assist with household expenses. The students also have increased mental health needs and suffer disproportionately from food insecurity, racial unrest, economic losses, and other fallout from the pandemic. 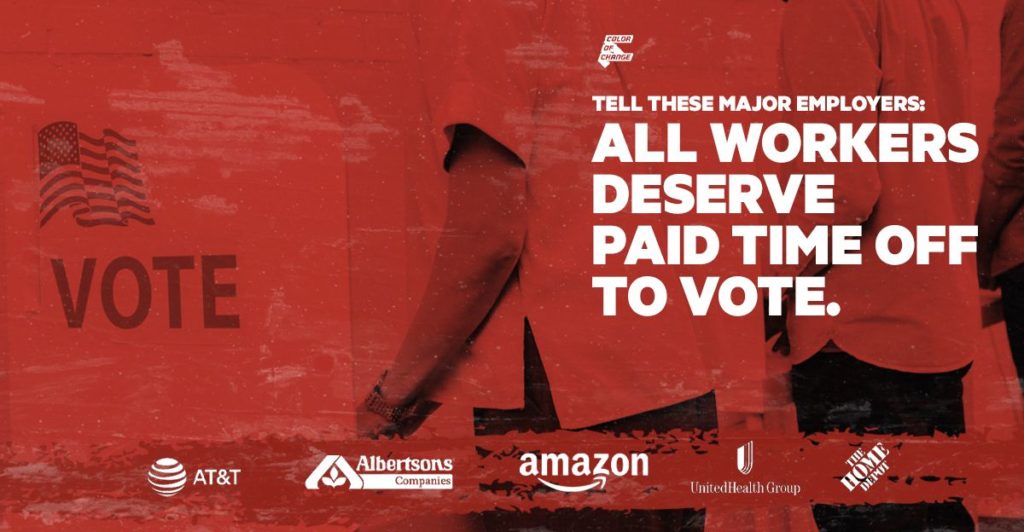 Color of Change issues a petition demanding Albertsons and Safeway to give their employees paid time off to vote.

Color of Change PAC hosts the virtual Black Joy Call Party to dance to music while calling Black voters in swing states to make sure their vote gets counted.

The Congressional Black Caucus releases a statement on the Senate confirmation of Judge Amy Coney Barrett: “Senate Republicans chose to prioritize voting on a Supreme Court nomination instead of voting on COVID-19 relief for the American people, disregarding the urgency of this relief for communities that have been hit the hardest due to the pandemic.”

SisterReach provides free food and more to voters in Memphis as they cast their vote.

The Hybrid University (Future U Podcast)