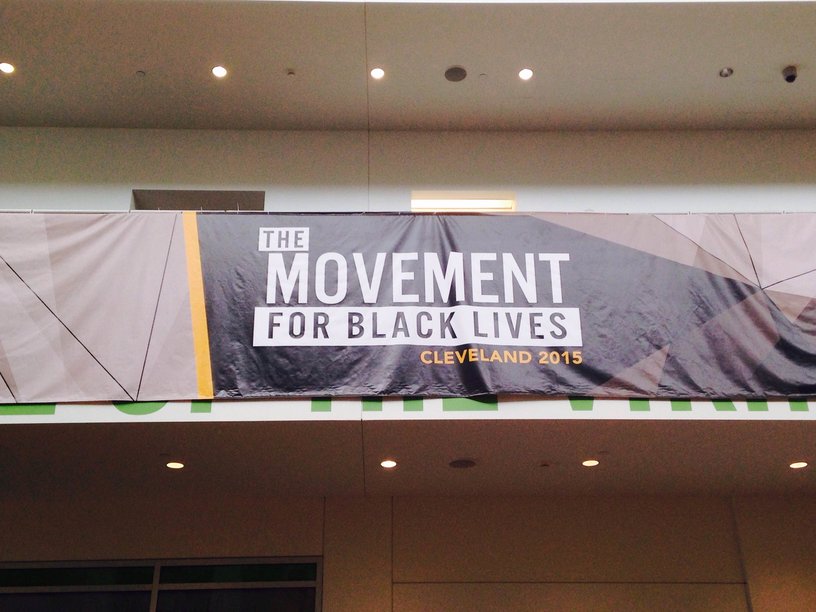 Joint Center Staff Assistant Samone Ijoma attended the Movement for Black Lives National Convening at Cleveland State University from July 24 to 26. That weekend, she joined nearly 2,000 people who gathered in support of the Black Lives Matter Movement. Supporters traveled from as far as the United Kingdom to stand in solidarity with the families of Mike Brown, Tamir Rice, Rekia Boyd, and many more who have been victims of state-sanctioned and vigilante violence.  Below Samone has given her major insights from her time in Cleveland.

The overarching principle that guided the Movement for Black Lives National Convening—All Black Lives Matter–challenged the movement itself and our communities to be intentionally inclusive in this fight for an acknowledgement of the humanity of all  Black bodies. At the opening ceremony, for example, there seemed to be no queer Black lives and trans Black lives represented on the screen or in the sharing of family memories, despite the fact that trans Black women–like India Clarke and Islan Nettles–are also being violently murdered at an alarming rate.   The next day, Black trans men and women who felt their stories had been erased from the conversation spoke candidly about their experiences and the lives of trans Black women and men who have been murdered and their stories ignored by mainstream media.  By that Sunday, I, among other audience members, found myself chanting “All Black Lives Matter!” and “Trans Black Lives Matter!” as we attempted to practice the inclusion of B

lack lives that the movement calls for.

[Re] Education of the Negro
Community organizers are often criticized as lacking direction or the ability to produce real tangible results such as policy or legislation, and the first session I attended, “[Re]education of the Negro: Political Organizing in Communities of Color,” focused on developing political strategy of community organizers and groups.  Facilitated by David Turner of UC Berkley and Black Lives Matter, LA, participants chose issues facing their own communities that they believed had not been adequately addressed through policy or by state and local elected officials, such as police sanctioned violence, mass incarceration, discrimination in housing, and the racialization of motherhood and reproductive rights.

Check Your Bias
On Saturday, July 25, I attended a workshop entitled “Check Your Bias: End American Denial of Racism” with Erika Maye of Active Voices. According to Maye, 48% of millennials believe discrimination against whites has become as big a problem today as discrimination against Blacks. Additionally, 48% of college-aged people believe the government has paid too much attention to the problems of people of color over the last few decades. Furthermore, 53% of white people believe race doesn’t affect police use of deadly force, and 45% of white people say police killings are isolated incidents and not part of a boarder problem. The statistics that Maye provided were used as a framework for our discussion of racial bias among white Americans and internalized racism amongst people of color.  Session attendees discussed the ways in which racism and implicit biases had influenced their own lives, and whether the people representing communities of color (including policy makers) should be charged with “checking their bias.”

Attending the Movement for Black Lives National Convening was moving and transformative.  The experience left me and other attendees feeling rejuvenated and positive about the future of the Black Lives Matter Movement and the fight for Black humanity.