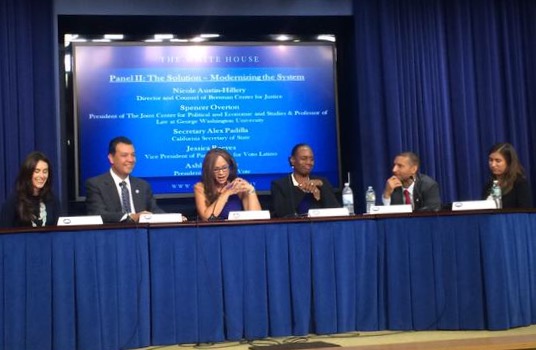 August 6, 2015 was the 50th Anniversary of the day President Lyndon Johnson signed the Voting Rights Act.

The Joint Center Report 50 Years of the Voting Rights Act: The State of Race in Politics was cited in several publications, including the New York Times, the Associated Press, and Aljazeera America. One of the authors of the report, Dr. Zoltan Hajnal, appeared on the PBS NewsHour to discuss the report’s findings.  Watch by clicking here.
Joint Center President Spencer Overton spoke at a White House commemoration featuring President Obama, Attorney General Loretta Lynch, and Congressman John Lewis.

First, we need to advance the overlapping but distinct goals of preventing voting discrimination and expanding participation in voting for all Americans.  While these goals sometimes overlap (e.g., rolling back unnecessary voting restrictions that make voting more difficult and disproportionately exclude minorities), they are sometimes distinct.  For example, some instances of discriminatory election laws—like the shift from single-member districts to at-large elections in certain contexts—do not make it harder to cast a ballot, but may dilute minority voting strength.
Second, when we talk about updating the Voting Rights Act, we shouldn’t start in the weeds but focus on the big concepts.  The goal should be to develop a process that most effectively stops discriminatory election rules before they are used in elections.  Litigation is an important tool, but litigation alone too often does not detect discriminatory changes, is expensive, is slow, and does not stop discriminatory changes before they are used in an election.  Thus, we need a process that allows for preclearance in areas known to have recent problems, nationwide disclosure that will deter discriminatory changes, and streamlining of the judicial process to block a discriminatory change before it is used in an election.

The Joint Center also participated in a voting rights roundtable at the 50th anniversary of Selma, Alabama. Coverage of this event, along with photos can be found here.