Next Stimulus Package Still Looms:
Here’s What It May Include 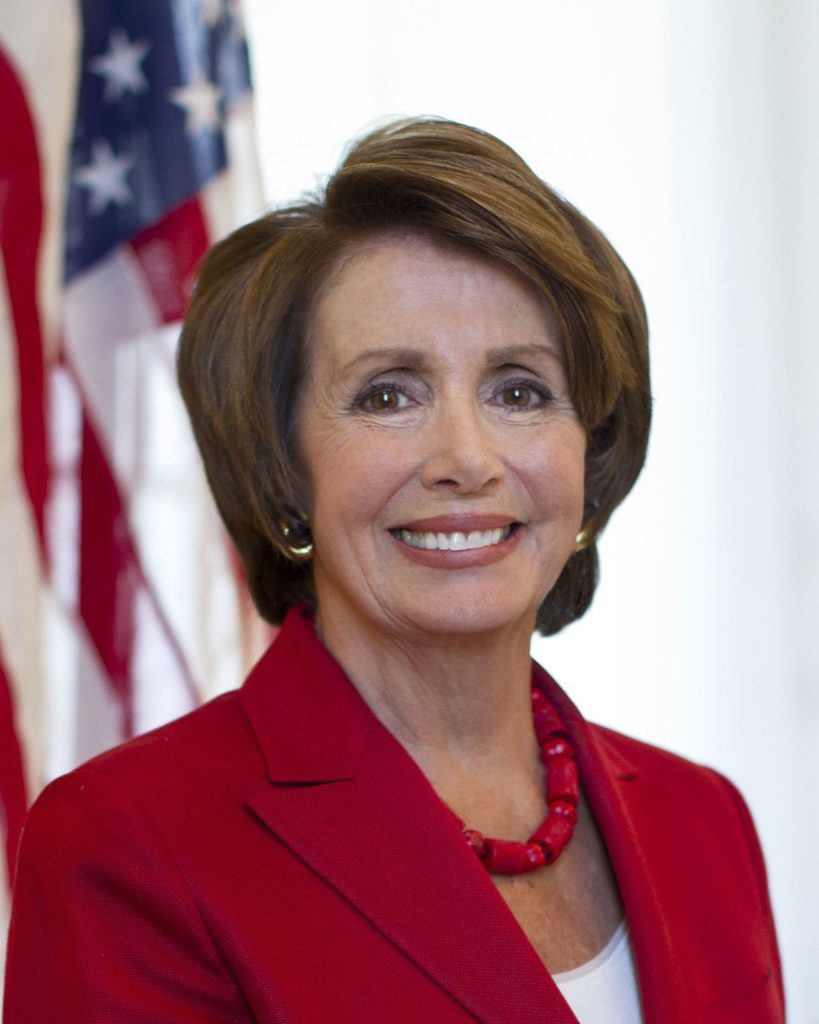 House Speaker Nancy Pelosi gave more details about what House Democrats are looking to propose in the House’s next $2 trillion stimulus package proposal. While a House bill could be out within the next couple of days, the next bipartisan stimulus bill may not pass until just before the July 4 recess—if at all.

The House Democratic package that could be released this week could have money for states and localities, extended unemployment insurance and Supplemental Nutrition Assistance Program (SNAP), federal money to directly pay workers, hazard pay for frontline workers, expanded testing and contact tracing, and money for the postal service (the Leadership Conference and others urged more funding for the postal service for increased vote-by-mail ballots).

Speaker Pelosi stated that the new package would also include stabilizers to ensure that if certain indicators fall below a certain target, funding would automatically channel to those areas. This would hold true particularly for unemployment benefits, SNAP, and Medicaid. She said these triggers are needed so that benefits to vulnerable populations aren’t delayed amid crises due to partisan stalemates on Capitol Hill.

Targeted Medicaid funding is important because some states are starting to cut state spending on Medicaid due to drops in tax revenue (in 2018, 34% of nonelderly African Americans were covered by Medicaid). Likewise, according to a Washington Post poll conducted from April 27 to May 4, Black households experiencing a layoff are twice as likely as all households to say they received food stamps since the shutdown began (29% of Black households compared to 14% of all households).

Democrats and President Trump have indicated support for additional stimulus checks to individuals. Congresswoman Pelosi, Senator Bernie Sanders, and other lawmakers voiced support to include $2,000 in recurring monthly payments to Americans in the next stimulus package. (For details, see The Hill on Friday and Saturday).

However, Senate Majority Leader Mitch McConnell has expressed the need to “pause” on providing further aid. Senator McConnell indicated that “[i]f there is another rescue package, it must include and will include liability protections.” NAACP LDF’s position is that “allowing businesses to be shielded from liability will further exacerbate the impact on the Black community,” which makes up a disproportionate number of frontline and essential workers.

Past Stimulus Misses Mark for Many Black Businesses

The average loan size for round two of PPP is $73,000 compared to $206,000 for round one, which suggests that smaller businesses are accessing the capital this time. As of last night, just over $188 billion of the program’s $310 billion had been allocated.

Some small business owners are finding that meeting the requirements to have the loans forgiven is more arduous than expected. While the CARES Act stated that the PPP loans could be used for payroll, mortgage interest, rent, and utilities and did not indicate a precise portion to be allocated for payroll, the SBA regulations required that 75% of the loan proceeds be used for payroll. House Speaker Pelosi has indicated she plans to eliminate this requirement.

To help address these issues, on Thursday the Joint Center will host an online briefing on Black Businesses, Access to Capital, and Future Stimulus Proposals.

Majority Whip James Clyburn chairs the committee and House Financial Services Chair Maxine Waters is a member. As previously mentioned, their leadership is particularly important because there are no African American Members on another oversight body appointed by House and Senate leadership—the Congressional Oversight Commission. 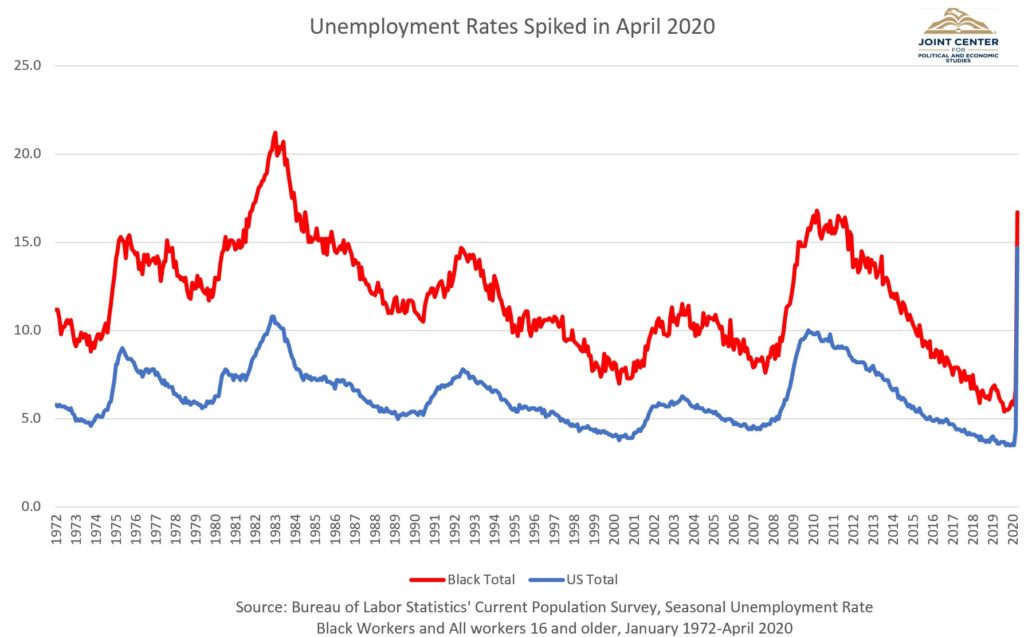 Unfortunately, this dataset likely underestimates the impact of this crisis because the it only counts those who are actively looking for work and may discount people who are unable to search for jobs because of childcare responsibilities or lack of access to the internet for job searches.

A Washington Post survey conducted April 27-May 4 indicates that 16% of Black adults said they had been laid off or furloughed since the coronavirus outbreak began, compared to 11% of whites and 20% of Latinos.

The Bureau of Labor Statistics also reported that almost every job is at risk, with only the general merchandise stores industry adding jobs. Those include warehouse clubs and supercenters that sell groceries and other home items.

The Joint Center and Hispanic Telecommunications and Technology Partnership co-hosted a webinar on telemedicine for Black and Latino communities. Guests included founder and co-chair of the bipartisan Congressional Telehealth Caucus Congressman Mike Thompson (D-CA) and FCC Commissioner Geoffrey Starks, who urged communities in need to apply for the COVID-19 Telehealth Program as soon as possible to receive assistance.

Spencer was quoted in Naomi Cahn’s column in Forbes op-ed “Mother’s Day and COVID-19’s Impact On Women Of Color.”

A new study by amfAR shows that counties with above average Black populations (greater than 13% of the county population) account for 35% of the U.S. population but 58% of the nation’s COVID-19 deaths, and reveals the need for adequate health insurance (11.5% of nonelderly African Americans lacked health insurance in 2018—slightly up from 10.7% in 2016).

Third Way highlights the benefits of healthcare legislation introduced by House Education and Labor Committee Chairman Bobby Scott for the federal government to pay 100% of premiums and to offer employer incentives. Dr. Patrick Sullivan, professor of epidemiology at Emory University, recommends “emergency enrollment for the Affordable Care Act” and “Medicaid expansion in the South.”

The Center on Budget and Policy Priorities (CBPP) predicts millions more will enroll in Medicaid in the coming months and that Congress needs to expand the provisions in the existing Families First Coronavirus Response Act because it “provides far less funding than states need; it will end soon, and it does not apply to enrollees covered through the Affordable Care Act or Medicaid expansion.”

Several efforts continued to ensure fair voting. The Leadership Conference held multiple events to urge officials across the country to ensure fair, safe, and accessible elections in 2020. Rainbow PUSH endorsed Senator Amy Klobuchar’s Natural Disaster and Emergency Ballot Act of 2020 which would “require states to establish contingency plans for the conduct of elections for Federal office in response to national disasters.” NAACP LDF filed a federal lawsuit challenging Louisiana voting requirements that put voters at risk amid the COVID-19 pandemic.

National Action Network also led a coalition of national Black faith and civil rights leaders that called on Congress to “ensure that state and local governments have the resources needed to support communities of color across the nation.”

NAACP LDF wrote a letter to Arkansas Governor Asa Hutchinson urging a statewide moratorium on evictions to protect tenants who have experienced economic hardship from the COVID-19 pandemic. LDF also condemned the NYPD for “excessive use of force in Black and Brown communities” in connection with the enforcement of social distancing rules.

Color of Change’s Rashad Robinson wrote in the Guardian that a failed and corrupt response to COVID-19 is killing Black businesses, jobs, votes, and people. Color of Change is also calling for Congress to protect Black-owned businesses through small business grants, a mandate for a full, public accounting by race, gender, and geography of where stimulus money has gone, and targeted support funds for Black-owned businesses. 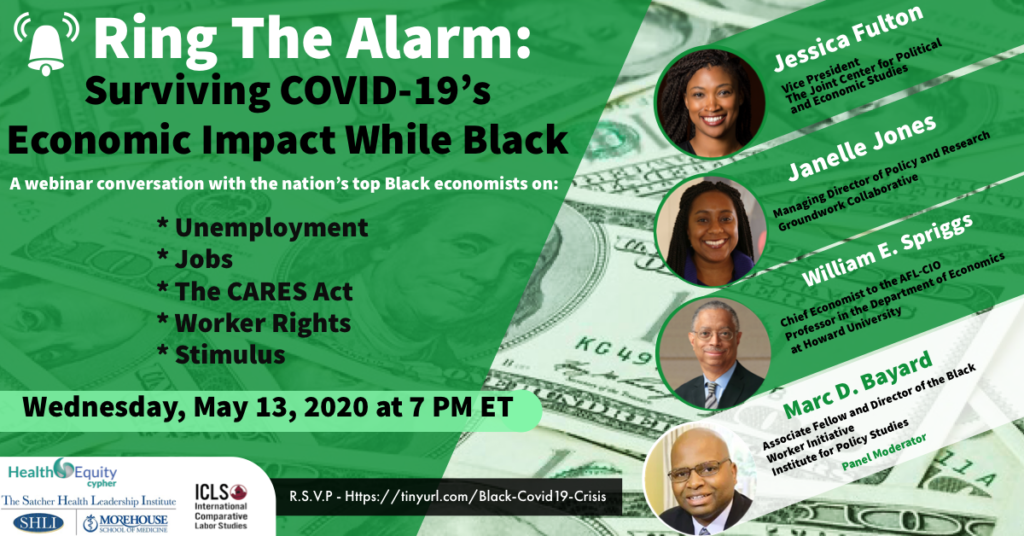 Upcoming events include “We The People: Protecting Our Vote in the Wake of COVID-19” (Lawyers’ Committee for Civil Rights Under Law, May 11); “Crisis Conversations” (NAACP, May 12); “COVID and Black Workers: Outlook, Opportunities and Challenges” (New America, May 12); “Surviving COVID-19’s Economic Impact While Black” with Joint Center Vice President Jessica Fulton (Morehouse College, May 13); “How Black Communities Can Achieve Employment, Business, and Income Resilience During and After COVID-19” (New America, May 14); “Valuing Black Lives and Property in America’s Black Cities” (Brookings, May 19).

Last week events were held by Black Communities: A Conference for Collaboration, The Movement for Black Lives, Center on Budget and Policy Priorities, and Urban Institute.