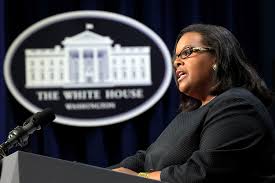 “I am confident that I am here because many people who lived before I was born were determined that I should have opportunities that they could only witness in dreams and articulate in prayers.”
– Jacqueline Berrien

Jacqueline Berrien, a civil rights lawyer and former chair of the Equal Employment Opportunity Commission, has passed away at the age of 53 from cancer.  Berrien became ill in August during the NAACP’s march from Selma, Alabama to Washington. “Her last act was doing what she loved: civil rights,” said her husband, Peter M. Williams, according to the New York Times.

“The Joint Center community has suffered a significant loss,” said Joint Center President Spencer Overton. “I first met Jackie in the mid-1990s when she coached me on my first voting rights matter.   This year, Jackie played an essential role in advising us on the rebuilding of the Joint Center. Throughout that time, she was the embodiment of credibility, commitment, intelligence, and generosity.  I have always looked up to her, and she inspired and shaped many of us. We thank Peter and her other family members for sharing her with us, and they are in our thoughts and prayers.”

Berrien was a distinguished civil rights lawyer who was devoted to public service. During her term as chair (2010-2014), the EEOC had numerous successes, including creating rules against discrimination in employment and health-insurance enrollment on the basis of disability or genetic test results and winning the largest settlement award to date under the Americans with Disabilities Act.

A Washington, D.C. native, Berrien graduated from Oberlin College and Harvard Law School. After obtaining her law degree, she clerked for the Honorable U.W. Clemon (the first African-American appointed to the U.S. District Court in Birmingham, Ala.), and she worked for the Voting Rights Project of the Lawyers Committee for Civil Rights and for the National Legal Department and Women’s Rights Project of the American Civil Liberties Union. Berrien also served as the Associate Director-Counsel for the NAACP Legal Defense and Educational Fund (where she focused on voting rights and school desegregation litigation), and she was a program officer at the Ford Foundation.  She also taught trial advocacy programs at Fordham and Harvard.

The Washington, DC funeral service is on Saturday, November 21 (10 am viewing and 11 am services), and a New York City memorial service will be on Saturday, December 5 (click here for a Facebook page providing service details and an opportunity to share condolences).  In lieu of flowers, Jacqueline’s family requests donations to the Black Women’s Health Imperative, 1726 M. St., NW, Suite 300, Washington, D.C., 20036, (202) 548-4000.