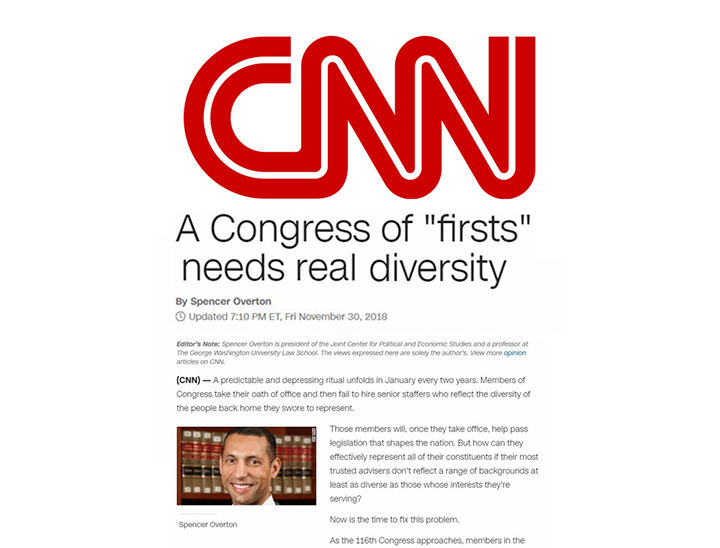 WASHINGTON – In a CNN op-ed, Spencer Overton, president of the Joint Center for Political and Economic Studies, highlighted the alarming lack of top staff diversity at the top level in the Washington offices of Members of both the U.S. House and U.S. Senate.

Overton argued that now is the time to address this vexing issue, writing “as the 116th Congress approaches, Members in the House and Senate will have hundreds of top and mid-level openings to fill. Newly-elected Members will need to hire their entire office staffs, and many House Democrats taking over as Chairs of committees will need to double the size of their staffs. A serious commitment to diversity in hiring over the next four months can go a long way toward fixing the problem.”

Overton cited examples from Delaware, Maryland, Mississippi, Tennessee, and Virginia to illustrate disturbing trends that show that people of color make up a disproportionately low percentage of top staffers who serve both Democratic and Republican U.S. House and U.S. Senate Members.

Overton added that the “next weeks and months are a critical time to act to promote staffing diversity,” and “rather than letting this opportunity pass, Congress should use this window to diversify their offices and do more to finally give all Americans a voice.”

Statistics on top staff diversity on the Hill can be found in the Joint Center’s recently released six state reports, its September 2018 House report, and its December 2015  Senate report.