A new report published by the Hamilton Project discusses ways to address the interrelated problems of violence and school dropouts. In the United States, there has not been a significant improvement in increasing high school graduation rates or reducing the occurrence of violent crimes. This is largely due to the fact that there has been no clear solution to how to help disadvantaged youth (which are largely from minority groups) overcome their difficult circumstances.

School truancy is one the earliest indications of risky behavior among youth and it is a significant problem in minority and impoverished communities. For example, 87% of the students in Chicago Public Schools are impoverished and over 90% guaranteed of those students are minorities.  Nearly 1 in 8 Chicago Public School students miss over 4 weeks of school annually.  This creates more problems because continued truancy leads to dropouts, which is a big issue in the United States where the average rate of graduation is just 53 percent. Even more alarming is that this rate has not changed significantly in about 40 years. 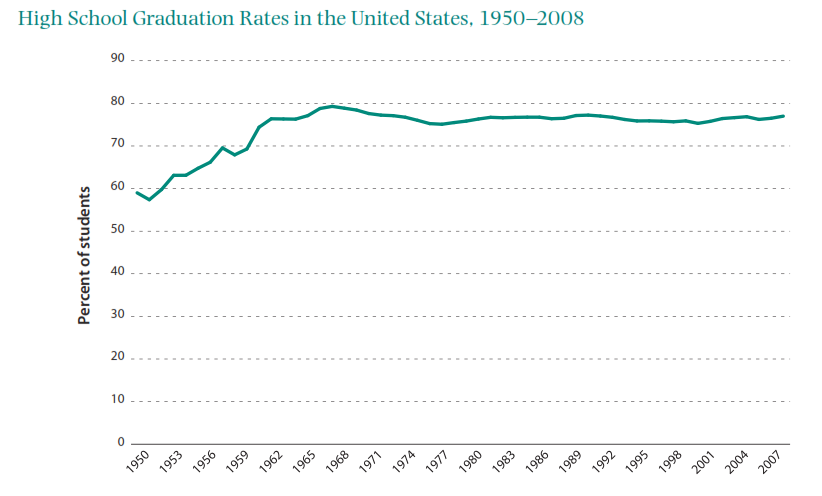 Resolving issues of crime has been at a similar standstill. Over the past 40 or 50 years, there has been no clear solution to the problem of increasing crime. The United States has the highest incarceration rate in the world.

The report indicates that more success will come in addressing violence and school dropouts by turning to solutions that determine what really drives human behavior. The assumption has long been that these young people are in trouble because they refuse to consider the future consequences of their choices.  But in fact, psychologists’ studies show that people’s choices (both advantaged and disadvantaged) are automatic and learned.  Therefore, the report indicates the best method of aiding disadvantaged youth is for the government to provide them with one year of behavioral training in order to establish new automatic choices and learned responses.  This type of cognitive behavioral therapy is expected to reduce the rate of violence and to improve school graduation outcomes for youth. Ultimately, the potential benefit to society greatly outweighs the costs of implementing these types of programs because not only will youth be positively affected, but income inequality will be reduced and the United States will be more economically competitive on an international level.