First draft of the budget proposal: Today, the White House will release its budget plans for the 2022 fiscal year. The plan proposes $1.52 trillion in spending, including a 16% spending increase on domestic priorities like education and reducing poverty. President Biden has yet to nominate a replacement for the Office of Management and Budget (OMB) Director position after Neera Tanden withdrew her nomination. Many Black organizations, including the Joint Center, have urged President Bident to nominate Shalanda Young, who was confirmed by the Senate as the OMB deputy director, for the top position. 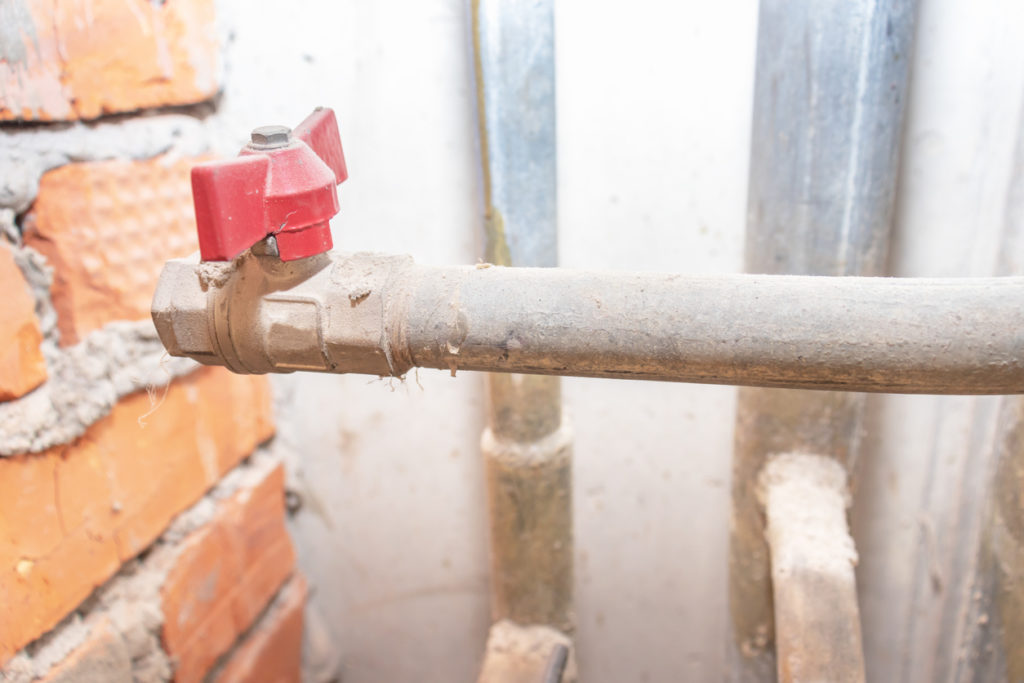 Including racial equity in infrastructure: PBS White House Correspondent Yamiche Alcindor explains how President Biden plans to “make racial equity a central part of his infrastructure plan.” The $2.3 trillion plan proposes “$20 billion to invest in communities historically hurt by infrastructure plans” such as Black communities disrupted by highway projects, $45 billion to eliminate lead pipes and ensure there’s access clean water which has been a devastating issue in areas like Flint, Michigan, $100 billion to expand broadband, and “$400 billion is dedicated to in-home care for disabled and older Americans.” The plan has been met with opposition by some Republicans who say an infrastructure plan should only include funding for its traditional definition of roads, bridges, ports, and airports instead of “issues like home care, electric vehicles, and even water pipes.” President Biden has since said he is open to compromising on “good ideas and good faith negotiations” but “will not be open to doing nothing” or “inaction.”

President Biden considers student debt cancellation options: According to White House press secretary Jen Psaki, President Biden has not completely ruled out cancelling up to $50,000 of student loan debt per person but is extensively reviewing what his options are with the Departments of Education and Justice. Black and brown borrowers are disproportionately impacted by the $1.7 trillion student debt crisis in America, and forgiving large student debt forgiveness “would account for the racial and gender gaps in what borrowers owe.”

Executive actions on gun violence: President Biden announced a series of executive orders addressing gun violence, with a particular focus on restricting ghost guns (a disassembled and untraceable gun kit that doesn’t require a background check to purchase). Advocates explain immediate action from President Biden could “change or expand the definition of who is in the business of selling guns and prioritize funding for community violence prevention programs.” The gun violence prevention bills introduced by members of the Congressional Black Caucus (H.R.8, the Bipartisan Background Checks Act and H.R. 1446, the Enhanced Background Checks Act of 2021) face an “uphill battle in the Senate.” 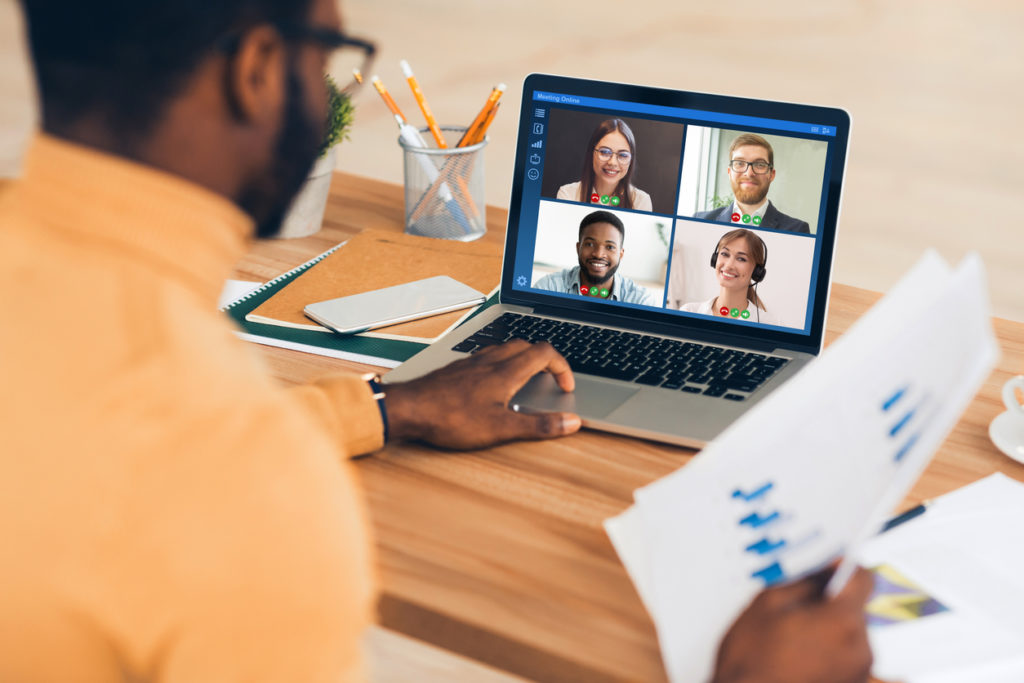 A push for expanded broadband access: The National Urban League’s new strategy, The Lewis Latimer Plan for Digital Equity and Inclusion, aims to connect every household to broadband networks and create opportunities for underserved communities to participate in the digital economy. House Majority Whip James E. Clyburn (D-SC) and Senator Amy Klobuchar (D-MN) also introduced legislation to extend broadband infrastructure through the Accessible, Affordable Internet for All Act (summary here). Senators Cory Booker (D-NJ) and Raphael Warnock (D-GA), FCC Commissioner Geoffrey Starks, and Color of Change President Rashad Robinson emphasize the urgency of digital equity to ensure Black communities are “heard in our democracy by the most powerful forces and reach the marketplace of jobs, commerce, and ideas.” 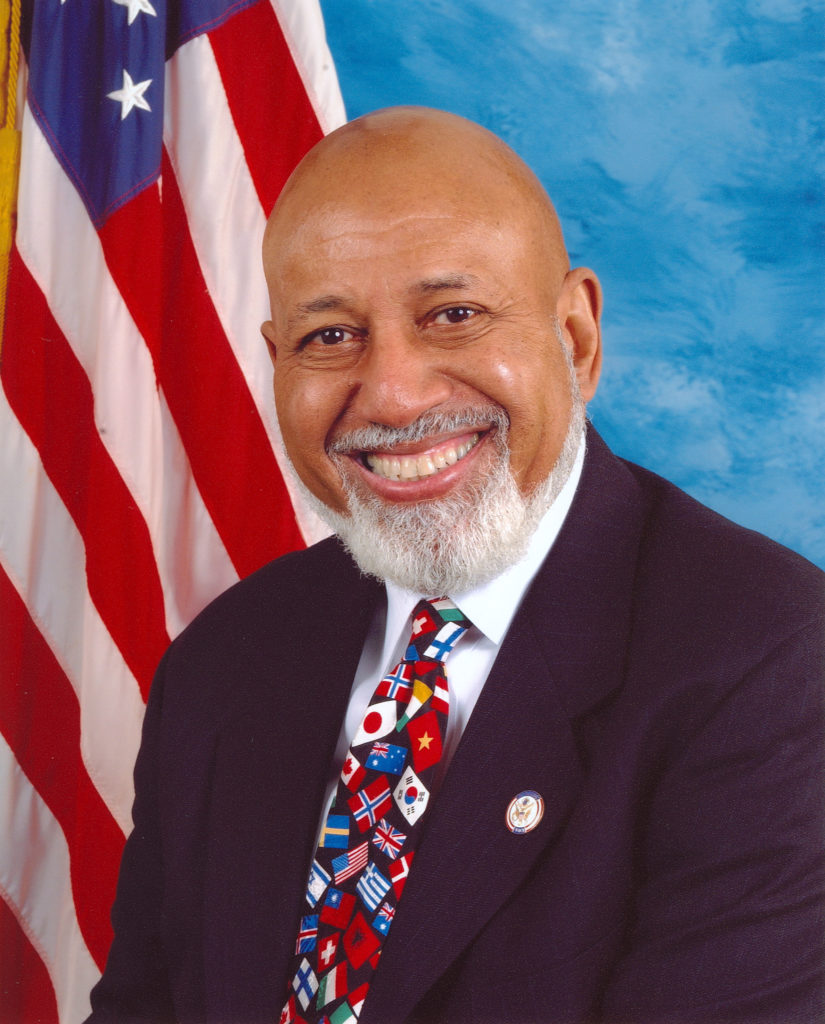 Joint Center mourns Alcee Hastings: Congressman Alcee Hastings, an elected official who represented several majority-Black precincts in South Florida for nearly three decades, passed away earlier this week. He was 84. In a statement, the Congressional Black Caucus called him a “fearless fighter for his District and a leading voice in the fight for civil and voting rights.” 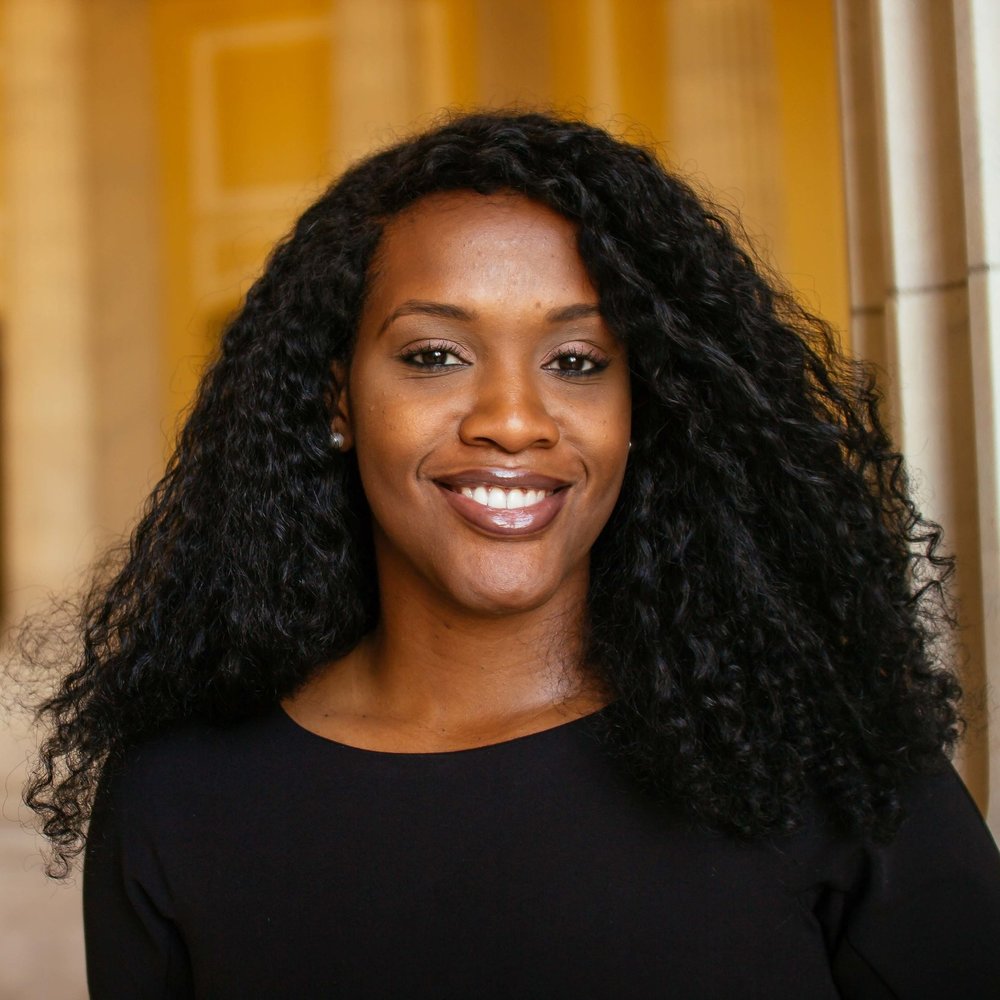 Biden appoints Nicole Tisdale as Director for Legislative Affairs for the National Security Council at the White House. Ms. Tisdale previously served over 10 years in the U.S. House of Representatives, most recently as the Director of Outreach and Coalitions for the Committee on Homeland Security. 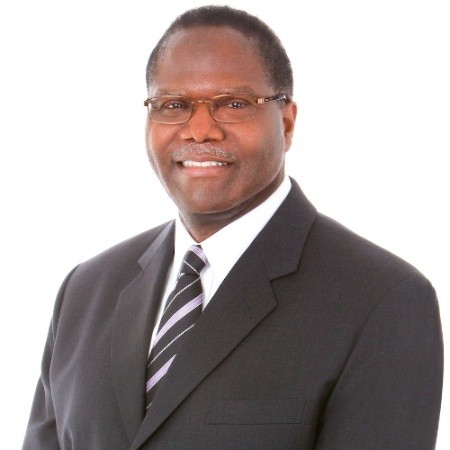 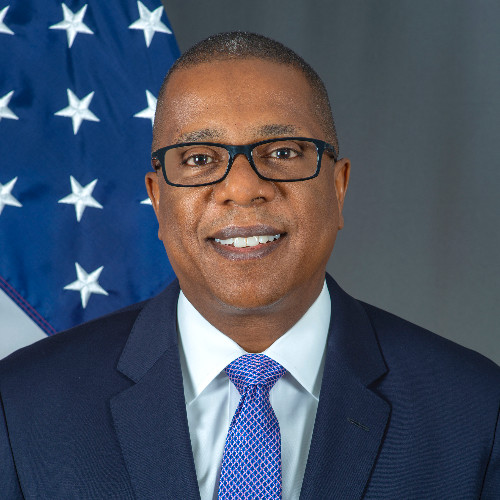 Biden nominates Brian A. Nichols for Assistant Secretary of State for Western Hemisphere Affairs at the Department of State. Mr. Nichols currently serves as the U.S. Ambassador to Zimbabwe. From 2014 to 2017, he served as the U.S. Ambassador to Perú. Mr. Nichols was awarded the 2016 Charles E. Cobb, Jr. Award for Initiative and Success in Trade Development, two Presidential Meritorious Service Awards, and 13 Senior Performance Awards.

Increase in jobs: Job growth for the month of March increased at the fastest rate since August 2020, with the overall unemployment rate falling to 6 percent. However, the unemployment rate for African Americans declined only slightly in March, to 9.6 percent. 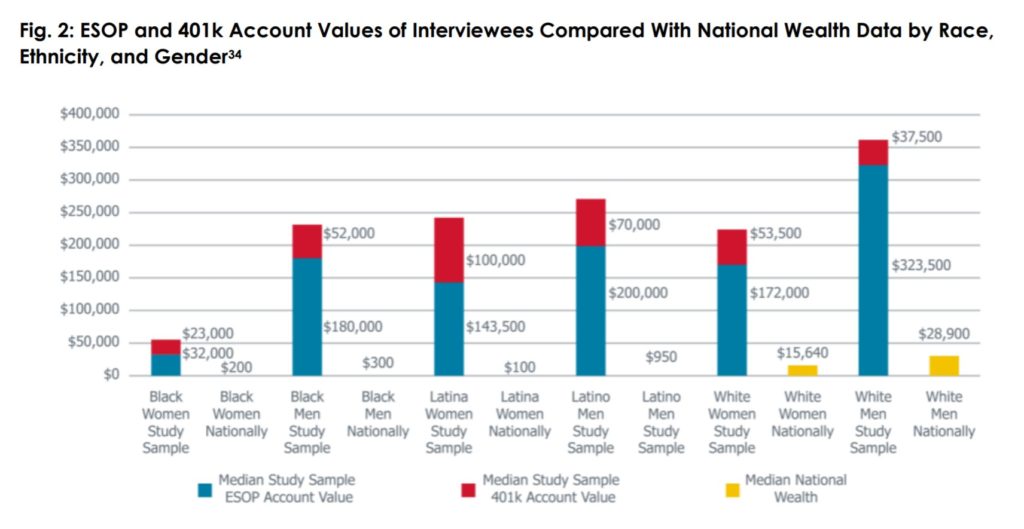 Employee-owned: Employee share ownership could be a means of closing the racial wealth divide, the Aspen Institute argues. (chart above)

PPP deadline extended, funding not: Payroll Protection Program funds are likely to run out in April, putting Black-owned businesses at risk for missing out on needed resources despite a May 31 PPP filing extension.

Don’t be fooled: Despite assurances otherwise, the actions of fossil fuel conglomerates have seldom benefited, and have more often done great harm to Black and other communities of color, an NAACP report reminds.

Broadband plans: The Biden infrastructure plan includes $100 billion for achieving universal access to broadband by 2030, with a goal of improving access and affordability in underserved urban and rural communities.

Closing racial digital inequities: The National Urban League launched a plan to create more broadband in communities where limited access to the digital economy is contributing to financial and educational inequality. The Lewis Latimer Plan for Digital Equity and Inclusion calls on the Department of Commerce and the Federal Communications Commission to deploy broadband networks to all Americans, as well assess private-sector companies’ success in increasing diversity, equity, and inclusion.

Section 230 and speech: The Justice Department sided with YouTube in a class action suit filed by four Black content creators who accuse YouTube of restricting and de-monetizing videos with tags such as “Black lives matter.” The creators allege that the platform had been systematically removing their content and engaging in “overt, intentional, and systematic racial discrimination.” The current debate on Section 230 has prompted many discussions about online censorship, discrimination, and voter suppression.

Overcoming algorithm bias: Congress heard from the CEOs of Facebook, Google, and Twitter on the role of social media in spreading extremism and disinformation. The impact of algorithms emerged as a major concern. Among other recommendations, legislators proposed requiring the tech companies to report data on diversity at all levels and to perform civil rights audits. Joint Center Director of Technology Policy, Dr. Dominique Harrison, shares her thoughts on the tech hearing in a blog on the Joint Center’s website.

Trillion dollar opportunity: While acknowledging the job creation potential of the nearly $2 trillion infrastructure investment plan and other initiatives, the Aspen Institute urges the Biden administration to focus on quality, not the quantity, of new jobs, especially for Black and other people of color. 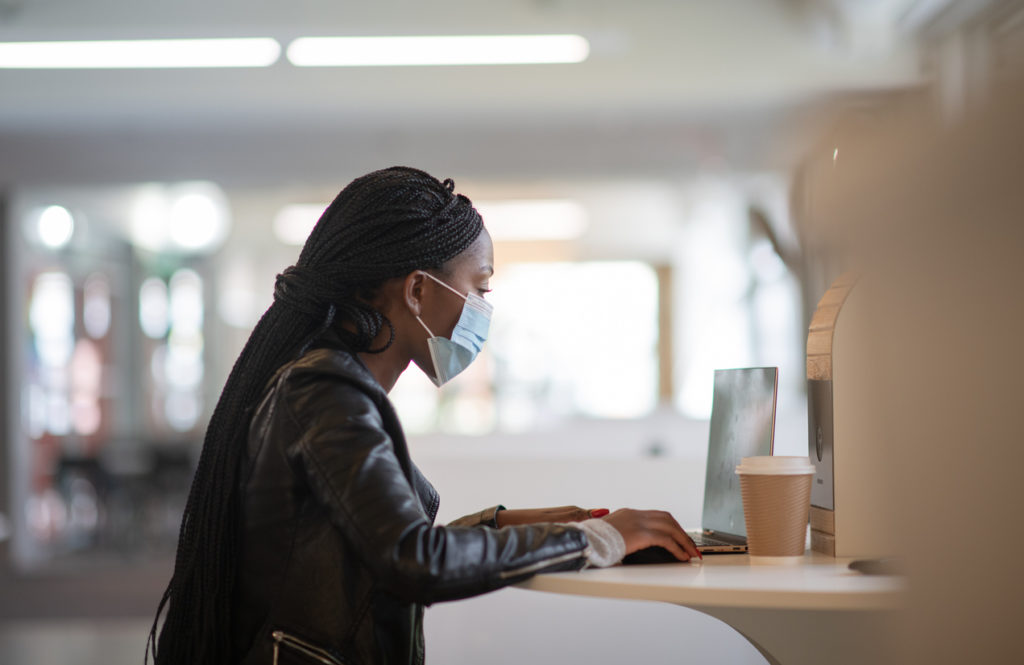 Improving health equity: Only 5 percent of vaccinations have gone to Black people, based on data from approximately half of the vaccinations given to date. The discrepancies, however, create an important opportunity to reduce disparities in access to quality health care, argue St. Luke’s Health CEO T. Douglas Lawson and Texas Southern University Interim President Kenneth Huewitt. The two institutions have formed a partnership to distribute vaccines on the Texas Southern University campus.

Targeting vaccines in Philly: Philadelphia is trying to reduce disparities in vaccination access by targeting neighborhoods hit hardest by COVID-19. The 16 ZIP codes with the lowest vaccination rates are also those with the most residents of color and high rates of coronavirus cases, hospitalizations, and deaths.

Vaccine data hub: Citing significant gaps in COVID-19 data, the Government Accountability Office recommends creating a centralized website for data from the CDC and other federal sources. Patients’ race and ethnicity are missing in nearly half the vaccination data collected by states, making it difficult to assess how well vaccination campaigns are reaching Black people.

Tracking top staff diversity of newly-elected Members: As of April 6, the Joint Center’s report card tracking top staff hires by each new Member in the 117th Congress illustrates that of the top staff hired by new Members, so far 24.6 percent are people of color, and 5.7 percent are African American. People of color account for 40 percent of the U.S. population and African Americans account for 13.4 percent of the U.S. Just over 99.1 percent (or 211 of 213) of the possible positions have already been filled. Alex Padilla (D-CA) continues to lead in the Senate and Marilyn Strickland (D-WA) continues to lead in the House for hiring diverse staff in comparison to the diversity of their districts or states. Sen. Mark Kelly (D-AZ) and Rep. Yvette Herrell (R-NM) are at the bottom of the lists.

Florida may follow Georgia: In a move seen as similar to the voting restrictions in Georgia, Florida is considering a law barring outside groups from providing food or water within 150 feet of polling locations. Black faith leaders in the state are among those who charge that the legislation is aimed at suppressing voters of color.

Black History Walks announces their film screening Coded Bias, a documentary that follows researcher Joy Buolamwini along with data scientists and mathematicians as “they fight to expose the discrimination within algorithms in employment, banking, insurance, dating, policing, and social media.”

Black to the Future Action Fund releases a COVID-19 vaccine resource page that includes information about each state’s vaccine roll out plan, where communities can receive a vaccination, and how to make an appointment. 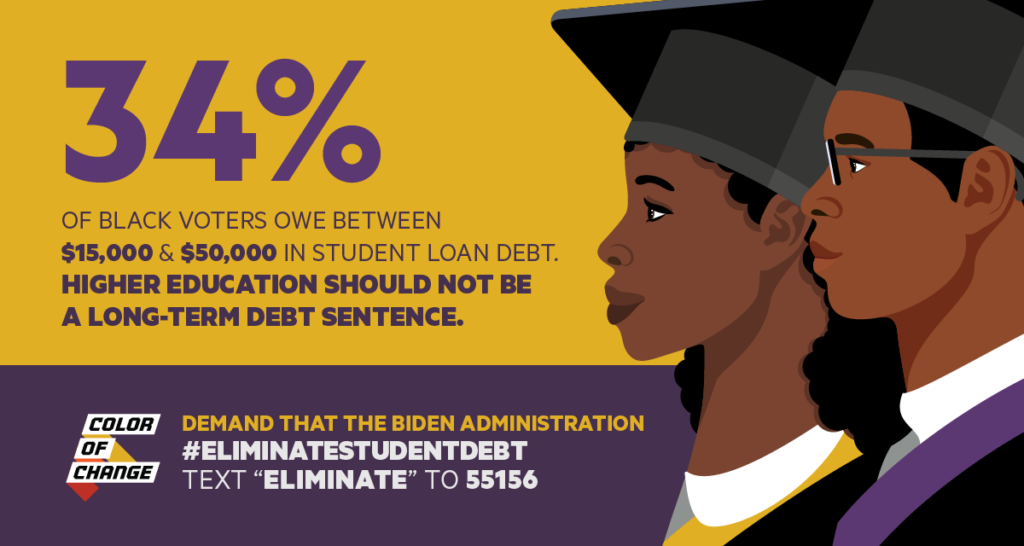 Inside HigherEd announces the publication of a compilation of articles that explore the Black experience in higher education including topics such as government funding and policies, faculty diversity, and curriculum and academic life.

What Do Today’s Kids Need for Tomorrow’s World? More Than Tech and Academics (EdSurge)

A Union Drive at Amazon (The New York Times)