House Speaker Nancy Pelosi said that the Trump Administration rejected the Democrats’ proposal that the two sides both compromise on a $2-$2.4 trillion package that is halfway between the original packages of the Republicans ($1 trillion) and the Democrats ($3.4 trillion). Senate Majority Leader Mitch McConnell argued that Democrats have “sabotaged backroom talks with absurd demands that would not help working people.”

Divisions within the GOP have also played a role in the inability to reach agreement.

In a report released last week—Pandemic Relief Priorities for Black Communities—the Joint Center called on Congress and the Administration to extend the $600 federal unemployment benefit, and provide funding for state and local governments, Community Development Financial Institutions and Minority Depository Institutions, an emergency broadband benefit for households, laptops and Wi-Fi hotspots for students, and other measures to support Black workers, Black businesses, and Black voters. Read the entire report here.

On Saturday, President Trump signed four executive orders intended to extend federal unemployment benefits, extend the moratorium on evictions, postpone payroll taxes, and defer student loan payments through the end of the year. Senate Minority Leader Chuck Schumer (D-NY) has called the efforts “unworkable, weak, and far too narrow.” In addition to questions of legality, the orders have received criticism about the inadequacy of benefits, the millions of renters left out of eviction relief, a hit to the Social Security and Medicare if President Trump waives postponed payroll tax payments, and the exclusion of several populations, such as states and localities, schools, and small business owners from much needed relief. 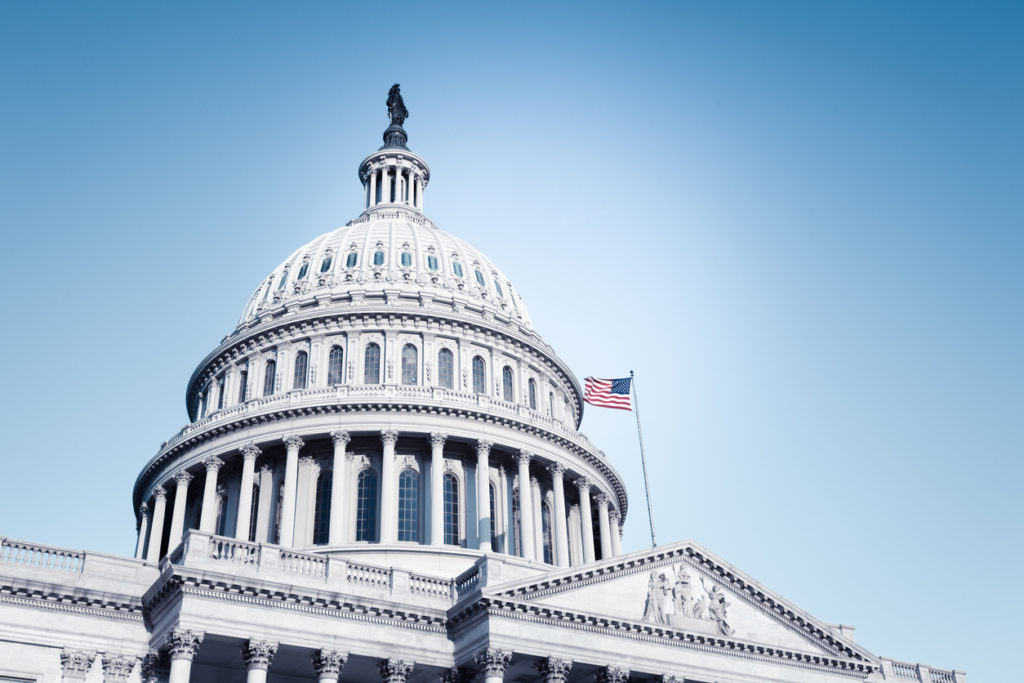 The Federal Reserve’s Main Street lending program continues to fall short in its mission to provide relief businesses that are too large to qualify for the paycheck protection program, but not large enough to receive funding through capital markets.

Hospitals that serve large Black populations were shortchanged in the distribution of $175 billion in federal funds, according to a study in the Journal of the American Medical Association. The systematic underfunding of hospitals in Black communities resulted from a CARES Act formula that allocated funding based on hospital revenue rather than numbers of COVID-19 cases.

Of the total $660 billion allocated as Paycheck Protection Program Funds, as of August 6, $523.4 billion in loans had been distributed and the average loan size was $101,459. 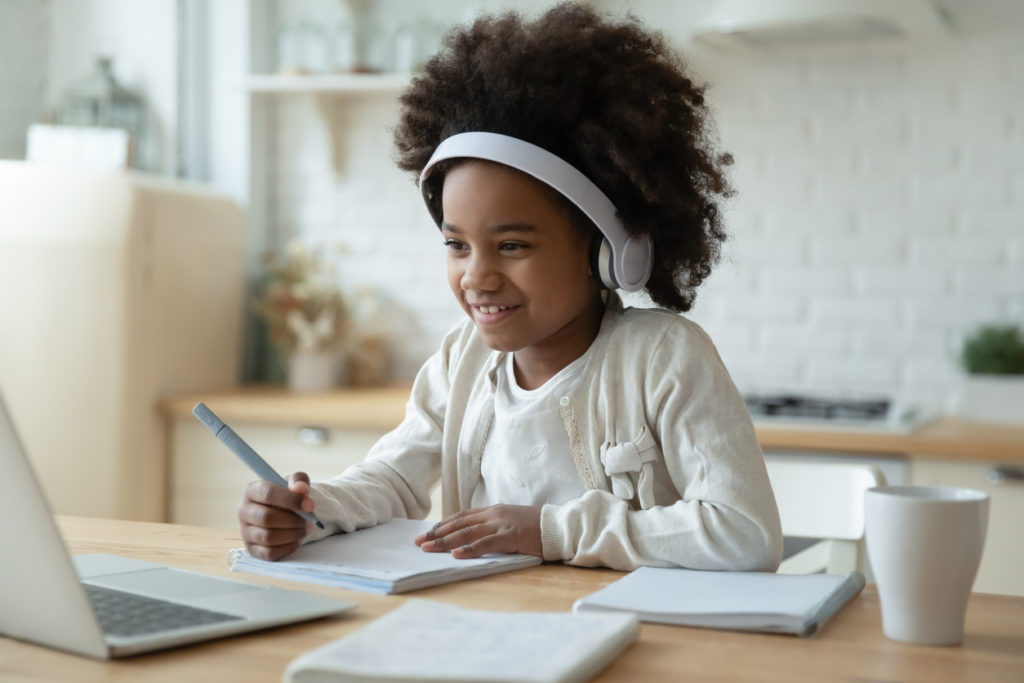 With school districts across the country beginning a new academic year, integrating online and distance learning options and expanding access to high-speed broadband internet for students should be a priority (as our Joint Center stimulus report stated, over 30% of Black households with one or more children lack high-speed internet). That urgency is amplified by a December 30 deadline for broadband projects to be completed and operational in order to be eligible for pandemic relief funding provided for by the CARES Act.

Last week, AT&T announced a partnership with the City of San Jose, CA, to provide 11,000 hotspots to students and households without home internet access (a study revealed that nearly 100,000 mostly Black and Latino households had no such access). 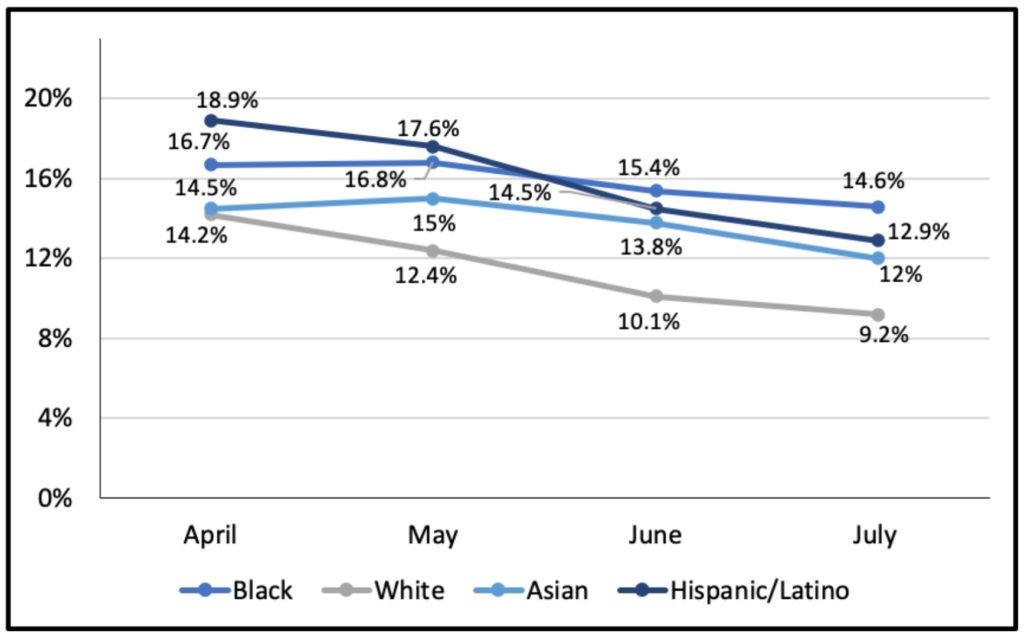 Weekly unemployment claims totaled 1.186 million for the week ending August 1, marking the 20th week that claims have remained above one million and exceeded the previous single-week record high of 695,000 claims in 1982.

Nonfarm payrolls increased by 1.763 million in July, bringing the three-month (May, June, July) employment gain to 9.3 million. Total employment is still 12.9 million lower than February. Economic Policy Institute Policy Director Heidi Sheirholz emphasized that “[t]here are 14 million more unemployed workers than job openings, meaning millions will remain jobless no matter what they do.” The deepening of the coronavirus-related recession is fueling concerns that an increasing number of job losses will become permanent.

The Groundwork Collaborative and the National Employment Law Project found that even with the extra weekly $600 federal unemployment benefit, a majority of the people who claim jobless benefits are likely receiving less on unemployment insurance than they did at their previous jobs when you factor in non-wage compensation such as health benefits, retirement earnings, and paid-time off. 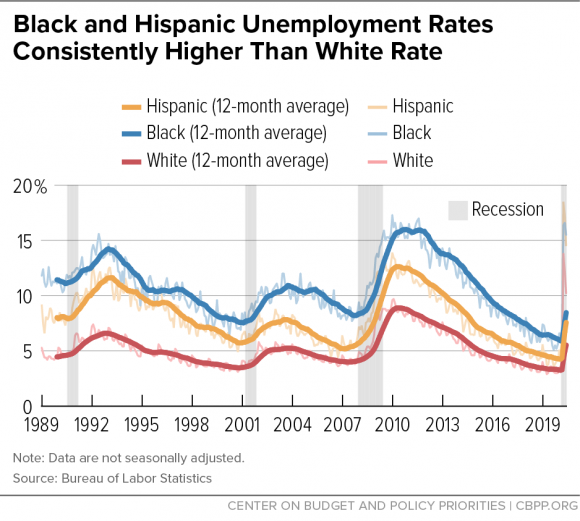 The Center on Budget and Policy Priorities urged Congress to mitigate racial and ethnic unemployment disparities, noting that “[i]f the recovery from this recession follows the historical pattern, Black unemployment in particular will remain staggeringly high longer and come down more slowly than White unemployment.”

The Federal Reserve Bank of New York issued a report that showed that Black-owned businesses are disproportionately located in geographic areas hardest hit by COVID-19. Forty percent of receipts from Black-owned businesses come from just 30 counties (about one percent of all counties), and two-thirds (19 or 3) of these counties “are areas with the highest numbers of COVID-19 cases.” 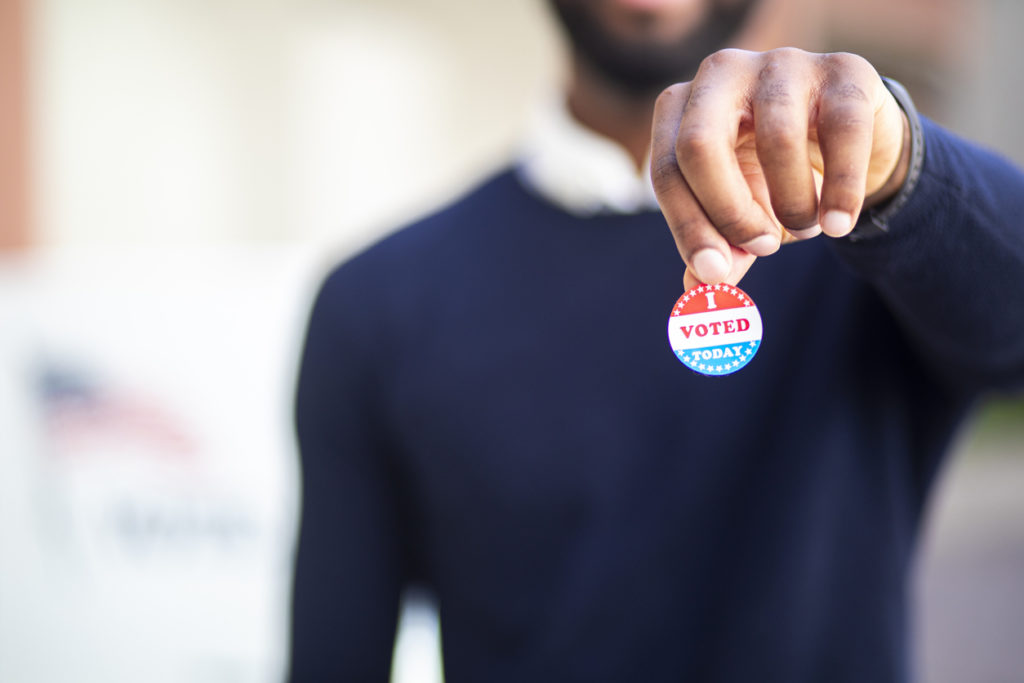 BET is joining with the National Urban League (NUL) and several other civil rights organizations to organize a National Black Voter Day on September 18 to “aid Black citizens against voter suppression tactics and ensure that their vote counts in the various elections taking place in November.”

The American Civil Liberties Union (ACLU), ACLU of Florida, NAACP Legal Defense and Educational Fund, Inc., and Brennan Center for Justice at NYU Law are among the groups appealing a Florida law that requires residents with past felony convictions to pay all outstanding legal financial obligations before being able to vote.

Voting rights advocates raised concerns over the U.S. Postal Service postmaster general Louis DeJoy implementing changes that include not paying overtime to mail carriers and clerks. These changes have resulted in reports of delays in mail service. Democracy Initiative Executive Director Wendy Fields responded, “we have an underfunded state and local election system and a deliberate slowdown in the Postal Service” and that the president is “deliberately orchestrating suppression and using the post office as a tool to do it.”

President and CEO of the NAACP Derrick Johnson penned an opinion piece in Politico urging  Congress to allocate $3.6 billion to ensure safe voter participation, and for states to offer alternative methods for voting. He maintained that “[g]iven the history and significance of in-person voting to the Black community, it is essential that in-person voting be expanded to ensure voter safety.”

Demos reported on the BREATHE Act, which was developed by the Movement for Black Lives Electoral Justice Project to enhance police accountability, disclose police abuses, require independent reviews of the use of force, and address historical and systemic discrimination.

The Center for American Progress urged Congress to address water access and affordability beyond a one-time coronavirus stimulus, noting that “insufficient water and sanitation services are most prevalent among the same populations with the highest infection and fatality rates from the virus—namely, those in low-income communities, tribal communities, and communities of color.”

“More than 70 percent of students attending HBCUs are low-income, compared to 35 to 40 percent nationally,” according to MSN. The pandemic “played a major role in basically magnifying the inequities” between HBCUs and traditional colleges but also showed how HBCUs “can adjust and adapt,” according to Thurgood Marshall College Fund President Harry Williams.

AARP, Main Street America, the United States Hispanic Chamber of Commerce, Public Private Strategies, and the Association of Women Business Centers are hosting “a series of four conversations on the future of small business in America.”

Alternatives for Girls hosted a grocery giveaway in Detroit.

Center for Black Women’s Wellness is scheduling appointments for free mammogram screenings despite the closure of their clinic due to COVID-19.

Color of Change issued a petition demanding corporations to move beyond their statements of support for Black people to actionable changes in leadership, payroll, and internal operations for Black employees, families, and communities.

The Leadership Conference on Civil and Human Rights, NAACP, American Association of People with Disabilities, the Georgia Coalition for the People’s Agenda, Representative Terri Sewell (D-AL), and California Secretary of State Alex Padilla hosted a press briefing call to outline the need for election funding in the next COVID-19 relief package for voter protection in the general election.

Strategic Concepts in Organizing and Policy Education (SCOPE) issued a petition to California state officials demanding the passing of #AB1253, a tax on California billionaires who have seen their wealth increase since the beginning of COVID-19.

The Brawl Over Back to School (Politico)

The Joint Center thanks the Annie E. Casey Foundation, the Boulé Foundation, the Democracy Fund, UPS, and the Walmart Foundation for additional support that has allowed us to do some of our COVID-19 and Black Communities work.