With the expanded $600 per week federal unemployment benefit set to expire at the end of this month and the White House open to compromise on the issue, Democrats and Republicans return to Washington this week and continue to debate over whether and how to extend jobless relief. The hope is to have an agreement and vote by August 7, 2020, when the Senate goes on recess until September 8 (see timetable here).

In May, House Democrats passed the $3 trillion HEROES Act, which if signed into law would extend the federal $600 per week unemployment benefit through January 2021, and provide resources for state and local governments, housing, testing and contact tracing, Community Development Financial Institutions, elections, the U.S. Postal Service, and more.

Senate Democrats introduced a proposal calling for $350 billion in coronavirus relief for communities of color disproportionately impacted by the pandemic. The legislation would provide funds for child care, job training, community health services, and infrastructure.

Localities across the country are also pushing for direct and more flexible federal payments to help balance county and city budgets, which have been hit hard by a drop in local tax revenues.

Last week Sen. Kamala Harris (D-CA) announced new legislation to protect renters and homeowners reeling from the economic fallout of the COVID-19 pandemic. The Rent Emergencies Leave Impacts on Evicted Families (RELIEF) Act calls for banning evictions and foreclosures for a year, protecting tenant access to utility services, and preventing negative credit reporting, among other measures. Joint Center analysis of U.S. Census Household Pulse Survey Data for the week of July 2-July 7 revealed that nearly 2.4 million Black homeowners and over 5.3 million Black renters had slight or no confidence in their ability to make next month’s payment.

Last week, U.S. Treasury Secretary Steven Mnuchin called on legislators to consider forgiving all “small” Paycheck Protection Program loans while speaking before the House Small Business Committee. Earlier this month, a coalition of more than 130 business groups and associations sent a letter to legislators calling for all PPP loans of less than $150,000 to be converted to grants.

Of the total $660 billion allocated as Paycheck Protection Program Funds, as of July 19, $518.3 billion in loans had been distributed and the average loan size was $104,682. The deadline to apply for a PPP loan is August 8. 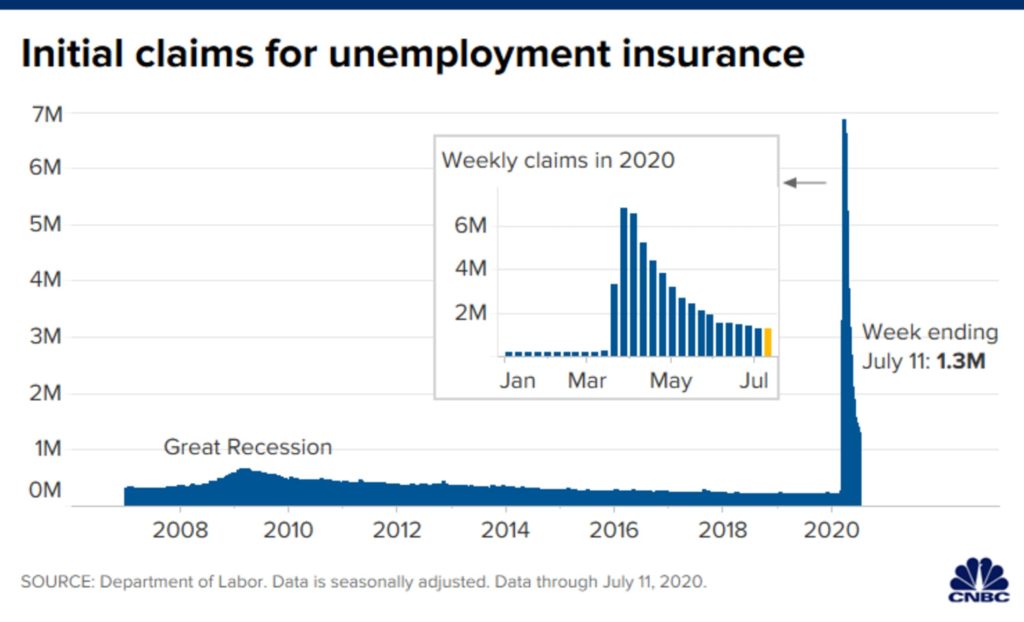 Another 1.3 million people filed for unemployment for the week ending July 11, bringing the total number of initial claims filed during the COVID-19 crisis to 51 million since the peak in late March. This is the 17th week that claims have remained above 1 million, significantly higher than the previous one-week record high of 695,000 in 1982.

Joint Center Vice President Jessica Fulton was quoted in a ProPublica analysis saying, “[t]he Black unemployment rate is always ridiculously high, but we don’t treat it like a crisis.” The analysis puts COVID unemployment rates into a historical context with a look at unemployment across race, gender, age, education, and income.

The California Budget & Policy Center analysis of U.S. Census Bureau data from February to May 2020 found that the number of Black and Latina women working in California has declined by 23 and 22%  respectively, while white women have experienced a 10% decline.

Noting that coronavirus one-time stimulus payments and expanded unemployment benefits prevented the growth of income and poverty gaps between Black and Latino households and white households during the current crisis, the Center on Budget and Policy Priorities urged Congress to extend and strengthen stimulus measures in order to protect families and the economy.  In a recent policy brief, the Center for Law and Social Policy (CLASP) identified urgent actions the for the Senate to take to help low-income individuals and households, including investing in childcare, workforce development programs for formerly incarcerated individuals, and Historically Black Colleges and Universities (HBCUs) and other minority-serving institutions. 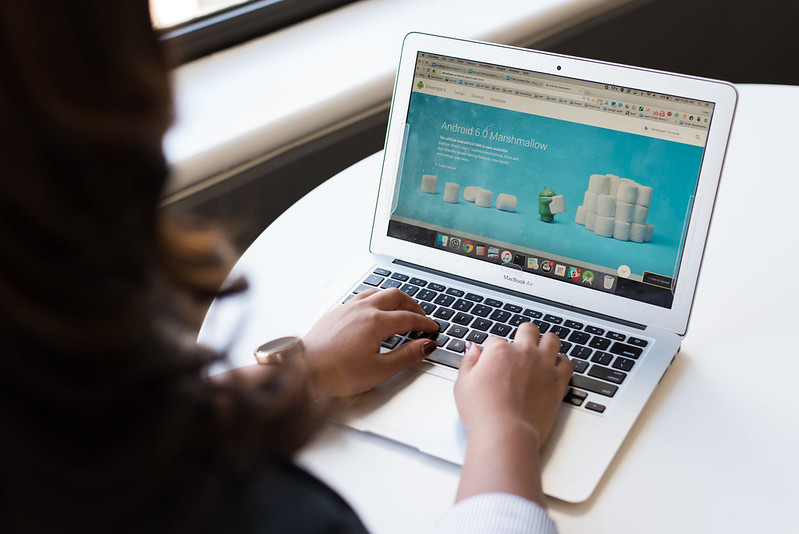 A new National Community Reinvestment Coalition study found that white applicants were treated more favorably than Black applicants with slightly better qualifications when applying for a Paycheck Protection Program Loan. The New York Times reports that “The Black borrowers were offered different products and treated significantly worse by employees than white borrowers were in 43 percent of the tests.”

Reviewing many of the recent studies, National Geographic reports that “[m]ore than half of Black-owned businesses may not survive COVID-19.”

Lauren Bauer of The Hamilton Project advocates for Congress to expand  COVID-19 food programs, including the Supplemental Nutrition Assistance Program (SNAP), SNAP Emergency Allotments, and Pandemic-EBT (P-EBT). According to The Hamilton Project, “[a]bout three in ten Black households with children and one in four Hispanic households with children did not have sufficient food due to a lack of resources in June 2020, while white households with children reported a child food insecurity rate just under 10 percent.” The Center for Digital Democracy explores the drawbacks and benefits to online shopping by SNAP participants, a practice that has accelerated during the COVID-19 pandemic.

Last week’s primary elections saw more long lines and low voter turnout. Regarding Alabama’s record number of absentee ballot requests and low voter turnout, the NAACP Legal Defense Fund is calling on local elected officials to provide protective equipment to poll workers and facilitate access to absentee ballots without “draconian voter ID and witness requirements” in future elections. The New York Times reports that one voter waited for six hours to vote at Texas Southern University, a historically Black university.  Carol Anderson, Professor of African American Studies at Emory University, stated that long lines are “deliberate, because they deal with the allocation of resources” and “oftentimes a deliberate deployment of not enough resources in minority communities.” 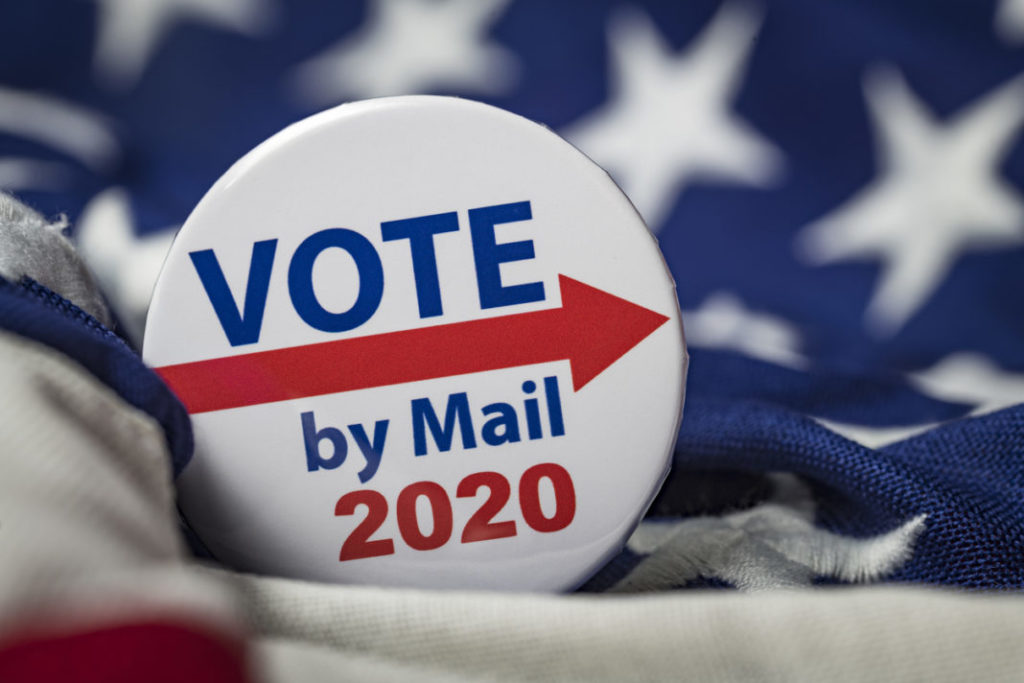 While most states have expanded opportunities to vote-by-mail in light of the pandemic, some states (e.g., Texas) continue to fight against expanding vote-by-mail efforts. Former President Barack Obama is encouraging that absentee ballots be made available for everyone, tweeting “voting by mail shouldn’t be a partisan issue—especially during a pandemic. Everybody should be able to request an absentee ballot, and make their voice heard in every election.”

NPR reported that at least 65,000 absentee or mail-in ballots from several states have been rejected due to ballots arriving after the deadline, often due to no fault of the voter. Tens of thousands of other ballots were discarded this year for a number of other reasons, but most often because of a missing signature or signature matching issues. Charles Stewart, Professor of Political Science at MIT, told NPR that those who use vote-by-mail for the first time — especially young, Black and Latino voters — are more likely to have their ballots rejected, which draws concerns for the November election.

Facebook is coming under fire for promoting false or misleading voter fraud posts and ads, according to an analysis  by ProPublica and First Draft, which states that “nearly half of all top-performing posts that mentioned voting by mail were false or misleading.” Brandi Collins-Dexter, Senior Campaign Director at Color of Change told ProPublica that “there is already a sense in the Black community that our votes will be lost and that the election won’t be fair.” Collins-Dexter continued “what this stuff does is just confuse people and sow distrust.”

In a recent vote-from-home readiness scorecard study, Brookings found that polling location closures were high in cities with large Black populations (e.g. Atlanta, Savannah, Louisville, and Milwaukee). The researchers graded states on the ease of vote-by-mail in all 50 states and the District of Columbia.

Joint Center Board Members Paul Thornell and Robert Raben, along with co-founder of Inclusive America co-founder Mark Hanis, are advocating for more diversity on the five-person Congressional Oversight Commission, which was established to provide oversight of the $500 billion CARES Act. The commission has already selected four of the five members, but none of them are African-American, Latino, Pacific Islander, or American Indian, all groups hit hard by the COVID-19 pandemic.

Drawing concerns about transparency, access, and accuracy of COVID-19 data, the Trump administration announced last week ordered hospitals to submit COVID-19 data to the U.S. Department of Health and Human Services instead of the Centers for Disease Control and Prevention (CDC). While health experts acknowledged that CDC’s data collection could be improved, many fear the Administration’s removal of the data from experts politicizes data collection and management.

On a separate note, a letter signed by more than 1,200 employees at the CDC stated that there is “widespread acts of racism and discrimination within CDC.”

A Washington Post poll found that 32% of Black adults said they would definitely get a coronavirus vaccine, compared to 45% of white and Latino adults. The Post reported that the Tuskegee syphilis study and other discriminatory practices in medicine may cause skepticism of vaccines by some in Black communities. Melinda Gates has suggested that Black communities should enjoy early access to a vaccine, while American Public Health Association Executive Director Georges Benjamin asserted that prioritizing Black communities could be stigmatizing.

In Michigan, a Black teen was incarcerated for violating her probation by not completing her online coursework when her school switched to online learning.  Advocates argue that the case goes against recommendations to provide leniency and prioritize children’s health and safety amid the pandemic. The incident occurred in a jurisdiction that has a disproportionate share of Black youth in the juvenile detention system.

As the debate on whether students should return to the classroom intensifies, surveys found that 65% of teachers worldwide were unprepared to facilitate distance teaching amidst a global pandemic, and that 43% of Hispanic students and 42% of African American students don’t have a computer at home. Former Joint Center Workforce Policy Director Harin Contractor penned a column in the Detroit News identifying the inequities in education, and possible solutions such as: “understanding the technology, updating curricula, in-home supervision especially in single-parent households, literacy and a range of other baked-in sociological factors.”

First Focus, Children’s Defense Fund, and the Coalition on Human Needs are teaming up with other national organizations from July 13 to July 24 to discuss significant investments for children and families in the next COVID-19 relief package.

National Domestic Workers Alliance issued a petition urging Senators to pass the HEROES Act and support the protection of domestic workers who have been hit hardest by COVID-19.

The Advancement Project issued a petition to Congress calling on their support of the establishment of a #NationalRightToVote that establishes uniform national voting standards, aids greater legal protection for the right to vote, requires the government to facilitate voter participation of all people, and affirms humanity and dignity of all.

The NAACP partnered with BeyGOOD’s Black-Owned Small Business Impact Fund to help sustain Black small business communities in select cities that have been directly impacted by the pandemic and recent uprisings in the nation.