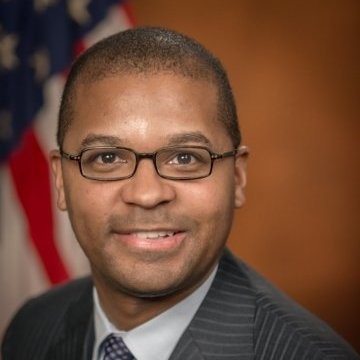 WASHINGTON, Wednesday, June 20, 2018 – The Joint Center for Political and Economic Studies today urged the U.S. Senate to swiftly confirm Geoffrey Starks as the next FCC Commissioner. Starks, a Democrat, was nominated by President Trump on June 1 to fill the Federal Communications Commission role recently vacated by Mignon Clyburn. Today, Starks testified before the Senate Committee on Commerce, Science, and Transportation during his nominations hearing. Senate Minority Leader Charles Schumer supported the nomination of Starks.

In February, the Joint Center encouraged Senator Schumer to back the nomination of Starks, noting his professional qualifications and experience. In a letter to Schumer, the Joint Center noted that diversity of senior leadership at the FCC—and all U.S. independent agencies—is necessary to ensure that all voices and backgrounds are included in critical policy conversations.

Since 2015, Starks has served as the assistant bureau chief of the FCC’s enforcement bureau. In that role he conducts investigations under federal communications laws, advises on important legal matters, and sits on the Universal Service Fund Council, a body that coordinates issues around services for low-income and rural Americans. Before his work in the enforcement bureau of the FCC, President Obama appointed Starks as senior counsel in the Department of Justice (DOJ), where he was responsible for advising the Deputy Attorney General on issues around healthcare, financial fraud, civil, criminal, cyber, and national security matters. In recognition of his work there, Starks earned the Attorney General Award for Exceptional Service, the highest honor a DOJ employee can receive. Starks earned a bachelor’s degree from Harvard University, graduating magna cum laude. He earned his juris doctor from Yale Law School.

If confirmed, Starks will be the only Black member of the five-seat commission and will serve the remainder of a five-year term that ends on June 30, 2022.

Quotes from Joint Center Leadership Spencer Overton, President, Joint Center: “Geoffrey Starks has an exceptional professional background that he has developed both inside and outside of the FCC, and he is uniquely qualified for the role of Commissioner. He will offer a critical and unique perspective to the Commission that will ensure the FCC operates in a way that includes all Americans. We are thankful to Senator Schumer for hearing our call and supporting Geoffrey’s nomination. We urge the Senate to confirm him as a Commissioner.”

Don Bell, Director, Black Talent Initiative: “With Mignon Clyburn’s departure after a tenure of tremendous service, it is vital that the Senate confirm a thoughtful individual committed to the FCC’s mission. Geoffrey Starks is that person. Our government, from Congress to agencies like the FCC, cannot make informed decisions that benefit all Americans if its most senior leadership does not reflect the whole of our country. As his years of service show,Geoffrey Starks is eminently qualified to serve as FCC Commissioner.We hope that he is quickly confirmed by the Senate on a bipartisan basis.”

For press inquires, please contact press@jointcenter.org
The Joint Center for Political and Economic Studies, founded in 1970, is a think tank that produces data, analysis, and ideas to solve challenges that confront the African American community. The Joint Center collaborates with top experts, various organizations, and others that value racial inclusion to maximize our impact. We are currently focused on the future of work in African American communities and congressional staff diversity.