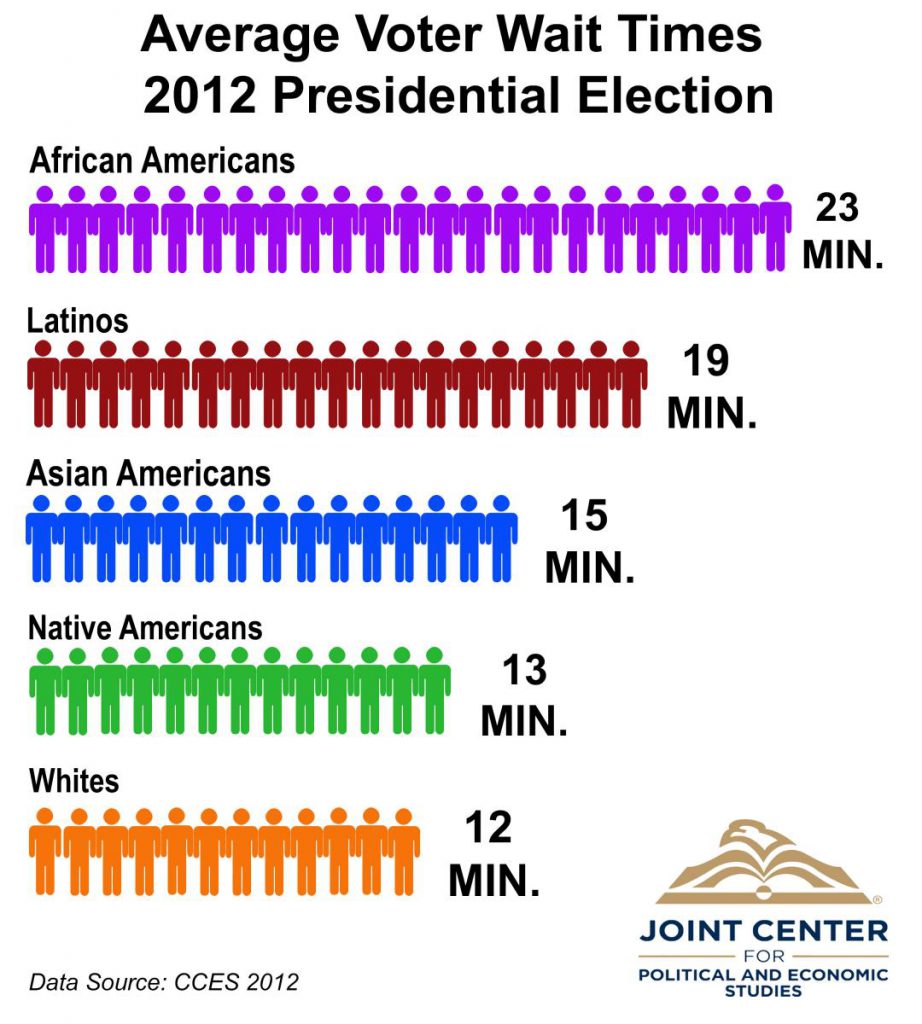 Wait times to vote are longer for people of color. In November 2012, some polling places in communities of color had wait times of up to 7 hours. Nationwide, average wait times to vote were 12 minutes for white voters, 13 minutes for Native Americans, 15 minutes for Asian Americans, 19 minutes for Latinos, and 23 minutes for African Americans.1
Long lines reduce turnout. One study estimated that long lines deterred at least 730,000 Americans from voting in November 2012, which averages to over 14,000 voters deterred per state. (By comparison, only 537 Florida votes determined the 2000 presidential election.)2 Long lines in just one county can reduce overall turnout and determine outcomes in federal, state, and local elections. 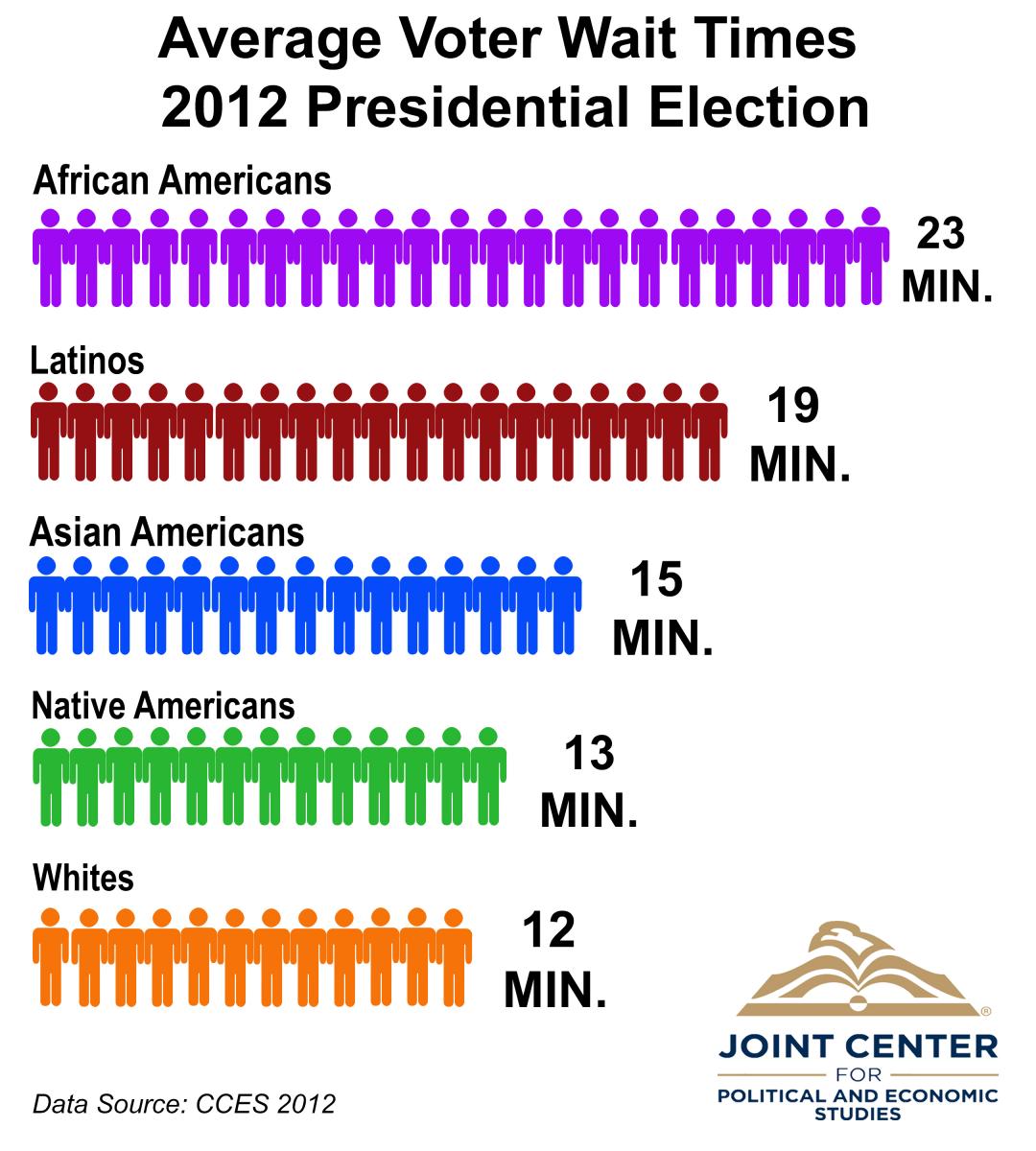 Long lines cost Americans time and money. In November 2012, Americans waited 23 million hours in line to vote.3Voting lines also cost Americans productivity and wages estimated at $544 million.4
City, county, and state officials can reduce wait times. In 2012, New Jersey wait times averaged only about 6 minutes, while Florida wait times averaged 42 minutes. Within Florida, the county with the highest percentage of people of color (Miami-Dade, at 85%) had voting wait times after polls closed that averaged 73 minutes, while the county with the lowest percentage of people of color (Citrus, at 11%) had no lines when polls closed. 5 City, county, and state legislators and executives—as well as election officials—have key roles to play in reducing wait times. While various factors contribute to long lines, the most common causes and recommendations are listed below. For more details, see the “Key Resources” section below. Common Causes of Long Lines
Lack of poll workers and voting machines: Long lines result from “a mismatch between the number of voters who show up and the resources available to accommodate them.6 A report on the November 2012 election found that in three of the states with the longest wait times—Florida, South Carolina and Maryland—polling places with fewer machines and/or fewer poll workers had longer lines and tended to serve more voters of color.7Outdated voting machines that crash also lengthen lines.
Errors in voter rolls: A Pew study found that one in eight registration records is invalid or has serious errors.8 Errors in voter rolls prevent election administrators from accurately estimating the number of voters who will show up at particular polling places and cause delays when poll workers are unable to locate voters’ information on Election Day.9 Cuts to early voting: Black and Latino voters are more likely to utilize early in-person voting than white voters are.10 In the past 13 years, the percentage of voters casting ballots at early voting sites increased nearly fivefold.11 That trend slowed in 2011, however, when several states cut the number of early voting days.12 Florida, for example, reduced the number of early in-person voting days from 14 to 8.13 Several Florida polling places with large populations of color experienced wait times of up to 7 hours both before and on Election Day.14

Set and enforce minimum standards. States, counties, and cities should adopt and enforce minimum standards for both wait times (e.g., no voter will wait for more than 30 minutes to cast a ballot)15 and resource allocation (e.g., at least one functional voting machine for every 250 registered voters).16 Resource allocation standards alone are insufficient because they may overlook local differences that cause long lines. For example, even though two counties may have the same number of machines and poll workers per voter, a county with a six-page ballot featuring several detailed local initiative questions may have much longer lines than a county with a one-page ballot.17

Collect data to identify bottlenecks and monitor voter flow. States, counties, and cities should require that election administrators institute practices to gather the data needed to better manage the capacity of polling places, and should provide resources to do so. Grocery stores, amusement parks, and other public venues manage wait times with a science called “queuing theory,” which can also be applied to elections. At each polling place, election officials should collect data on various factors, such as the rate at which voters arrive, the number of check-in stations and staff available to receive voters, how quickly voters are checked in, the number of voting machines, and the time it takes most voters to complete a ballot.19 By collecting such data, election officials can predict where and when congestion is most likely to form. The data will help election officials decide how to allocate voting machines, poll workers, and other resources, as well as help municipal and county election officials more effectively advocate for additional resources.20 To help collect the data, election administrators should purchase election systems with built-in, user-friendly data-capturing capabilities, and push vendors to improve data-capturing capabilities.

Michael C. Herron & Daniel A. Smith, Congestion at the Polls: A Study of Florida Precincts in the 2012 General Election, Advancement Project (2013) (showing that Florida precincts with greater proportions of voters of color had disproportionately long wait times in November 2012).

*Spencer Overton is the Joint Center’s President and Jenalyn Sotto is the Joint Center’s Senior Policy Analyst. The authors thank Lawrence Norden, Charles Stewart III, and Venable LLP for reviewing and providing helpful feedback on earlier drafts of this policy brief. The authors also thank Morgan Butler for producing this 2-minute companion video, and The Raben Group for feedback on earlier versions of the video. Further, the authors appreciate the Democracy Fund, the Hewlett Foundation, the Joyce Foundation, and NEO Philanthropy for their support of the Joint Center’s democracy and governance work.

17. See, e.g., Norden, supra note 9, at 6.  But see Chris Famighetti, Amanda Melillo, & Myrna Perez, Election Day Long Lines: Resource Allocation, Brennan Ctr. for Justice 1 (2014) (remaining agnostic on the choice between maximum wait time versus resource allocation standards, but observing that machine and poll worker variations in Florida (which has no standards) were greater than in South Carolina and Maryland (which have resource allocation standards).