Last week, the Washington Post published the Joint Center’s op-ed calling on the CDC to release racial data on COVID-19 deaths, and the Administration acknowledged that the coronavirus is hitting Black communities particularly hard. Survey data showed that 45% of Black voters have lost their job, been put on leave, or had hours reduced due to COVID-19. Also, a court mandate to vote in person in Wisconsin risked Black lives. The question remains whether Congress’s next COVID-19 stimulus legislation will target medical and economic resources to Black communities and others most affected by the coronavirus.

The Push to Release Racial Data on COVID-19 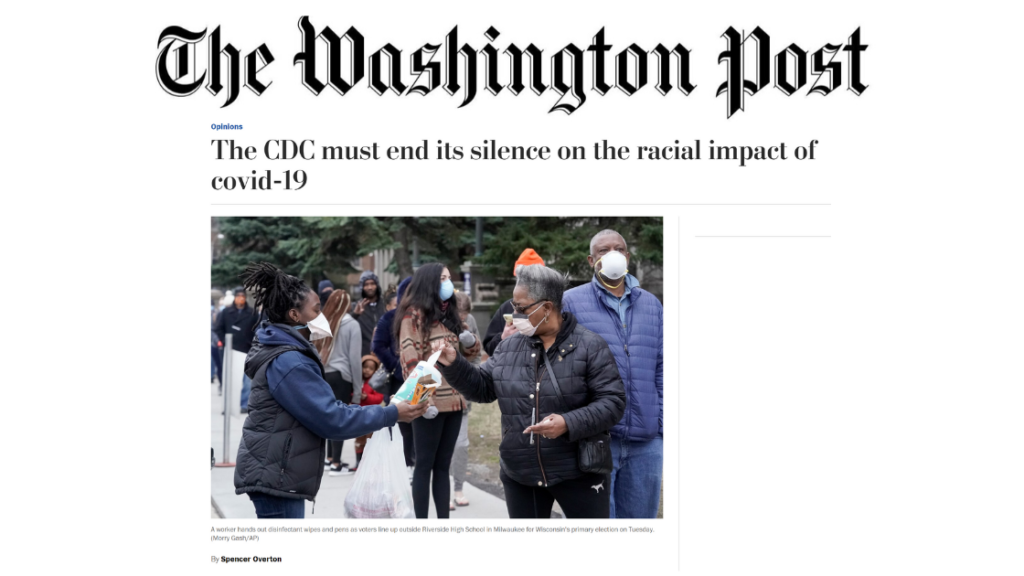 Following up on letters from the NAACP, the African American Mayors Association, and a few Members of Congress, this past Tuesday the Washington Post published Joint Center President Spencer Overton’s op-ed explaining why federal, state, and local governments should disclose COVID-19 cases, testing, and deaths by race to contain the spread of the coronavirus and save lives.

States and localities like Chicago, the District of Columbia, Louisiana, Milwaukee County, and North Carolina already disclose racial data on COVID-19 cases and deaths. Spencer’s perspectives were cited in the Wall Street Journal, CNN, ABC News, and several other outlets.

Several speculated on why COVID-19 is hitting Black communities particularly hard, including the ACLU, Brookings’ Rashawn Ray, CNN, Demos, The Economist, Groundwork Collaborative’s Angela Hanks and Roosevelt Institute’s Kendra Bozarth, National Black Justice Coalition’s David Johns on NPR & PBS (NBJC also released this brief on lessons from the AIDS Crisis), Urban Institute’s Kilolo Kijakazi, and U.S. News and World Report. NPR reported on a study that shows that “doctors may be less likely to refer African Americans for testing when they show up for care with signs of infection.”

In response, President Trump tasked the CDC to do a deep analysis to get a full understanding of how COVID-19 is impacting people of color. On Wednesday, the CDC released data from 14 states (10% of the U.S. population) of 580 hospitalized patients whose race was charted showing 33% were Black (see the report here, and coverage in NPR and STAT). The CDC is continuing to collect data from traditional health programs (Medicaid and Medicare) and death certificates, and they have launched a nationwide surveillance system by race (and other factors). On Friday, Vice President Pence and CDC Director Robert Redfield held a White House conference call with African American Leaders, and Redfield advised African Americans to follow the White House coronavirus guidelines. The Lawyers’ Committee for Civil Rights Under Law responded, calling the White House call “woefully inadequate” and the Administration’s response to the crisis “anemic.”

The Need for a Fourth COVID-19 Stimulus

NPR reports that 16.8 million people have filed for unemployment in the past three weeks (a historic record), and a Data for Progress survey conducted April 5-6 reports that 45% of Black voters and 33% of all voters have lost their job, been put on leave, or had hours reduced due to the coronavirus pandemic.

In light of continuing economic challenges, on April 20 the House and Senate are scheduled to return to DC and are expected to debate and possibly pass a fourth COVID-19 stimulus package. With only seven days before Members return, we expect that this week Members will begin informal negotiations across party lines, particularly between committee Chairs and Ranking Members.

Rather than push for broader infrastructure investments (e.g., expanding broadband so all students can engage in online learning—see below), early reports suggest the fourth stimulus will focus on financial support for small businesses and families. Additional resources could be included for medical care, stopping the spread of the virus, and expanded vote-by-mail (see below). Amid outbreaks in correctional facilities and local jails, Senator Cory Booker (D-NJ) hopes to include provisions to incentivize localities, states, and the federal Bureau of Prisons to reduce their jail and prison populations.

Charles Blow of the New York Times argues that policymakers should direct resources to fight coronavirus in largely Black cities because they are most severely affected.

For recent commentary on the fourth stimulus, see the Washington Post and POLITICO.

On April 8, Dr. Nicol Turner-Lee also hosted this Brookings webinar on “What’s being done to address the growing US digital divide.” On April 16, Technology Policy Institute will host a webinar on Internet Access and Inequality During Pandemic, and on April 16, MediaJustice will host a #Right2Connect Townhall.

The New York Times reminds us that social distancing is a privilege, and fewer than one in five African Americans have the opportunity to work from home.

In light of COVID-19 and the need to self-isolate, Color of Change released a petition calling for universal basic income.

Marketplace reports that Black-owned businesses face increased safety and economic risks from COVID-19, and New America Indianapolis and The Indianapolis Recorder hosted an online conversation on how Black businesses can “weather the COVID storm.”

House Financial Services Chair Congresswoman Maxine Waters (D-CA) signed this letter to the Comptroller of the Currency and the Chair of the Federal Deposit Insurance Corporation (FDIC) “urging them to prioritize a strong response to the COVID-19 pandemic and suspend efforts to revise the Community Reinvestment Act (CRA) and any unrelated rulemakings.”

The Lawyers’ Committee led over 50 civil rights and workers’ rights organizations in sending a letter to the U.S. Department of Labor’s Office of Federal Contract Compliance Programs (OFCCP) “to oppose the Department’s decision to temporarily exempt and waive affirmative action obligations under new supply, service, and construction federal contracts for coronavirus relief.”

The court mandate to vote in person in Wisconsin last week risked the lives of voters, and many have discussed including funding for vote-by-mail and election administration generally in the fourth COVID-19 stimulus legislation (see VOX, the Leadership Conference, Wired, POLITICO, and the Center for American Progress). However, data show that Black voters use traditional vote-by-mail at lower rates than others and that election officials are more likely to reject vote-by-mail ballots of Black voters.

Washington Post reports on how a Milwaukee neighborhood is “figuring out how to fight back” as COVID-19 is severely impacting Black communities.

Van Jones wrote an op-ed calling for Black Americans to “wake up to this viral threat.”

Last week, video town halls and webinars on COVID-19 and African Americans were hosted by NAACP and BET, Revolt TV (with Rev. Sharpton and Van Jones), ESSENCE (on the CARES Act), and the National Council of Negro Women (Spencer served as a panelist).

Upcoming online webinars on COVID-19 and Black communities will be hosted by the Lawyers’ Committee (on April 15 focused on COVID-19’s impact on the right to vote) and Third Way (on April 15 with House Majority Whip James Clyburn (D-SC)).